Home » How To » Playing By Ear » Who Moved the Tonic? Part 1: Hearing Key Changes 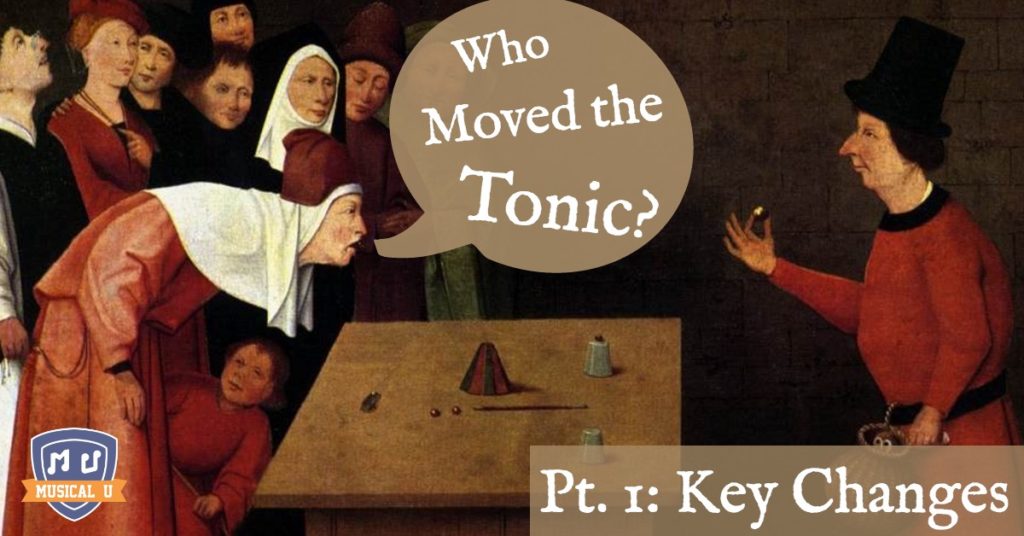 If you’ve been working on playing by ear – with or without solfa – you know by now that the tonic gives you most of the information you need to play and/or transcribe a melody without written music. It tells you the key, the scale, the accidentals, the potential chord progressions and more. And if you can pick out the subdominant (fa) and the dominant (sol) by ear then you can figure it out even faster.

Have you learned well how to find the tonic? If you still want more practice, dive into these articles:

We hope you followed the steps described in these articles, or that you are otherwise proficient in finding the tonic in most simple melodies – because now it’s time to make a great leap in our hearing.

Three Reasons Your Notes Are Wrong

As you’ve tried to apply your listening-for-the-tonic skills on other songs, there is a great chance that the recipe didn’t work out every time. You found the tonic, you knew the key and yet there was no way of finding the right notes on your instrument. If that happened, there are three possible reasons:

Let’s begin by focusing on key changes. We will talk about the aliens and take a sneak peek at modes in Part 2.

The Shape of My Modulation

At some point, as I said before, you might find it hard to find the tonic. Listen to the next example:

Listen closely to what happens from [2:28] seconds. Something changes.

Can you tell what happened?

”As upsetting it might be for you, it is a real burden for a composer to only stay in one key”

It is a modulation realized through a tonal leap. Modulation means changing the key inside a song. For example, this song started in F# minor, but at this point, it “jumps” to C # minor. C# is the dominant of F# minor. The two keys built upon the tonic and the dominant of a scale, either major or minor, are very similar – they only differ by one tone – and it is very easy to jump between them. That is exactly what happened here.

Listen to the tonic of the first part of the song:

And now listen to the tonic of the middle section of the song:

Sing the notes over the sections of the song and you will feel the tonic.

Reflecting on a Key Change

Let’s sing another example, this time remembering your childhood when none of this tonic talk could ever bother you.

Tonic of the Intro: F

Scale of the Intro: F minor

The first section is in F# Major and from [1:06] you can hear another key change, to A Major.

Play these notes on your instrument and sing them or play them over the indicated sections.

How could they jump from key to key like kangaroos?

Bach to a New Key

As upsetting it might be for you, it is a real burden for a composer to only stay in one key. Even Bach changed keys very often.

After [0:27] seconds, Bach gets bored of A minor (there is no point in asking you what’s the tonic since you can find it in the title of the recording) and moves to C Major.

Of course, A minor and C Major share the same musical material so there is no surprise in such a modulation, but it is a very rapid one. For an inexperienced musician, this could feel rather sudden – especially when we’re accustomed to most modern music, where we’re used to staying in the same key all the time. But, despite this modulation, the key of the song is considered A minor, so the tonic is still A.

Why Won’t You Stay in One Key?

Listen to this interesting song. The tonic seems to be C so the key could be C Major. But soon the atmosphere goes dark and it looks like we’re in A minor.

Find the A on your instrument and play it whenever the atmosphere goes dark. The bridge that comes at [0:51] directs the melody to the subdominant. Can you feel it? Look here  for our previous discussion of the power of subdominant and dominant.

Find the subdominant of C Major on your instrument and sing it over the beginning of the bridge.

Yes. just like that. It is time for you to take control! We gave you the clues, now it’s up to you.

But you can check if you got it right:

What is the key of this song?

It is still C Major.

All in the Family

While there are more complex modulations, the movement between closely related keys – one’s that you would find next to each other in the Circle of Fifths and between relative majors and minors are the two most common. They are especially easy to pull off, and quite effective in shifting mood according to the composer’s wishes.

Playing by ear, solfa, and transcribing become a bit more challenging here, but we can still make great use of the tonic – as long as we follow its movement. With your new understandings of key changes, you’ve just opened up your solfa, playing by ear, and transcription skills. It becomes more difficult when the melody is invaded by alien notes! Be on the lookout for Who Moved the Tonic? Part 2: Alien Notes and Modes.