Finding the Tonic in Minor Keys 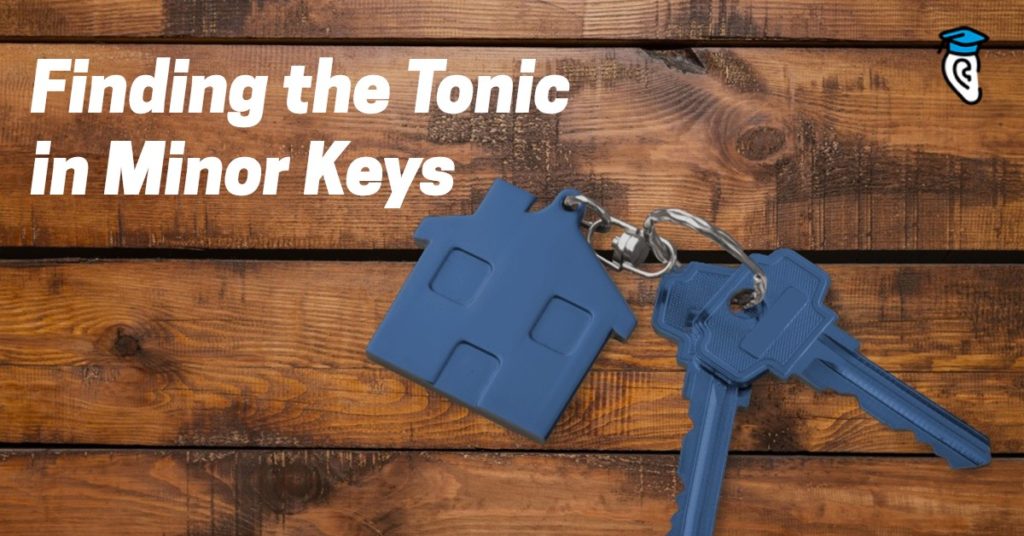 In the last article we talked about finding the tonic in major key melodies. We learned that the tonic feels like “home”, that it can help us deduce what notes to use when transcribing, and how it can help us understand the form of a song.

Considering what we already know, let’s start with a warm-up exercise in a major key. Listen to the following example:

Sing “do re mi fa sol la ti do” after listening. Now find “do” on your instrument. That is your tonic. So what key is this song in? If your answer is D♭ Major, you’re right. If not, review the last article on finding the tonic in major keys.

The next step is to identify the tonic of a minor key melody.

First we have to differentiate the “colour” of each type of key.

A minor key has a more sad, or intense, sound:

Don’t be worried if you can’t remember the melody: first feel the general mood. Then find the last note of the tune, in order to establish its key.

What was the last note?

Did you use any black keys or altered notes (notes with accidentals)? Was it bright or serious?

Here is the score of the melody:

Answer: The song ended on A, it sounded sad, it didn’t use any altered notes, so we can say the song was in the key of A minor.

Major keys can be described as happy, or bright. Listen to the next example:

Compare this with the first example. It’s actually the same melody – the raised third changes it from minor to major!

When you arrive at the tonic in a minor key, you can think of it as either “do” or “la”. The second choice is in easier alignment with the movable do system of solfa, so we’ll go with “la”.

Long ago, musicians noticed a special relationship between major and minor keys. They actually exist in pairs that share the same melodic material. The notes of a scale are like blood, so sharing the same notes is exactly like sharing the same blood. We say that these keys are relatives.

For each of the 12 total possible major keys there is a related minor key, the “relative minor”, whose tonic is on the sixth step of the parent major scale.

In the case of C Major, what is the tonic of the relative minor scale?

Remember that the relative minor key is formed on the sixth step of the major scale. Count C=1, D=2, etc. You’ll find that the relative minor key of C Major is A Minor. It will have exactly the same notes as C Major, but because we start on A it will be minor sounding. We will not provide audio for these two examples, so play them on your instrument:

Let’s listen to the next examples and determine whether they are major or minor:

Which one was in a major key? What was the tonic?

Was the other melody major or minor?

Check your answers with the written music:

Example 3 is in a minor key, E minor.

Example 4 is in a major key, D major.

Finding the Tonic in Minor Keys

We find the tonic in minor keys just as we did for the major keys, by listening for clues. The first step is to identify the last note of the melody since that is often the tonic.

What was the last note you heard?

Here is the written music:

Did you hear the right ending note?

All the notes from the scale are not required to feel the minor or a major character of a melody.

What was the key of this song?

What was the key of this song?

You probably noticed that there are different ways to end a minor melody. Learning about these can offer more clues for identifying the tonic note.

A harmonic progression that leads to the end is known as a cadence. We seek to understand cadences because the feeling of the tonic is emphasised by it. At the end of a cadence, you will most likely find the tonic.

Until now, we listened to melodic examples (i.e. no harmony) but when it comes to minor keys, there are a lot of possible harmonic cadences which help us find the tonic. Let’s look at how chords are built and how are they related to the major or minor keys.

Each melodic pitch is actually part of a chord structure formed on the steps of the scale. So knowing which note belongs to which chord is very useful.

For example, there are two choices for the seventh note of the minor scale:

Here are some of the common ways to end a minor key melody or chord progression that you will encounter:

Using v leading to i, both minor chords, presented either as harmony or implied by the melodic movement:

Similar to the above but where V is a dominant chord i.e. a major chord:

Ending with the I major chord (instead of the more expected i minor) forms the cadence known as the Picardy Third:

The last example shows a cadence popular during the Baroque period, with composers such as Johann Sebastian Bach, Antonio Vivaldi or Domenico Scarlatti.

Listen to the next example. Which of the common cadences above do you hear?

The V major-i minor here points you right to the minor tonic note, because the seventh step of the scale is deliberately raised to produce a leading tone, increasing the attraction as the dominant leads to the tonic.

The contrast between the major V and the minor i heightens the effect:

Compare it with the v–i cadence. Here the dominant chord is minor, which uses the subtone.

As we have seen, identifying the tonic note in minor keys consists of recognising the key is minor, and using the notes of the melody and harmony along with certain “clues” to identify the tonic note. Often this will be the end note of the melody, as with major keys. It’s important to know about common minor-key cadences to help you tune your ear into the role of the tonic in these harmonies.

With this knowledge in hand, you are well equipped to start listening for the minor key tonic. In the next part of this tutorial we will go through some practice exercises and try applying your new minor key tonic skills to real musical examples.