Home » How To » Playing By Ear » Who Moved the Tonic? Part 2: Alien Notes and Modes

Who Moved the Tonic? Part 2: Alien Notes and Modes 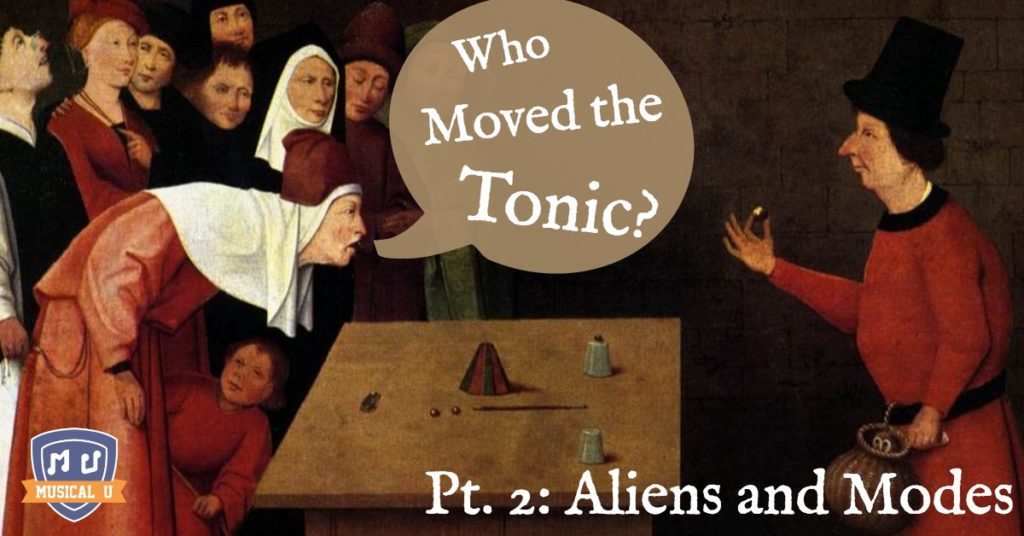 Oh yes, the tonic! That wonderful “one” that says it all! With a little scale knowledge, and maybe a smattering of solfa or an inkling of intervals, once we know the “one”, the tonic, the do, we can figure out just about any melody we want to transcribe.

Did I say, “Just about…?” Yes, there are certain cases to consider:

Let us begin Case Number 2 with this question: what would you say if you met an alien?

Take Me to Your Leader

Even with its modulation, Hozier’s “Take Me to Church” seems fairly standard at first:

In the key of E minor, this song plays with the moods of the listener. Of course, you just passed through a tough series of ear training tutorials, so you’re not just listening. You’re looking for clues.

So we are talking about G Major.

When you transcribe the notes from this melody, don’t worry, the notes to pick from haven’t actually changed:

But at the last “Amen” there seems to be a… problem.

Theoretically speaking, if you know the tonic, you know the key. Thus you know which notes fit and which don’t and also which notes form your chords – since all the chords from a tonal melody use the musical material of the key it’s played in. And here you will notice that no “native” chord could work. There are some alien notes.

Even so, the key is still E minor. The tonic is still E.

As you heard in the previous example, it’s very hard to replicate the atmosphere from the last “Amen” only by using the notes and the chords form E minor or G Major. That means we have some alien notes.

They could appear because of modes or due to melodic and harmonic versions of the minor keys (another very long discussion we will have after you get more comfortable with finding the tonic). Or they might be chromatic notes used to enrich the melody.

For the simple purpose of learning and transcribing songs by ear, you needn’t care much about how they work. Just localize them with the intention to identify them on your instrument – and don’t be surprised when you hear them.

Who knew that Scott Joplin was possessed by aliens?:

The tonic of this song is C. The song is in C Major. But you can see that in this video there are also black keys used. So the overall scale of the song should include those too, right?

But then we’re not talking about C Major, because C Major has no altered sounds.

The truth is that even so, our tonic is still C and the scale is the same as we knew it. Those chromatic notes are only passing notes which enrich the melody but they are not real notes from the scale. They are not emphasized. They are only a way of coloring the music.

That was so weird. After so many solfa tutorials, major and minor pentatonic and diatonic scales, this might leave you a little bit confused. But the strange notes are not “real” notes in the scale.

We Come in Peace

This song goes from A minor to A Major at [0:56]. But the overall key of the song is still A minor, because in the end the sonority of A minor imposes A as tonic and a dark atmosphere.

Sing “A” over the beginning of each section.

But sometimes no scale can help you because there are notes that don’t seem to fit.

Take the next example:

In solfa, you could translate the scale like that:

You will also find it in rock music.

Anouk’s beautiful “Sacrifice” may seem at first like a standard major key:

The song’s scale is Eb F G Ab Bb Bb C Db Eb. Again, like a major scale with no leading tone. It is again the mixolydian:

You just saw how two different genres use the same type of scale and they get to sound that different.

And yes, there are other modes.

Let’s chill out with the most common minor mode, the dorian:

Compared to the major scale, we’re lowering the mi to me and the ti to te:

The problem of finding the tonic is solved when you think of the direction followed by the music. When you feel that music gets “home”, you can say for certain that you found the tonic.

In all these cases, the tonic is still your foundation stone. Identifying the tonic gives you heaps of information about the song – melody, chords, and bass line.

And once you know what you’re deviating from, you’ll begin to hear the deviations themselves more easily and precisely.

While most popular music avoids them, now that you’re aware of key changes, alien notes, and modes, you no longer need to fear! Pack your bag of solfa, interval, and music theory skills and venture into playing and transcribing classical, progressive rock and even jazz by ear.