Hearing Chord Progressions, Part 1: the Dominant and the Subdominant These days chord progressions so accessible. Just a few clicks and you can pull the chords for most any song off the internet. That’s great, as long as whoever posted those chords got it right. But how would you like to be able to walk into any musical situation and already know the chords to any song, simply because you brought along your ears? Or easily figure out chords for your next song? When you learn to hear harmonies, this magical skill is well within your grasp.

Bass is the Place

Melody notes, of course, are most easily identified and can be very helpful in identifying harmonies. But the bass in a song most often outlines the root notes of the chord. So often we can figure out entire chords simply by identifying the bass notes, which is what we will mostly focus on here.

The Main Steps in a Scale

It is said that you can accompany any tonal song only by using the chords built upon these three steps. It is true, because together they contain all the notes from a key. It is also true that a melody is based on secondary steps will somewhat bland if harmonized with only the three main chords. So even if, theoretically speaking, they work, often other chords are substituted which sound more colorful.

Hearing the tonic is fundamental to hearing harmonies. Let’s look at the most important things about the tonic:

If you want a brush-up on hearing the tonic, read these posts:

You will notice that the dominant and the subdominant can appear below or above the tonic. Of course, changing the octave doesn’t change the function or the role of a chord.

As a warm up, let’s practice different ways of ordering these main steps:

Tonic-dominant-tonic, with dominant above tonic

Tonic-dominant-tonic, with dominant below tonic

Tonic-subdominant-tonic, with subdominant above tonic

Tonic-subdominant-tonic, with subdominant below tonic

After these exercises, you should be able to recognize the patterns in the next examples.

Remember that the dominant is the fifth step of a key. Let’s practice.

In solfa, do is the tonic. What is the name of the dominant?

Tip: Count five steps, starting with do. The syllable you arrived on at number five is the dominant.

Tonic or Dominant: Which is Which?

The dominant, when played by itself, can be confused with the tonic. Some people will actually sing the dominant at the end of a song. The dominant “blends” with the sound of the tonic, so they can mistake it with the “home” of the song.

This is not such a weird thing In fact, because the dominant, which is a fifth from the tonic, is present in the series of overtones very close to the tonic, so it’s very present in its sound. In fact, there’s a whole music theory built on the fifth.

When we hear a sound, we hear a lot of frequencies, but the loudest one is called the fundamental. The rest of the sounds we unconsciously hear are called overtones.

So when we are building chords based on stacked thirds, we are actually emphasizing sounds already contained in the fundamental.

So when you sing the dominant over the tonic in a song, you might feel at “home” because the fundamental sound of the dominant is the fifth of the chord built on the tonic: 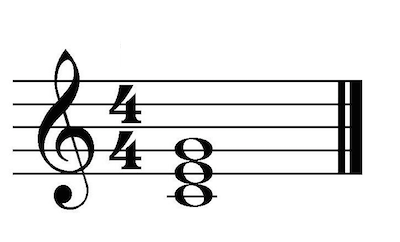 It might not be your issue, but confusing dominant for tonic is a surprisingly common problem.

Tonic and Dominant: the Musical Playmates

Let’s assume that you don’t have problems in telling if you’re singing the right sound or not and let’s play a little with the dominant and the tonic.

The first five steps of a diatonic major scale

Now sing the emphasized sounds in this order: tonic-dominant-tonic. It is important to return to the tonic, because the whole concept of hearing the intervals is relative. We must establish some fixed orientation points and the tonic is what we need in this case.

More Practice with Tonic and Dominant

Sing with these examples:

Here you heard the dominant sung above the tonic. A common practice is to play the dominant below the tonic, and then it sounds like this:

The first two notes of the Romanian anthem are exactly the dominant and the tonic of a minor key, but here the dominant is below the tonic, like this:

Now let’s see how this sounds going from the tonic towards the dominant:

On the lyrics “de bon matin” we have the progression: do do-sol (on the syllable “ma-”) –do (on the syllable “-tin”). Again we can hear the dominant below the tonic. And don’t forget to notice that this song is in a minor key:

“Deseapte-te, Romane” and “La marche des rois” are two great interval reference songs for the perfect fourth (which is, after all, an inverted fifth)

Question: What syllable do we use in solfa for subdominant?

Let’s sing the major scale and emphasize the fourth:

Now let’s try to identify the sonority of the subdominant in a few songs:

Let’s begin with one of the most famous pop melodies of all time:

The first two chords are not tonic-subdominant in this example, but tonic-dominant. In the melody, the dominant is sung below the tonic. But at the end of most of the sections you can hear this emblematic “Let it be” motif:

“Let it be” motif

Here the subdominant is above the tonic:

If you didn’t hear it clearly enough, sing the “do-fa”, as in our example. Count four beats on each note.

Here the chorus also contains the tonic and subdominant, but in an inverted form.

This is what you heard in the bass line:

Although the song starts in a minor key, the chorus is in D Major.

Call Me the Breeze

In this Lynyrd Skynyrd song, very blues-inspired, you can hear a clear tonic-subdominant progression starting at [0:30] and ending at [0:36].

Try to hum the first notes you hear from each bar. Now this is a tough one, because the bass is very melodic and you have to be fast in hearing the first note of each bar.

This is actually a standard blues progression.

Question: What are the actual notes?

Here the subdominant is placed below the tonic:

This is what you heard:

Write down the root notes of the chords used in the first four measures of the next song:

If do is D, what real notes are fa and sol?

Next time you’re figuring out a song by ear, transcribing, playing the blues or at a jam session, try this: rather than trying to hear and identify each individual chord, listen for the bass line “melody” of the tonic, dominant, and subdominant. Hear these three simple notes and, in most cases, you’ve practically identified 90-100% of the chord progression in any given song. In Part 2 we will look further into these chord progressions themselves.