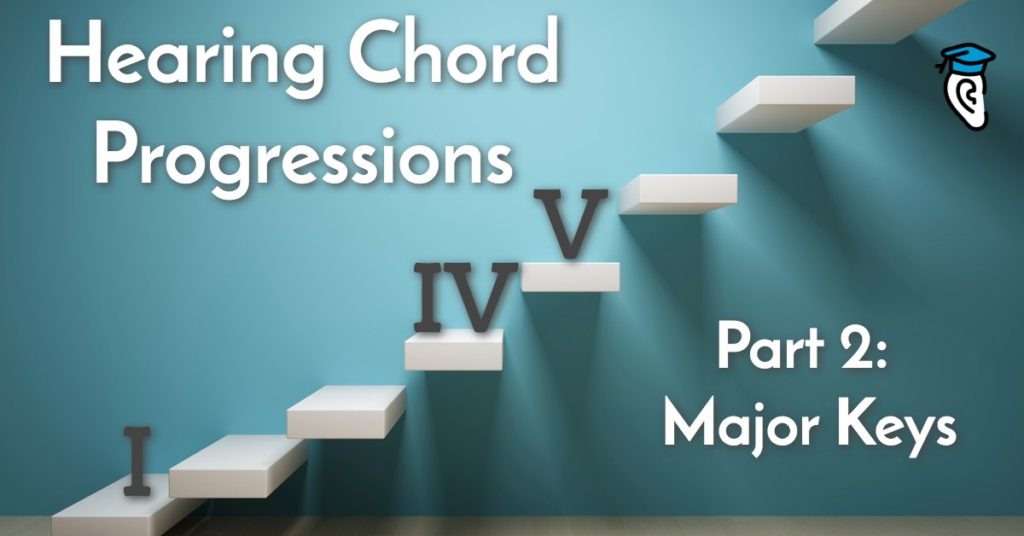 With the ability to hear and identify chord progressions, you can walk into a host of musical situations and play along by ear. Last time we took the first step by learning to identify the chord roots in the bass line: tonic, subdominant, and dominant. These are the three chords that form the bedrock foundation of western harmony, and often the bass note alone is enough for us to identify the whole chord.

Of course there many possibilities beyond I, IV and V. But right now one step at a time moves us gradually into a more complex zone.  So first we will talk about these progressions in major keys and then continue our story with the minor in future articles.

In these articles, we have been using three different sets of names for the chords built on the three main scale steps. It is good to learn them all interchangeably, because they each have different implications, and you will be able to communicate with a wider range of musicians:

Here’s a shorthand way of looking at it:

Remember the tonic-dominant-tonic examples, with dominant above and below the tonic?

If you still have problems here, go ahead and review Hearing Chord Progressions, Part 1: the Dominant and the Subdominant. Don’t worry—we’ll still be here when you return!

That was quite easy, because we told you when to expect the dominant and when to expect the subdominant. The next exercises force you to work your ears very intensely. Here we’ll come one step closer to real music by composing little songs with the progressions. Recognize which of the following examples are I–V or V–I progressions and which are I–IV or IV–I.

Real music often combines these chords in an even greater variety of ways. Learning how to recognize them helps you easily accompany songs and memorize them.

Enjoy the following examples. Sometimes the transition is short. And sometimes it takes several bars to move from one chord to another. Sing the melody from the bass line and you will actually feel the harmonic movement.

We start where we left off last time: “Authority Song” by John Cougar Mellencamp

Beginning at [0:17], you’ll hear one bar of do, and in the next bar two beats fa and two beats sol. The whole song is built upon that structure. Of course, the bass line is constructed on more than these three notes, but guide yourself by the notes from the downbeats (the accentuated beats). These are indeed do, fa and sol.

What is the key of the song?

Another famous example of how to use I, V and IV progressions is the song “Imagine”. Listen to the intro.

What was the first note in the bass?

The intro is built on three chords. But you can hear the bass line playing only two notes:

In fact, on the fourth beat of the first bar of the intro you can also hear the dominant. So the correct harmony would be:

What is the key of this song?

After [1:16],  listen for the bass outlining the harmony.

What did you hear?

These are the only variants you will get, since we don’t want to make it harder. Yet.

Listen here for a hint:

Whenever God Shines His Light

The next example is a beautiful piece showing how the octaves and other elements from the chords of the main steps can be used to create diversity in a song. Listen the fragment starting at [0:13]. There you will hear—on the accentuated beats—the notes defining the harmony for the verse of the song.

Tonic, subdominant and dominant: three little steps, so much music! Now that you’ve been practicing, you’ll begin to notice them everywhere. Where to next? In “Hearing Harmonies, Part 3” we’ll see how the minor keys present their own set of variations. In the meantime, surprise yourself with how many songs you can play with I, IV and V in major keys.