“A poorly-played note well placed is better than a well-played note placed poorly.” What does that mean, exactly? In Western music, rhythmic skills often seem to take a “back beat” to melody and harmony. Yet rhythm and percussive instruments not only drive the music, but are the oldest known forms of musical expression.

That isn’t to say that melody and harmony aren’t important! While rhythm is truly the super glue of a performance, honing your ear to hear harmony is just as important. However, from time to time, it’s more important to stay in tempo rather than to play a perfect note.

In fact, it’s been suggested to never turn your metronome higher than 40 BPM! (Unfortunately, Toblerone got the memo.)

Before we get our groove on, let’s take a look at what’s happening at Musical U this November! Musical U found an excuse to continue celebrating Halloween into November, with a new training module that allows you to analyze Halloween-themed music. Whether you’re a Halloween fan or not, picking a particular genre and diving deep into what makes it sound like it does is a really useful exercise.

If you’ve been following their What’s New in Musical U series, you’ll know they’ve been developing an interactive quiz system to improve the existing one inside Musical U and this month witnessed a further rollout to the Chord Recognition: Triad Inversions module.

Musical U always has your success in mind and now makes it even easier with updates to the Planning for Success Module and improvements to the Roadmaps system. With the ability to hear and identify chord progressions, you can walk into a host of musical situations and play along by ear. In part one of our series, Hearing Chord Progressions , we learned to identify the chord roots in the bass line: tonic, subdominant, and dominant. In the second part of our series, we delve into listening to how these three bedrock chords sound and function in major keys. Once you start listening to them, you might just start hearing them everywhere!

Test your ability to recognize the tonic, dominant and subdominant! In this video, Music With No Pain gives you ten sequences of four chords each to test your musical knowledge.

Fretjam has a great article looking at the basic theory behind the subdominant and its function in major key chord progressions. They provide some clear charts and examples to help train your ear.

The Origins of Klezmer 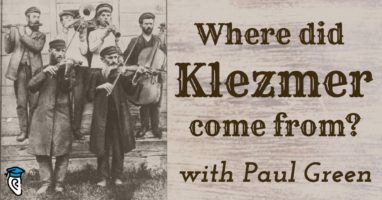 What do you think of when you hear the word “Klezmer”? For some, the very word oozes funkiness. Others have yet to be exposed this music genre, which is half ecstatic dance, half mournful cry. For those of you who have never really heard Jewish Klezmer music, we recently had the opportunity to ask one of Klezmer’s foremost 21st-century proponents, Paul Green about this mysterious music genre. In part one one of our interview with Paul, he takes us on a journey into the history of Klezmer, which has its roots in eastern European Jewish folk music.

In the 1920’s Klezmer influenced jazz, then went quiet, and finally enjoyed a revival beginning in the 1970’s and 1980s. For more on the history of Klezmer music, have a look at this in-depth article from World Music.

Klezmer music is all about expressing yourself to the maximum! In this video, clarinetist Corrado Giuffredi gives you an inside look into some of his favorite Klezmer techniques.

Were you as impressed with Paul Green as we were and would like to learn more from him? Have a look at Paul Green in his own words, describing Klezmer music in-depth.

Rhythm is often referred to as the heartbeat of an ensemble, with the percussion providing the pulse. Broadly speaking, a percussion instrument is anything that makes a sound when struck. However, since they are not as “striking” as the wood and string families, percussion instruments tend to receive less attention than their more glamorous counterparts. Don’t be fooled by their simplicity, though! Can you imagine an orchestra or band without them? Musical U introduces you to percussion instruments, including the history and classifications of these ancient time-keepers. Rhythm! Discovery Center has a page dedicated to the study of major percussion instruments. Click on the link below the instrument to learn more about each one.

Did you know that drums date back to at least 5500 BC? For a complete visual history of drums, have a look at this interactive timeline provided by Soft Schools. What exactly does the word “beat” mean, anyway? That little word has only one syllable but, oh, so many meanings! In the music theory world, “beat” is simply a musical measuring device, much like pitch measures highness and lowness of sound, and amplitude measures loudness and softness. However, when you really start to take a look at all the different connotations of the word “beat” in music, a whole new world of meanings open up! Musical U takes a deeper look at this powerful tiny word, and breaks down all the different ways in which it can be discussed in music.

“A music’s beat helps us to measure out how long or short sounds in the music should be and how they should be arranged”. In this video, Dave Conservatoire explains how to measure smaller beats within the main tempo:

The difference between beat and rhythm is often misunderstood in music. Mr A Music Place defines both beat and rhythm and discusses the common ways in which they are misused.

Are you looking for a way to teach the difference between beat and rhythm to kids? Let’s Play Music suggests starting with familiar songs and nursery rhymes. As we said, rhythm is the heartbeat of music. Yet, rhythm is a weak point for many musicians and a frequently-overlooked part of their training. With the focus on other priorities in Western music, even well-trained musicians often struggle to keep time without the crutch of a metronome, click track or even their colleagues. One percussionist has proposed a method to help musicians improve their inner clock. Mac Santiago, author of the book “Beyond the Metronome” suggests that we find our “inchronous” self to break our dependence on the metronome.

Are you looking for an example of how to employ the inchronicity method? In this video, Beyond the Metronome demonstrates time-keeping exercises from Mac Santiago’s book:

Trumpeter Jon Kratzer has written a great post, which is a culmination of the tools he learned over the years in learning to develop a good sense of inner rhythm.

Try taking this 30-day guitar challenge from guitarist Keith Wyatt! Seeing how close you can stay to the beat—without hearing the metronome—is a great challenge for all disciplines of music.

From Klezmer to percussion, we have so much to learn from the history of other cultures and how people in the past and present approach music and music learning. As we often say, the more you know about music, the more you will enjoy it!

Taking the time to… well… learn time has endless benefits, and the importance of rhythmic training should not necessarily be demoted to second or third place simply because Western musical culture currently dictates it.

We leave you with this public service announcement: “No Noodling!”