Speaking of Rhythm: What does “beat” really mean? 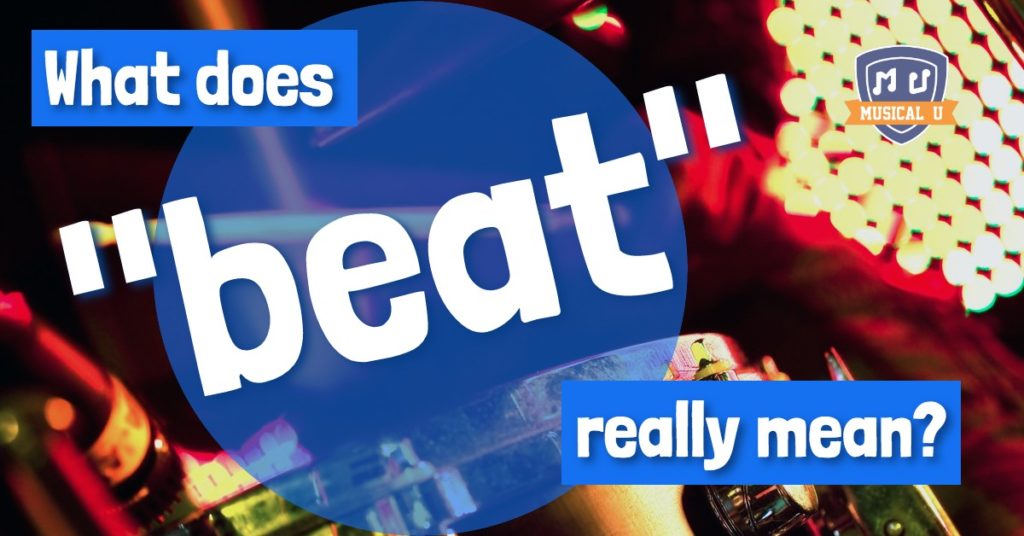 Have you been reading about music? Commented about music on social media? Had a lively conversation with your besties about your favorite songs?  Sometimes it seems like we spend more time—and a whole lot more words—talking about music than we do making it!

So why all these words about music? After all, can’t the music speak for itself?

When we talk about music, we seek to understand and articulate its structures, meanings, and how it fits in to our culture. By doing so, we can make more informed musical choices in both our listening and music-making.

We come up with all kinds of colorful expressions to describe these musical experiences in our casual conversations. Oftentimes, these casual terms wrap musical structure, emotion, meaning, and cultural embeds all up in one clever package. At the same time, musicians and music theorists have sought to carefully distinguish one musical element from another. So, for more accurate communication, they try to keep the meanings of each musical word within tight boundaries.

In the spirit of increasing our understanding of music and our abilities to produce it, let’s look into one of the most common cultural musical idioms—the one little one-syllable zip-file “beat”—and unpack it with the language of music theory.

In the common language, the term “beat” has two separate, but related uses:

I’ve never heard someone say that a song had a bad beat, unless we’re talking super-bad—which, when I was growing up, meant good. But I digress.

Next time you hear someone say this, ask them what they mean—and watch them squirm, “Well, you know, it’s like… “ Oh I know, you’re not the cruel type. So let’s figure it out here.

There’s a reason why a “good beat” is so hard to describe: it’s really a feeling, a sensation in our body, the way we want to move when we hear the music. One thing we know: it’s not about the vocal line. And you won’t hear anyone say that a piece of classical music has a “good beat.” This brings us to a fundamental characteristic of popular music that comes to us via west Africa.

The predominant texture of 99% of the world’s pop music consists of a vocal line plus a layering of more-or-less repeating rhythmic patterns in the instruments. Music theorists refer to these patterns as ostinatos. The possibilities are endless! When the artists hit upon a particularly distinct combination of layered ostinatos, the song can be considered to “have a good beat.”

Listen to the intro to Stevie Wonder’s Superstition. It begins with the drums and adds the instruments one at a time, building a complex, irresistible rhythmic underpinning that continues throughout the song.

Contemporary rap music has given rise to another meaning of the term “beat.” Here the entire musical content apart from the vocal is considered the “beat.” Producers will compose beats as background music independent of the vocal. Rappers will then select from a variety of beats to “rap over.” YouTube is chock-full of beats for sale:

Beat as the Pulse

It’s easy to see why we might prefer the shorthand expression “That song has a good beat” to “I enjoy the physical stimulus produced by the complex interactions of the layered ostinatos produced by the hybrid chordophones, electrophones and membranophones.”

But the word beat (which originally meant “to strike repeatedly”) actually has a very specific musical meaning. Music theorists describe it as the steady “pulse”: the heartbeat that underlies a piece of music. This pulse may be explicit in the accompaniment to the melody,

In the second example, the melody is the same, but the accompaniment does not emphasize the beat. Yet the steady pulse of the beat can still be felt and brought out.

For western music, the beat is a sort of musical yardstick. It lines everything out and gives us the long and short of things. And it’s very convenient for musical notation, click tracks, adjusting tempos, and everything rhythm. 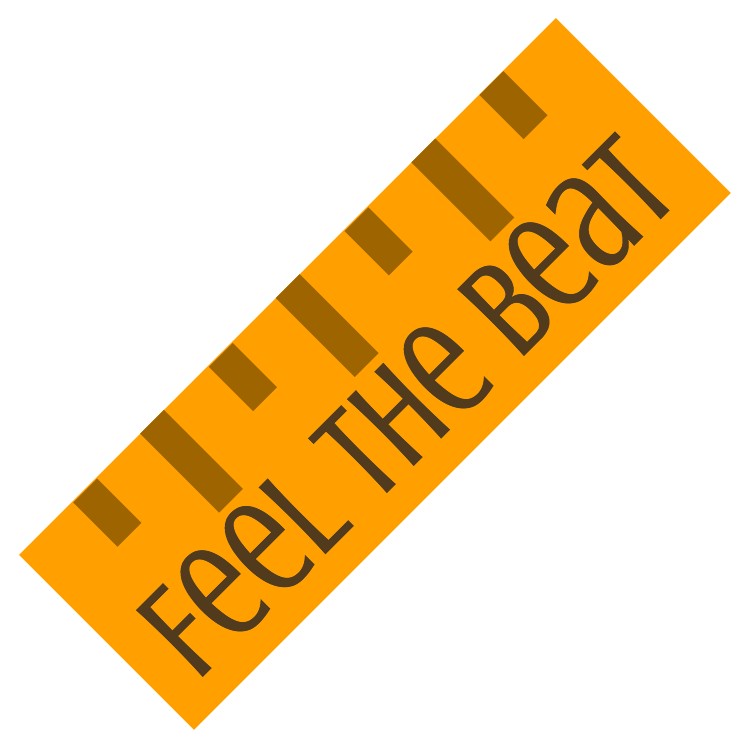 So in the music theory world, there is no such thing as a “good” beat—”beat” is simply a musical measuring device, much like pitch measures highness and lowness of sound, and amplitude measures loudness and softness.

What about “Upbeat Songs”?

“Upbeat” is a fascinating little word. In my songwriting classes, students have frequently described certain songs with the adjective “upbeat”—pronounced “up-beat,” with the accent on the second syllable. When asked what this means, the student replies, “Happy? Feels good? Lively?”

Note the question marks. While these emotion-words are common synonyms for the adjective “upbeat,” there’s still something lacking, some specific quality that eludes emotional description. Over the years I have determined three more qualities of “up-beat”:

“Up-beat” is a great example of how emotional, cultural, and musical qualities wrap themselves into one popular musical idiom. But what does music theory have to say about it?

This musical term—with the accent on the first syllable—is quite a different word. “Up-beat” is a noun that identifies the way certain notes are played.

Music theory divides the musical yardstick into strong and weak beats. This tendency is known as “meter.” Most frequently, these metrical divisions come in multiples of either two or three, with quadruple meter being the most employed by popular musicians.

Notice that the strong beats tend to be played louder than the weak beats. Here’s what happens if I reverse that tendency:

Music Theory calls the first beat of the measure the downbeat. Accordingly, the preceding unaccented beats, which sound at a slightly lower volume and lead up to the downbeat, are known as the upbeats.

So the concepts of “upbeat” and “downbeat” describe the position of a note in the rhythmic pattern, and our dynamic approach to it. That’s a mouthful for a couple of small syllables!

One little syllable, so many meanings! And don’t even get me started on the dictionary definitions…

Ok, so it’s not enough to write entire books, blogs, and websites about music—now we’re writing words about the words about music? Well hey, (as editor of the Musical U and Easy Ear Training blogs) without these words I’d be out of a job!

Take a moment to consider how you talk about music. Thinking about these words helps us further understand what’s really going on in the music we love.