Home » Ear Training » Genres » Where did Klezmer come from? (with Paul Green)

Where did Klezmer come from? (with Paul Green) Klezmer: the very word oozes funkiness. Where did this mysterious genre of Jewish music—half ecstatic dance, half mournful cry—come from? We spoke with one of Klezmer’s foremost 21st-century proponents, Paul Green, about the origins and development of the klezmer genre in Eastern Europe and the United States.

Q: Welcome, Paul, to Easy Ear Training. I’m very new to Klezmer, and I’m intrigued by your website and your music. For someone who’s never heard of the Klezmer, how would you describe it?

In its origins, Klezmer is eastern European Jewish folk music. Like a lot of folk music or dance music it had a specific function at various events—including weddings, bar mitzvahs, even a bris (circumcision ritual). In the European 19th-century Jewish weddings, which were much more stylized, specific songs would be used as transitions from one section of a wedding to another. There would be a dance for the seating of the bride, there’s a dance for escorting the in-laws home—these were all parts of the wedding ceremony. Then there were different types of klezmer music for dancing, at the celebration, at the reception. There were even special tunes for the band leader show himself off.

The music comes from a lot of different sources. Interestingly, the klezmer music was very much aided by the rise of the Hasidic movement in Eastern Europe in the 18th and 19th centuries. In reaction to the rigorous, cold intellectualism of the prevailing Jewish culture, the mystical Hasidim sought God in the sanctity of life in all its joyful expression: eating, drinking, dancing—and music.

In fact, Reb Nachman of Breslav, one of the most famous Hasidic rabbis, taught that attachment to God is primarily attained through melody.

The Hasidim would invent these little wordless melodies to induce an ecstatic state of communication with God. These wordless prayer melodies were called nigunim. A lot of these prayer melodies made their way into the klezmer music. The klezmer music took some of these melodies and wove tunes out of them. Here’s a famous klezmer melody called “Der gasn nigun” which means “The Street Tune” (plays the clarinet) 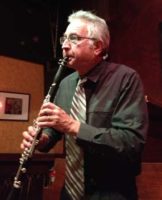 Is it note-for-note from one of those prayer melodies? My guess is that it started that way, then morphed a little into a klezmer tune. So Hasidic music is one of the primary Jewish streams that fed into Klezmer.

A lot of it is, as I said, it has a certain social function, whether it would be to dance to like a freilach, a happy dance, or a more slower dance, for example, a sher.

Not all klezmer came from strictly Jewish sources. A lot of the forms were originally borrowed from the surrounding countryside in which the Eastern European Jews lived. In the 19th century, there was an area in Eastern Europe called The Pale of Settlement where most of the Eastern European Jews were permitted to live. It encompassed several countries—parts of Hungary, parts of Ukraine, parts of Romania, parts of what’s now Russia. The show Fiddler on the Roof is set in the fictional town of Anatevka, modeled after the shtetls (small Jewish towns) in The Pale of Settlement.

The Jews were a separate population, but they lived in the midst of these other countries, each with its own music. A lot of Jewish musicians, particularly the good ones, would play at non-Jewish functions and they’d pick up these non-Jewish songs, and then they would bring them back and incorporate them into their own stuff. One of those is called a sher. Similar to an American square dance, the movements of the dancers mimic the scissors of a tailor cutting patterns in cloth. Q: Wonderful. How did it develop after that into the 20th century? Was there a continuing melding with other genres, other styles, or other traditions?

It’s always been that way. That’s the history of the Jewish people in a microcosm. Taking from other cultures, combining it with your own and making something out of it.

Q: I understand that’s a real specialty of yours, this Jewish jazz fusion. Is that because early 20th-century klezmer blended with jazz?

Well, what I’ve done is of course much later than that. The klezmer music that was played in the United States in the early part of the 20th century wasn’t so much influenced by jazz music as it was by some other jazz elements. For example, many klezmer bands borrowed popular Dixieland instrumentation—clarinet, trumpet, trombone, bass or tuba, trap set and piano or accordion. The drummer was freed up to accentuate the melody with rolls, rim shots, wood block, and cymbal work. Also both early jazz and 19th-century Klezmer were more ensemble arts. Then Louis Armstrong came along and made jazz into a soloist’s art. He was the first great soloist in jazz. That influenced klezmer music in the United States because the Jewish musicians started behaving the same way—they started developing their own great soloists.

There were two clarinetists in particular who were the great klezmer soloists of the first half of the 20th century. Dave Tarras and Naftule Brandwein are the fountainhead for 20th-century and now 21st-century klezmer style in the United States, because they made a lot of recordings, they were featured as the soloists, and they influenced the way people played the music, and even what kind of songs people played. 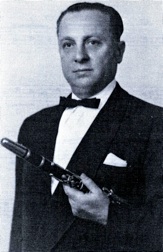 The most popular tune in American klezmer is the bulgar or freilach—”bulgar” referring to the Bulgarian-inspired rhythm and “freilach” referring simply to happiness. One of the reasons that the bulgar is number one: it’s happy and lively and people like to dance to it.

But another reason is that Dave Tarras particularly liked to play bulgars. When he came to the United States he recorded a lot of them and he even wrote a couple of them on his own (although most of these tunes were anonymous) and it became the quintessential American klezmer tune. That’s most people think of when they think of klezmer music—a fast happy thing. Here’s a typical Bulgar:

That’s a nice fast lively thing that you can dance to.

Tarras and Brandwein represented the yin and the yang, the two opposite poles of klezmer music—or even music in general: happy versus sad, studied versus improvisational, sober-minded versus rambunctious…

Tarras was very straight-laced and sober-minded. He always showed up on time for the gig. Brandwein was a notorious drinker and impossible to room with on the road, but much more improvisational and kind of wild in his playing. It was Dionysian versus Apollonian—or something like that. But together they forged the development of modern klezmer music. Fascinating. Thank you so much for this trip into the history of Klezmer. Your live demonstrations have been delightful! I look forward to learning more about this colorful tradition and how it has evolved into the 21st century.

It was such a treat for us to have Paul’s clarinet speak up during the interview. We’ll be learning more about the forms and musical structures of Klezmer—and about Paul’s klezmer-jazz fusion—in later installments of this interview. Until then, immerse yourself in the funky poignant klezmer world of Naftule Brandwein, Dave Tarras, and listen to Paul Green himself.