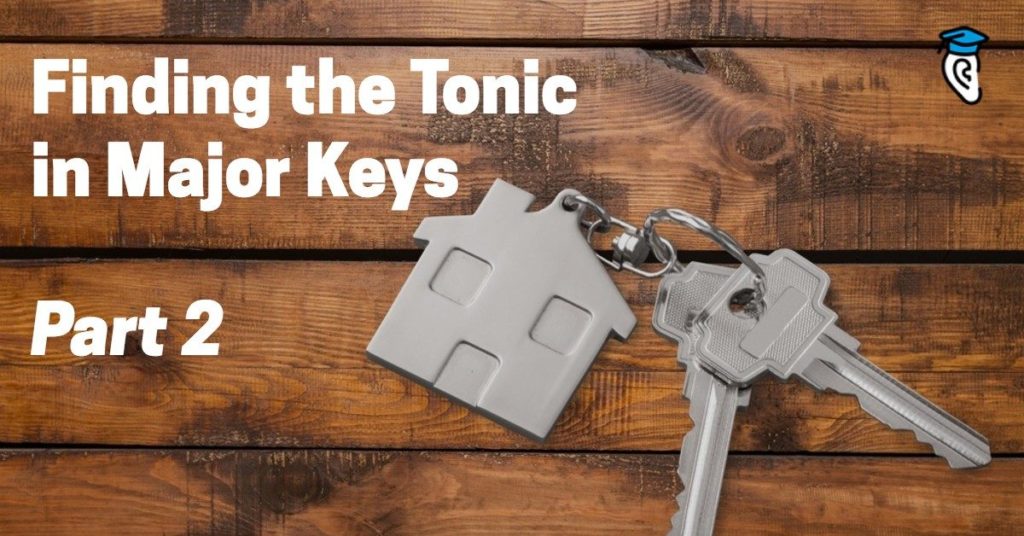 Welcome back to this tutorial on finding the tonic in music. In Finding the Tonic in Major Keys, Part One we covered the importance of the tonic and looked at some simple examples of how to recognise the tonic note by ear. This time we’ll be practicing recognising the tonic in real music recordings and looking at some of the common confusions you might encounter when trying to hear the tonic.

You can think of the tonic as the “home” note in a piece of music. It’s the basis for all the beautiful melodies and harmonies. Without the tonic we would be lost in a mix of seemingly-random notes.

That’s why it’s essential that you learn to recognise the tonic by ear. This will help you to:

and more! So you can see that learning to hear the tonic brings many benefits, whatever kind of musical life you lead.

Our method for finding the tonic is based on listening for “clues”. The tonic’s relationship to all the other notes in a piece of music reveals itself in various ways, and by familiarising ourselves with how the tonic sounds we can learn to spot it easily when listening to music.

Here are a few clues from Part One of this tutorial:

At first it may take you some experimentation to be confident you’ve correctly identified the tonic. With practice you will find it becomes second nature and you automatically just know which note is the tonic.

Right, with all that in mind let’s move on to the real task: hearing the tonic in real music like you listen to every day!

Listen to this familiar folk example and try to find the tonic note.

Try to sing back the tonic note you identified. Then you can use your instrument to find the actual note. Ask yourself these questions:

Here is the score to check your answers:

You can apply the same way of thinking to the next examples. Focus on the melodic line of the first verse:

Let’s also try it on the classical repertoire:

You can check your answers at the end of this tutorial.

You might find that, for example, G was the last note you heard, yet you are not in the key of G Major. It’s a common practice to end a melody on another note besides the tonic, which is present in the chord built on the tonic (the I triad chord).

The only way to get it right is to listen to the harmonic concept and to identify the cadences.

Listen to the same example again, now with two-voice harmony:

You can hear that, besides the final E, now there is a C in the lower voice which states clearly the key of this piece.

When you are uncertain whether or not the last note is the tonic, listen for the lowest note in the music (usually played on a bass instrument) and see how that works.

These are some common problems we may encounter in our search for the tonic:

How Did You Do?

Here are the answers to the examples above:

Were you able to correctly identify the tonic? If not, go back and take another listen while playing the correct tonic on your instrument (or singing it). Try to hear the role that note plays in the melody and harmony of the piece.

You have seen that in your search for the tonic, a few simple rules go a long way:

Being able to reliably and easily hear the tonic is a fundamental skill for any musician – but it does take some practice! Keep finding opportunities to listen for the tonic. Every piece of music you listen to is an chance to ask yourself “Can I hear the tonic?” and then check your answer. The more you practice the easier it will become, and soon you will instinctively know your “home” in any musical situation.