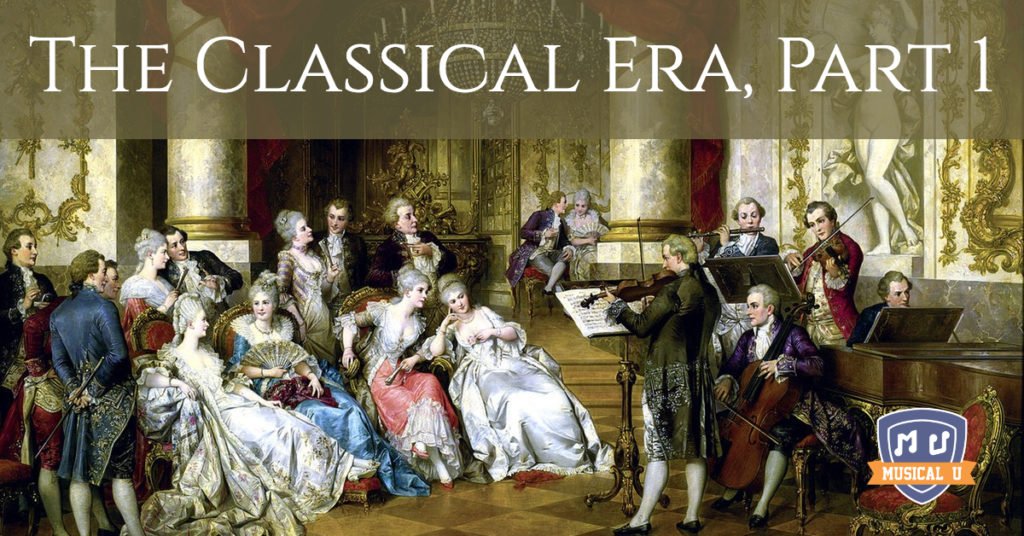 The Western Classical Tradition of music spans an enormous breadth and depth. Thanks to the musical notation system developed in the Middle Ages and perfected in the Renaissance, we have a more-or-less accurate record of this tradition that spans 1000 years. We began our exploration in the Renaissance – when the common practices of rhythm, harmony, and form were crystallized. The extravagant Baroque followed with the first composers to achieve lasting fame: Handel and Bach. We now turn to the era that gives the whole tradition its name: The Classical Era.

The Classical Era in music is generally book-ended to the decades spanning from 1750-1820: some volatile socio-political times as well as intense developments in intellectual and cultural ideology. In Western Europe, the era was one of industrialization, modernization, and urbanization. In the burgeoning cities, the door was opened to public music-making.

Whereas during the preceding Baroque Era, most performances (with the exception of opera) still occurred at court far from the public eye, the Classical Era concert halls were open to the public. 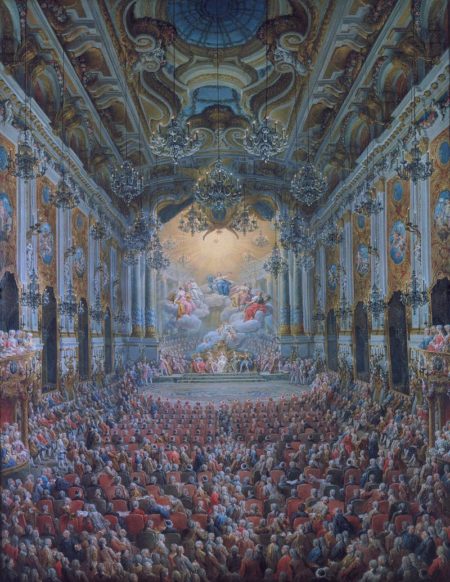 They were dedicated to a variety-show format, where – in a single evening – one might hear two symphonies, sacred choral music, piano solos, and opera arias. This savvy concert-going public craved all new music, all the time, which meant composers had to deliver: intense productivity was the only way to meet demand.

One of the most appealing things about music from the Classical Era is that even inexperienced listeners can trace musical development within these forms, like how a musical theme is presented, fragmented, then re-introduced across a lengthy composition.

The Enlightenment in Music

Everyone, no matter what stature or station, worked under the prevailing Enlightenment philosophy – the intellectual current that underpinned scientific and cultural activities of the age. Basically, enlightenment thinking called for observation, fact-finding, and for exploring the physical world – with the ultimate goal of furnishing logical explanations for any and everything.

That impetus extended to the arts so that composers projected their musical ideas (about form, melody, rhythm, and harmony) with clarity and logical progression- seeking a higher level of communication with audiences.

To achieve that ideal, composers adhered to a set of compositional “norms,” which evolved to become the “classical language” for music of the era. First and foremost was a tuneful, memorable melody, deployed in regular four-measure phrases for balance; these phrases were powered by regular rhythms and distinguished by logical harmonic movement. 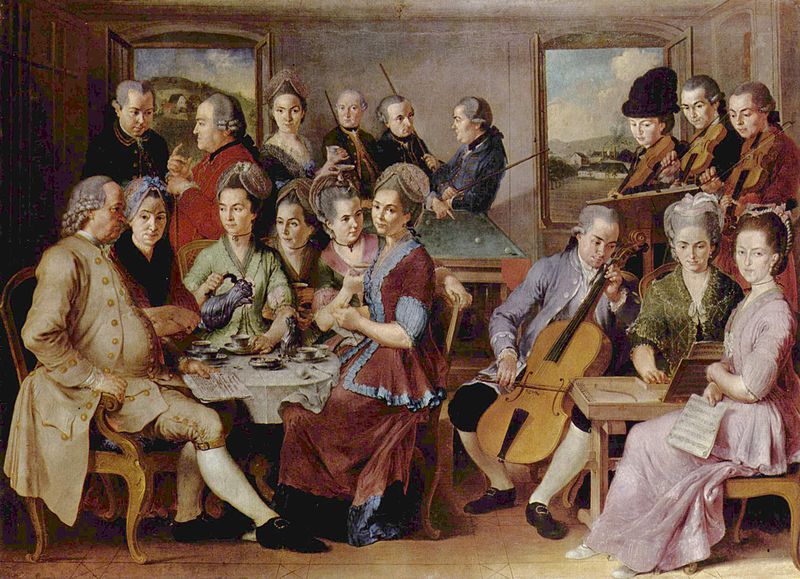 In turn, these melodies were nestled in a set of clear and identifiable forms, including:

Alongside the masters of the era (Haydn, Mozart, and Beethoven) worked a network of less famous composers, churning out multi-movement Classical-era genres:

Instrumental compositions, like symphony and sonata, were crafted in multiple sections, or movements, of contrasting character. In three-movement pieces, you can expect a fast first movement and finale (often marked presto), while the inner movement is often lyrical and leisurely. In four-movement pieces, listeners are treated to the addition of an elegant dance – the minuet – to resonate with social customs of the time.

There is so much to listen to and enjoy in Classical Era music. In Part 1 of this article, we’re going to immerse ourselves in the genres of comic opera and the symphony. 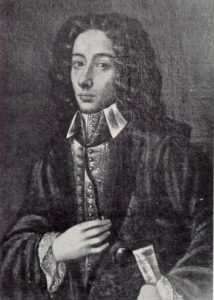 Pergolesi composed the intermezzo – which is essentially a short comic opera – La serva padrona (“The Servant Turned Mistress”) in 1733. Designed to be performed between acts of a more substantial, serious opera, the story reflects Enlightenment social satire – that a person of lowly social stature can rise in the ranks if she exercises her smarts. Here Serpina, a crafty servant girl, is working on nabbing the wealthy man of the house, Uberto, as her husband.

In this solo, or aria, “A Serpina penserete” (“Consider Serpina”), Serpina warns Uberto that he’ll miss her when she’s gone. Pergolesi relied on the norm, a form best designated by the letters ABA (A indicating a repeat of material after a contrasting B section).

The beauty of this three-part or ternary form (used by composers well into the 19th century) is that it creates for composer and listener a foundation for the character to express personal expression and contrasting moods, all within one single dramatic situation.

After an introduction (note a reduced instrumental ensemble that allows the soprano timbre to emerge), Serpina’s melody begins in a major key [0:15], marked by dotted rhythms and subtle, lilting movement to indicate her “sweetness”. At [1:09] comes a tempo change to allegro as Serpina essentially talks to herself in an aside, saying, “I think he’s beginning to warm up.” This passage reveals her cunning nature (“Serpina” does translate to “little snake,” after all). 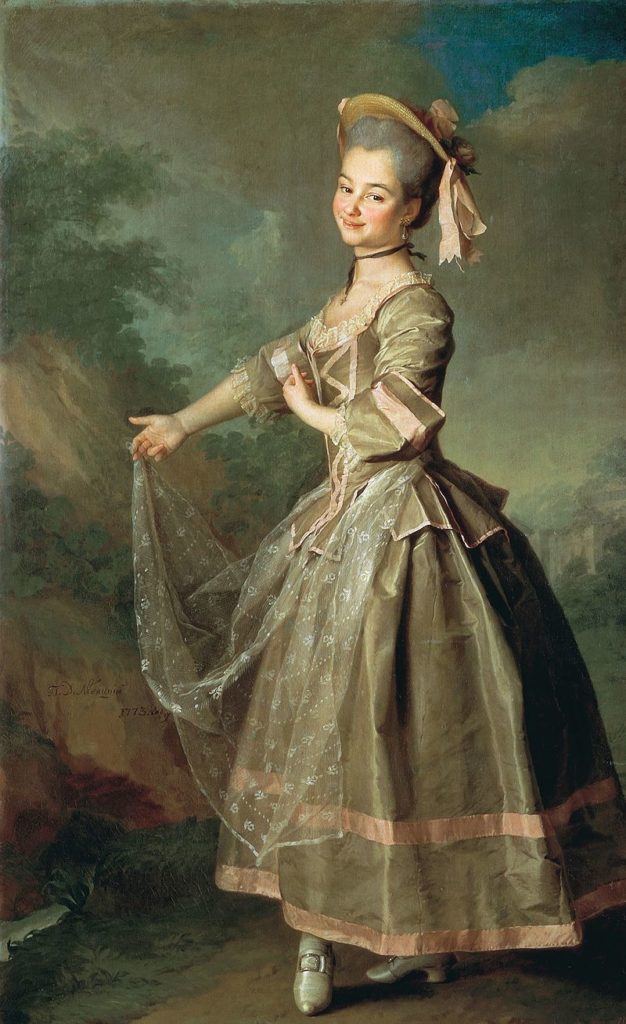 At [1:28] Serpina resorts back to the opening material, once again adagio but in a different key. This is a mark of classicism in music: tuneful melodies are worked and re-worked so that a listener is well oriented to the material and left with a memorable tune.

The middle B section begins at [2:37] after a decelerando starting at [2:32] and ending in a fermata at [2:36], a sustained hold on a cadence that creates a useful dramatic pause. The B section is a contrast, noted by a key change (from a sunnier major to darker minor harmonies) and melodic phrases that descend to represent Serpina’s supposed “embarrassment” at being so forward with her boss. She also works in her lower range to characterize an attempt to convince Uberto that she is sincere—and not just working self-serving motives.

At [3:13] Serpina once again resorts to a quicker tempo and lighter declamation for the aside, assuring the audience that he is indeed coming around.

Rounding out the Form

At [3:27] you’ll no doubt recognize the official repeat of the opening material; this represents the second A of the ABA form.  This arch form crafts a satisfying resolution to the narrative and is a handy musical device for better characterizing Serpina – and her resolute purpose in getting just what she wants. 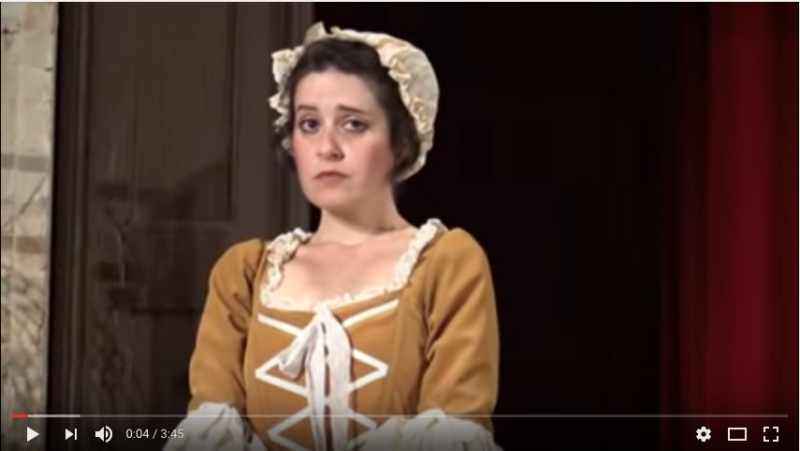 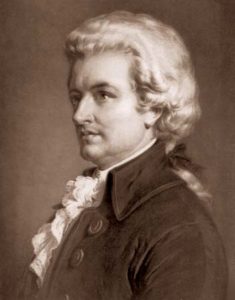 Mozart’s Symphony no. 35 in D Major, K. 385 was composed in 1782 and is nicknamed the “Haffner” (for the name of the aristocratic family who commissioned the piece). We will narrow our listening to the third of four movements: the Minuet and Trio.

In this textbook example of a large-scale ternary (three-part) form comes a Minuet (labeled A), then the Trio (B), then a repeat of the Minuet (A). If it rings familiar, remember: Classical-era composers relied on closed forms that very clearly resolve all melodic and harmonic tension.

Notice that this third movement, in three-part form, is in triple meter as well.

The trick here is that each section (Minuet and Trio) is further subdivided into two sections which repeat, so that inside the broader three-part form are two separate two-part forms in action. It’s an exercise in symmetry, proportion, and balance!

With a brisk tempo and triple meter, the Minuet stands in subtle contrast to the leisurely andante of the preceding second movement, but the contrasts don’t end there. In a boisterous but elegant dance feel (imagine groups couples arranged in regular formations, coordinated by emphasizing the first of three pulses in the pattern), Mozart displays his eclectic style via shifts in melodic material and phrasing, in instrumentation and dynamics. 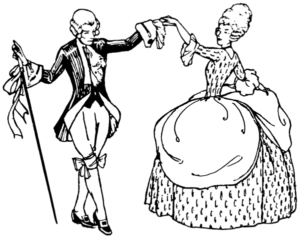 Focus on the ascending scalar (and arguably heroic) phrase from the brass section that sounds in sharp relief to what follows. Though not the main melodic material, those punctuations set up (via a major triad arpeggio) the strings’ melodic flourishes at [0:10], defined instead by descending, dotted lyricism. All of this is underpinned by a steady and conspicuous timpani drum. At [0:15], this whole sequence repeats.

The Minuet’s second section starts at [0:25]: listen attentively from [0:30] to [1:03] to get a snapshot of Mozart’s delicate use of volume changes, as the material shifts from forte to piano. At [0:44] comes a full repeat of this section, so that a listener gets a second chance at relating to it melodically, structurally, and dramatically.

Texture and the Trio

The Trio is the B section of the over-arching ABA that is a Minuet and Trio. It starts at [1:05] and it, too, is subdivided into two sections that repeat; the opening material recurs at [1:15], then the Trio’s second section begins at [1:25]. Note how from there to [1:39], the winds hold supporting sustained pitches (the oboe offers its characteristic nasal sound up top), while the main melodic movement is prominent in the strings. This second section is rounded out by a return to the Trio’s opening idea, after a sustained fermata at [1:39-1:43] to impart separation and grab listeners’ attention.

The brass timbres are entirely absent from the Trio section, which means Mozart simply adhered to Classical-era norms of utilizing lighter scoring here. Also notable in the Trio are numerous sforzando markings: this directive means players impart a stronger articulation or sort of “attack,” then quickly die away. For an example, focus on the string parts at [1:27] and again at [1:54].

Ultimately, Mozart, as an opera composer, was sensitive to how something simple, like articulation or volume contrast, could draw a narrative in listeners’ mind.

At [2:24], the fuller textured Minuet charges back (this is the recurrence of the A section). For this final statement, it’s normal performance practice for conductors to ignore repeat signs and just drive straight through the two parts to complete the movement.  There is built-in symmetry that lends further credence to a prevailing Classical-era norm of proportion, where repetition is countered by contrast, but everything comes full circle to lend closure by returning to where everything began.

These two pieces – one an opera aria and one a symphony movement – represent two sides to the magical symmetry of threes prevalent in much Classical Era music. Within these tuneful forms, composers experimented with an emotional range and flexibility way beyond the Baroque Era’s intense concentration on single emotional states.

Some of this range was inspired by the popularity of comic opera. That’s why Pergolesi, the composer of La serva padrona, holds an important place in music history.

Yet his fame was eclipsed by far by the Classical Era’s big three: Haydn, Mozart, and Beethoven. Next time we’ll explore the music of Haydn and Beethoven, along with the sophisticated elaboration of ternary form known as sonata form, and the delightful rondo form, pulled from the folk music of the day. In the meantime, listen again to “A Serpina penserete” and Mozart’s Minuet. Or listen around to some other Classical Era music and listen for the three-part forms.