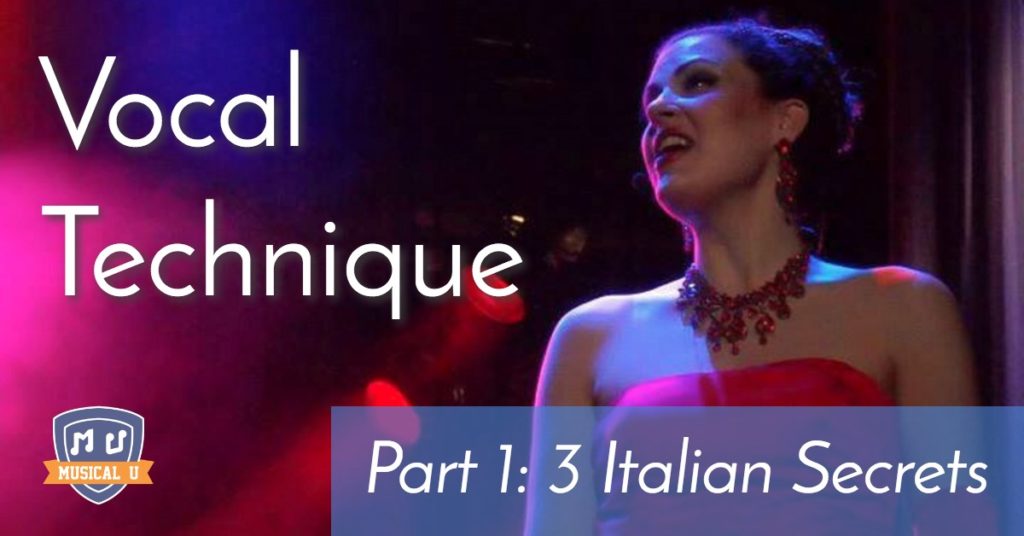 There’s a saying in Italy about singing that goes, “si canta come si parla”, or “one sings as one speaks”. Could it be that singing really is that easy? While the art of singing is more involved and difficult than just pitched speaking, the foundation for good, healthy vocal technique is relatively simple. Yet so many singers are never taught what constitutes the basis of good singing and are therefore unprepared to compete on the world stage and, worse, ruin their voices at a young age.

Although I was trained to be an opera singer, a good vocal education based on classical techniques serves as the foundation for all styles of singing, whether it be opera, musical theater, jazz or pop. Once you learn to support your voice and get out of its way, you will find that you can control your voice to do whatever you want it to do, in any style. Furthermore, this basic foundation of singing serves to keep your voice healthy throughout your lifetime

So what is the basic foundation for good singing? In this series of articles, I am going to explain what I refer to as the Traditional Italian Method of Singing, which is based firmly in knowing how to breathe and support the voice, and how it applies to the discipline of opera—and beyond.

When I was 25, I had the opportunity to audition for a major opera house in Berlin. After a less than stellar audition, I was taken aside by an opera house employee and berated. According to him I sang out of tune, my voice was small and I sang everything in the nose.

Unfortunately, that man was right. The truth was that in spite of all my North American university and conservatory training and success, I simply had no idea how to sing correctly and was completely unprepared for a career in opera.

I started watching videos of opera singers from the mid-twentieth century “Golden Age of Opera.” I noticed that all of the singers looked “sturdy” and I decided to find someone who could teach me to sing like them. I set out to Italy to learn this “old school” method of singing and studied with a tenor in Florence who himself had been trained by the great Italian tenor, Franco Corelli (1921-2003).

Corelli sang with what is known as bel canto, which is (loosely translated) “a lyrical style of operatic singing using a full rich broad tone and smooth phrasing.” However, I prefer to call the method of singing I learned in Italy the Traditional Italian Method of Singing because the umbrella of bel canto incorporates so many incorrect techniques these days that the term has a misleading connotation. The technique I was taught to sing is simple yet has very specific elements.

The Three Basic Components of Singing

The three most important components of singing are:

1. Breathing: You Are Already Good at Breathing

What are you doing right now? You’re breathing. In fact, you’re really good at it—otherwise, you wouldn’t be reading this right now. In spite of the fact that we are all breathing pros, most voice students have no idea how to breathe properly.

Your voice works like a wind instrument. You have vocal folds which vibrate when you pass air through them, making a sound. Without the proper control of the air through the vocal chords, they become fatigued which over time leads to vocal damage.

I’m not a big proponent of thinking too much about the physiology and anatomy of singing, but there are a few things you need to know about how your vocal apparatus works. Vocal production is intimately tied to the respiratory system: 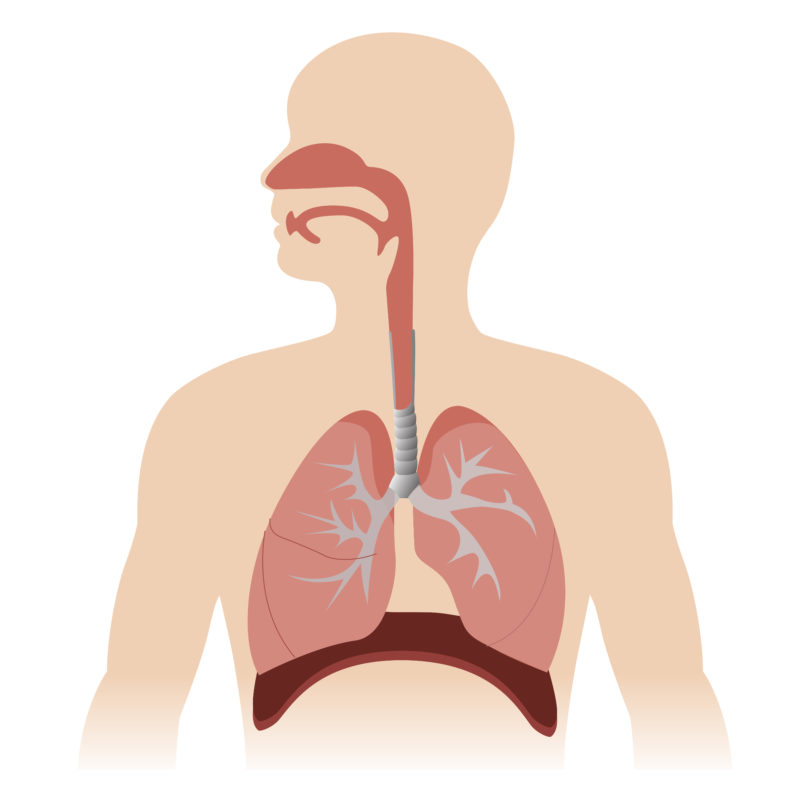 Many singers are taught to breathe into their lower back. According to this diagram, where are your lungs? Where aren’t your lungs? The way I was taught, breathing into your lower back creates unnecessary tension.

The best way to breathe is to take an easy, slow, deep, natural breath much like the ones you are taking right now—not too shallow, without tension and preferably through the nose. (Breathing through the mouth is acceptable, too, although it’s more drying). You will usually have all the time in the world to breathe. Even if it’s half a measure, that’s a lot of time to take in a good breath.

You know how when you are stressed out you take slow, deep breaths to calm your nerves? Getting used to breathing this way and approaching the song phrase by phrase is also a great way to combat stage fright. Yes, there will be times when you will need to take a quick, shallow breath [4:49 onwards]:

But for the most part, breathing is easy and should not be overthought. If you can hear yourself taking a breath, that’s tension.

Examples of how not to breathe are: lying on your back, using a timer, forcing out the lower back, thinking in terms of  “innie or outie” or by imagining tiny men in tiny white suits with white silk gloves holding up your lungs.

One of my favorite examples of how to take time to breathe is from Slovak soprano Lucia Popp singing Pamina’s aria “Ach, ich fühl’s” from “Die Zauberflöte” (English: The Magic Flute, W.A Mozart, 1791). Notice how after she stops speaking at [0:45] she has two “pulses” to take a good breath before starting the phrase:

How do you keep supporting the flow of air so that the sound doesn’t collapse? In Italian, this referred to as “appoggio” which comes from the verb “appoggiarsi”, meaning “to lean against”. In singing, you “lean against’ your diaphragm muscle, which is responsible for the inflation of your lungs. The diaphragm is “a dome-shaped, muscular partition separating the thorax (the part of the body between the neck and the abdomen) from the abdomen.” 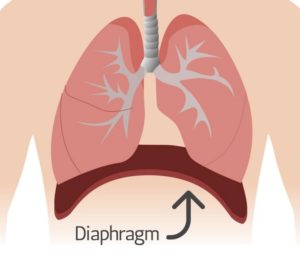 When you take a breath, the diaphragm extends down in and slightly pushes your sides out. If you want to feel your diaphragm at work, stand up, put your hands firmly on your waist and cough. Did you feel that muscle push your hands out? That’s your diaphragm—the mechanism that makes you singing sturdy. Again, with your hands on your hips, try saying the word “Pa!” loudly and with some authority. Did you hear that? That’s the power of your vocal engine projecting your voice and what allows you to sing over an orchestra for three hours without damaging it.

Ideally, when you sing a phrase, the diaphragm remains extended and continues to push your sides slightly out without collapsing. Vocalizing with your hands on your hips while you are learning to use this muscle helps you to feel it working. Without the proper use of your diaphragm, your voice is not supported. Your diaphragm should take on all the heavy lifting of singing instead of erroneously allotting the responsibility for volume and power to your vocal chords. If your diaphragm is not tired when you sing, you’re not doing it right.

Have a look at Italian Baritone Ettore Bastianini sing the aria “Urla fatale” from “La Forza del Destino” ( by Giuseppe Verdi, 1862) recorded in 1958 in Naples.

Watch his abdomen. He breathes naturally without force or tension, yet his diaphragm stays engaged throughout the entirety of each phrase and doesn’t collapse.

Resonance is “the quality in a sound of being deep, full, and reverberating” and awareness of resonance is simply getting to know where the voice resonates naturally throughout the range of your voice.

Sending the Sound In

Your entire body is a resonating chamber much like an acoustic guitar. If you imagine someone playing a guitar and think about how it makes sound, you know that the strings vibrate when strummed and the guitar’s hollow body with its hard surfaces act as an amplifier.

Your body—i.e. your instrument—behaves in much the same way. Your resonating chambers—your cartilage, teeth, nasal cavities, and bones—are all over your body. 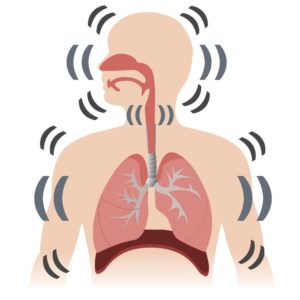 Would a guitarist aim to send the sound away from the body of the guitar? No, because the sound would not be amplified. Likewise, if you think about sending your sound out, rather than bringing it in, you cut off amplifiers that are at your disposal to make your voice project. Your voice does not resonate in the audience. It resonates in your body which in turn amplifies your sound.

It’s very tempting to force the voice to resonate in ways that are unnatural. An obvious example would be singers that “belt”, which is when a singer loudly sings in their chest register above its natural breaking point. Belting is healthy providing that the voice is supported or you are not trying to carry chest tones into a part of the voice that doesn’t naturally resonate there. This will cause serious vocal damage over time as it strains the voice beyond its capabilities.

Though designed to keep singers from overusing chest tones in an unprotected way and therefore causing vocal damage, carrying head tones too low into the chest is an equally unhealthy extreme. How will you be heard over an orchestra if you are deliberately muting the big chest resonators in your lower register? You’ve cut off half your voice by doing this.

Head and Chest Voice? What’s that?

Many singers worry about chest voice vs. head voice and crossing the breaks in their register, however it can be very confusing and limiting to think in terms of “head” and “chest” tones because there is no such thing as “head” and “chest” when you are trying to make one clear, seamless line of sound throughout your registers—only awareness of resonance.

The common term “mix” is overused and misunderstood, but if you learn to understand where your voice resonates naturally, you begin to understand how many “head” and “chest” tones are naturally in the “mix”. The more you become aware of where the voice resonates on any given note of the scale, the more you will be able to control the resonance to suit what you are singing.

The great Italian Soprano Antonietta Stella didn’t shy away from chest resonance. Here she is singing “La mamma morta” from “Andrea Chénier ” (by Umberto Giordano, 1896). Listen to how she uses chest tones at [3:51] and again at [4:30] to end this gut-wrenching aria on a strong note.

Breathing, breathing, and resonance. These three foundations for good vocal health are quite simple if you allow your voice to do what it likes to do naturally. However, even though the basics of singing can be easily understood when taught correctly, if professional singing really were that easy everyone would be an opera singer with little effort.

The hard part of singing is learning how to make room for your own instrument to work properly—not every part of your body is going to be cooperative in allowing the sound to come out! In the next installment I will discuss how to make space for your voice and to get out of your own way.