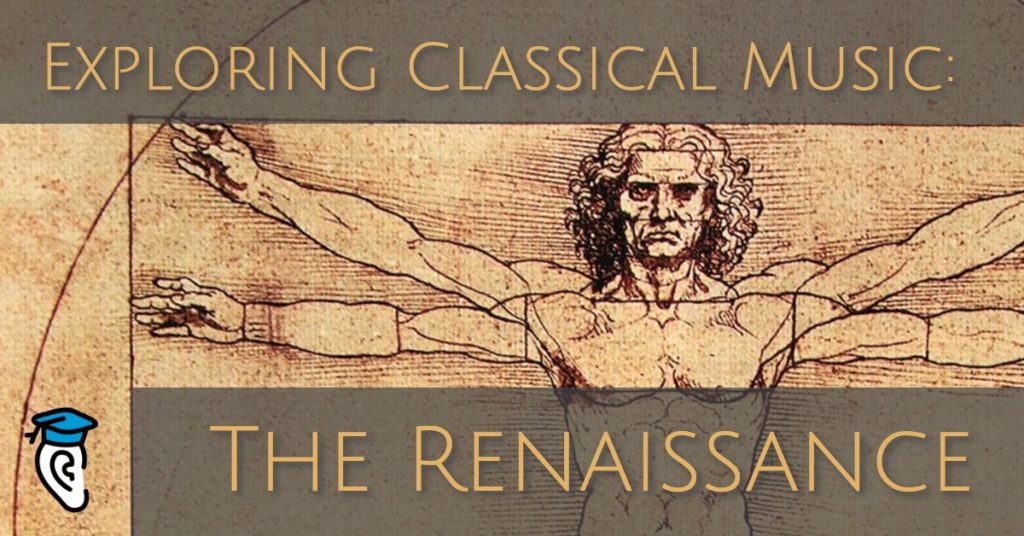 Classical music. Such a dizzying universe of almost supernatural musical expression! How do you start to comprehend more than 600 years of enduring music production? While, as today, music has developed through continuous transformation reflecting the restless evolution of the human mind, certain trends have defined the music production in various eras. Music historians have divided these into style periods: Renaissance, Baroque, Classical, Romantic, and 20th century and beyond.

The Renaissance era in music is marked by a start date of 1450, and scholars agree that it fizzled by 1600 when the baroque forms and style took its place.

Renaissance-era music is diverse, but commonalities can be tracked across regions and decades, due mainly to cultural exchange among artists living and working on the European continent and those in England.

Some traits of Renaissance music developed in reaction to philosophical and social trends of the time. Humanism was a potent force and brought fresh focus on the individual and belief in that individual’s power to shape his or her destiny.

One visual manifestation of humanism is Michelangelo’s David (1501): all of that perfectly sculpted anatomy represents a humanist mindset! In music, humanism manifests more subtly: composers were concerned about music being pleasant to the ear—so they created more consonant sounds—and that poetic texts were “translated” by musical means.  Vocal genres like mass, motet, and madrigal are ideal vehicles to trace these efforts. Two of these (mass and motet) were actually born in the Middle Ages, but new social realities and evolving philosophies meant distinct changes to the forms.

In keeping with humanism, the human voice was the supreme instrument, and musical instruments were rated on their voice-like qualities. Accordingly, while instruments were popular, compared to vocal music little survives in notated form.

In terms of texture, which refers to how musical lines work together, polyphony reigns: composers wove four to six independent parts into a tapestry of melodic and harmonic sound. In a single piece, vocal lines at times move together in lock-step (i.e. homorhythm) and then the texture will fragment as parts start and stop at different times, mimicking one another. This overlapping is labeled imitation, and the effect is a seamless wash of sound.

While functional harmony is not yet the norm, listeners will note triadic sounds, where pleasant thirds, fifths, and sixths emerge from the interaction among voice parts. Composers are intent on maintaining a high level of consonance, but when it came to text painting, or translating the poetry via music, chromaticism proved useful for expression. Josquin des Prez (1440-1521) was wildly famous and scholars see evidence of him working as a singer/composer in various places, including France and Italy. He was mobile, which means different regional traits present in his music, since he naturally adapted and adopted traits from places he visited.

Josquin’s hallmark was imitation: listen to the opening of Ave maria and follow how one voice begins, then another [at 0:07] mimics. The third enters at [0:11] and a fourth voice at [0:15], each in turn with that same melody. A similar example of imitation emerges at [2:50]. The overlap creates an equality of parts and a full texture that transports the listener.

Ultimately, mid-Renaissance vocal music is serene and austere. At times, though, Josquin thins things out to achieve contrast. Hear a reduction in voices from four to two at [1:20]: voice pairing grabs the ear and indicates an emphasis on certain words. The return to a homorhythmic and fuller four-voice texture at [1:43] is Josquin’s trick for ensuring text clarity, as he relies on each voice to declaim the same syllable—at the same time at [4:00].

The refined techniques of Giovanni Pierluigi de Palestrina (1525-94) define the late Renaissance, which means conjunct melodies and a careful control of dissonance (where any clashing sound is approached by step and resolved to a more consonant, sound).  Palestrina also avoided abrupt tempo changes and repeated notes, all to prioritize the text and to avoid overwhelming words with musical matter.

Palestrina composed many Catholic masses, setting the Ordinary prayers to music over 100 times.  Ordinary prayers are recited at every service, no matter what day of the church year. Palestrina worked at the Vatican during the Church’s Counter-Reformation, complying with authorities’ urge to make texts clear and to write music that moved people to spiritual contemplation.

Words like “moderation” come to mind when listening to Palestrina and other late Renaissance composers. His works are also concise, which contributes to their sacred function: compact pieces help a listener maintain focus and preserves the composition’s function: praise and worship.

The “Gloria” is one movement from Palestrina’s “Pope Marcellus Mass”. Compare it to the Josquin motet, noting that Palestrina wrote for six voice parts and that a soloist sings the first line then the choir responds. Palestrina also relied on texture contrasts for interest: at [0:33], there is a reduction from six to three voices, but by [0:42], five are active, which results in louder dynamics. At [1:24] come all six voice parts and the effect is stupendous! Palestrina obviously wanted to emphasize the phrase “Domine Fili unigenite” (“only begotten Son”) in that moment.

Palestrina’s text setting is categorized as syllabic, where each syllable is matched to a single note, but the “Amen” structure that closes the “Gloria” is melismatic, where syllables are drawn out across many musical notes in melodic sequence. Listen at [5:06] and get lost in the celebratory feel that matches perfectly the final word of this joyful prayer.

The madrigal is vocal polyphony meant for emerging semi-professional ensembles of the era, which featured one singer to a part. The genre reflects a secularization of society and culture, which aligned with humanist philosophies. Of utmost concern to composers was managing musical devices (melody, rhythm, harmony) toward translating texts; this resulted in a fascinating merger between words and music.

Many native Italians composed madrigals in the 1500s, and stand-out names are Arcadelt, Marenzio, and Monteverdi. There was also an amazing internationalism ongoing, meaning Italian trends all over Europe. A book of translated Italian madrigals sparked a rage for the form in England. Indeed, some consider these Renaissance madrigals to be the finest examples of English music ever written. Thomas Weelkes is one representative composer. Listen to “As Vesta Was from Latmos Hill Descending” and note from the start the obvious text painting: hear a downward scalar motion on “descending” from [0:09-0:16], then for “ascending,” which various parts repeat between [0:20-0:35], Weelkes cleverly inserts running scales that move upward in pitch.

To indicate that Vesta was accompanied by “all” on this adventure, Weelkes makes certain that the full complement of six voices sound together in lock-step for full, homorhythmic effect right at [0:40]. The change in texture and louder dynamics get listeners’ attention!

That chordal texture gives way to more clear text painting as each singer seems to scamper down the scale to bring to life “came running down” from [1:01] through [1:19]. Weelkes’ text painting is particularly prominent at [1:20-26] where he uses texture contrasts to mark the words “first two by two, (two voices) then three by three (three voices)”. When the poem indicates the goddess was left “all alone,” Weelkes reduced to a solitary soprano at [1:36-1:39]

The international musical language of the time was heard in England, so some traits common to sacred motets and masses are obvious too. Note some imitation at [0:56-1:00] on “from whom Diana’s darlings,” but note also that Weelkes seems overall more open to clashing dissonance. The secular market did encourage more creative freedoms in using rhythms and dissonance to expressive ends.

While the origins of what we now call “Classical Music” can be traced back to the Middle Ages, the many-voiced vocal music of the Renaissance coalesced the understandings of harmony—including the seeds of chromaticism—and of rhythmic development that became the foundations for all the western musical expressions to follow.

Today’s artists are bringing this half-millennium old music back to life—and it sounds as fresh as the day it was born. Relax and enjoy a window into the musical treasures of this era. You may even find something of yourself in the delightful shaping of many voices into one unified expression.