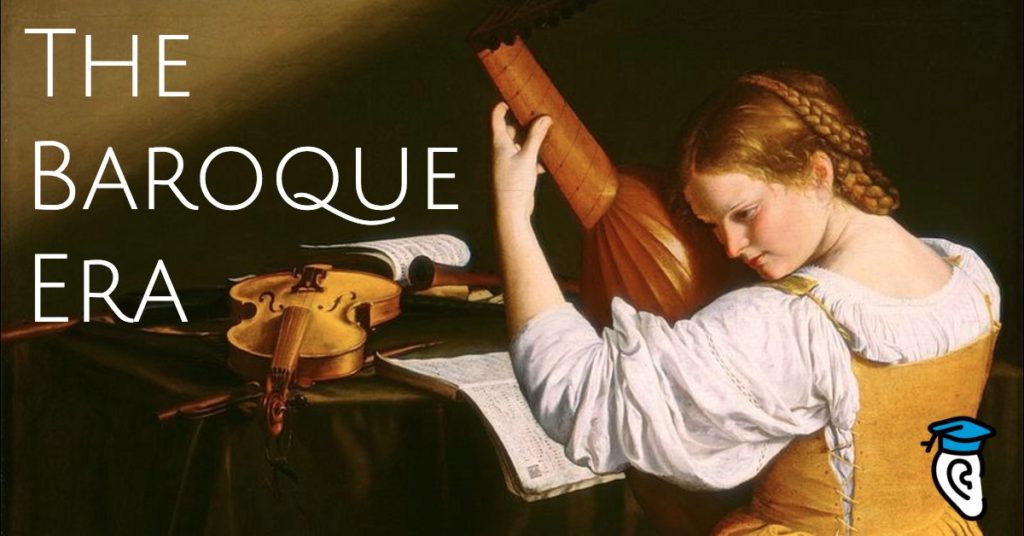 We began our exploration of classical music in the Renaissance, when all the characteristics that became classical music came together. Now we turn to the magnificent Baroque: the era of Handel and Bach. The Baroque Era in music history spanned from 1600 to 1750. That century and a half aligned with a time of scientific and intellectual momentum in what was considered the Age of Reason.

Descartes talked about understanding the material world in terms of mathematics, while Newton explained the laws of gravity. Composers and music theorists would respond with their own urge toward innovation and clarity, and the invention and development of new genres stand as monuments to this new attitude. Frederick the Great Playing the Flute

The Baroque Era was also an age of political absolutism: rulers ruled, at least in their minds, because of a divine right to do so. Why does this matter to music? Because it was inside that aristocratic context, specifically in courts and palaces, that baroque-era music was made, flourishing there to match the desires of royal patrons. With that aristocratic power came a reduction in the Church’s power, so more secular music naturally streamed forth, cultivated in new settings—for specific listeners.

In the Renaissance which preceded the Baroque, vocal music ruled and instrumental music was subservient. But in the Baroque, independent instrumental genres emerged to compete with vocal forms. These new options were introduced, codified, then standardized for the future. The concerto, sonata, and symphony emerge in the 1600s, only to evolve across generations of effort and end up in the hands of later masters like Mozart, Beethoven, and Mahler.

Other baroque-era genres include the suite, cantata, and oratorio. But he era’s most significant musical innovation for the western world was opera. This multi-media extravaganza was conceived and brought to life by critically thinking artists and philosophers who collaborated toward finding manageable ways to sing a story. Even with all of its diversity, the Baroque Era offers common ground across genres and decades. Melodies are typically “spun out” instead of being broken into phrases. Compositions were built from clearly defined sections (or movements), marked by contrasting tempos and textures. You may notice extremes in terms of volume (dynamics) and rhythm. The motoric beat pattern typical of up-tempo instrumental music contrasts sharply with the flexible meter required of emotional opera lyrics.

Homophonic texture was vital for opera experiments, where a single melodic line operated over unobtrusive instrumental accompaniment, setting the words in sharp relief for narrative clarity. Polyphony, which was the hallmark of Renaissance music, did not die away. Eventually, composers like J. S. Bach elevated polyphony to new heights with the complex and imitative fugue.

Keep in mind that contrast is one critical platform for listening in this age, and know that composers used all sorts of methods to create it: they pitted voices against instruments, switched between polyphonic to homophonic textures, and implemented broad tempo and dynamic changes.

The people of the Baroque believed intensely in the expressive power of music. Ultimately, composers were intent on contrasting different moods for maximum emotional impact. Claudio Monteverdi (1567-1643) penned the first masterwork of western opera history. His Orfeo was first staged in 1607, when opera was still a private affair for intimate audiences. One of the most enduring numbers from this opera is “Tu se morta” (You are dead): here Orfeo has just learned that his love, Euridice, has died, and he pledges to retrieve her from the abyss, then restore her to the land of the living.

Monteverdi used recitative here, a type of operatic singing that calls for a speech-like (versus song-like) delivery and sparse orchestral accompaniment: simple, dry strings and broken chords punctuate poetic phrases in the voice, especially at very start and toward the end, notably at [1:38-1:50]. This special balance ensured that the words were unencumbered, so that the intense, emotional text is prioritized.

Even with deliberately limited musical resources (remember this was for an at-home performance), Monteverdi uses certain melodic, harmonic, and rhythmic elements to his dramatic advantage. Read the text translation, then think carefully about how the music translates that text. On the poignant word “morta” (dead) [at 0:11 and at 0:19], Monteverdi installed a clashing dissonance. More rich chromaticism and a descending melody at [0:55-1:02] narrates Orfeo’s commitment to “descend to the most profound abyss” for the sake of love.

Tempo changes sustain the dramatic narrative, and Orfeo’s more impassioned rhetoric—from [0:36] to [0:50]—brings a quicker pace for urgency. Note a rather free vocal style overall, which matches poetic rhythm and conveys the emotional pathos inherent in the new dramatic genre:

Arcangelo Corelli (1563-1713) formulated new standards for large-scale instrumental genres like sonata and concerto. His Trio Sonata in D Major, Op. 3, no. 2, is one of his many masterpieces.  Scored for an ensemble of four players, you’ll hear two violins accompanied by harpsichord and viola da gamba (a sort of a compact ancestral version of the cello). This duo of accompanists is known as the basso continuo and reliance on it marks baroque-era music across many genres and decades. This sonata is in four movements distinguished by contrasting tempos: Slow-Fast-Slow-Fast. Note how in the opening slow movement Corelli exploited the inherent polarity between melody and accompaniment: violins clearly carry the main tune to define a homophonic texture.

At [0:40-0:55] comes a fine example of contrary motion, where the violins’ melodic phrasing trends upward and the bass line instead descends. Hear, too, how the violins transfer identical material up in pitch, basically repeating the same phrases but higher in register. This technique is known as sequence, and functioned as one simple way composers of the time could expand melodic material without having to develop motifs.

The second movement starts at [2:10] and features a contrapuntal texture. The strings chase each other in imitation, with the second violin coming in at [2:14]. Note how the viola da gamba takes a notably more melodic, rather than harmonic, role (true of both the first and third movements), joining the fun at [2:19]. Remember that Corelli chased that baroque urge for contrast, so the fresh texture and the acceleration satisfy that.

Enter the third movement at [3:32], with the expected leisurely pace. The fourth movement  at [5:32] is again faster and more contrapuntal—are you getting the pattern? This finale is in a binary form and you can easily hear the players honor repeat signs in the score: we get a literal repeat of the material starting at [6:00]. This contributes to overall structural logic and demonstrates a composer who is concerned with a rationally structured, large-scale form.

Watch the video for useful performance practice cues! There is no separate conductor: instead, the harpsichordist coordinates players at the start, then eye contact is sufficient for this small chamber ensemble:

In the violin concerto linked here, listeners take in one of the most prolific and masterful of all composers: Antonio Vivaldi (1678-1741). His “Opus 3, No. 6”  is in a moody A minor. Like the other baroque-era pieces, there exists an emphasis on contrast. Note the emerging dialogue between soloist and orchestra (or “tutti,” which means “all”) and that contrasting tempo distinctions mark each of three movements total: Fast-Slow-Fast (standard form for a high baroque concerto).

Vivaldi used ritornello form for the first and third movements, borrowing from the vocal refrain form. “Ritornello” means “return,” and indeed the tutti passage that opens the piece ([0:00-0:30]) recurs time and again. That repetition makes for a cohesive listening experience and frames even more contrast: in between the group statements come soloist episodes—the first of which enters at [0:30]. These passages either somewhat mimic the ritornello or prove completely unrelated, and they serve two purposes:

Vivaldi knew the violin well—its capabilities, range, and colors—so he wrote idiomatically for it. Hear the demanding solo playing from [2:24] to [3:00], and again in the third movement from [6:37] to [6:57]. Here dynamics changes add depth and emotion to the listening experience.

In order to internalize the sectional nature of baroque forms, commit to listening to the entire concerto. Hearing the whole concerto together brings to light the contrast between one movement and another. For example, listen at [3:18] for a reduced texture for the second movement, which lets the melancholy melody soar over the basso continuo accompaniment.

While they were created in an aristocratic context, many baroque pieces, such as Handel’s “Messiah,” became popular and have been performed continually from the time they were composed until today. Many composers in subsequent eras studied and drew inspiration from the baroque masters.

In fact, baroque music has never been more popular than it is today. The 20th century gave us a baroque revival, and a quest to recapture the era using baroque tuning systems and performance practices on period instruments. There are even modern musicians that have made their entire careers specializing in this 400-year-old style.

Baroque music has something for everyone. As you listen, take mental notes on what you can draw from it and apply to your own musical expression. Are you into speed metal? Relish the baroque fascination with motoric rhythmic pulse and sudden contrast. Do you sing expressive ballads? Soak in the emotion-drenched slow movements and opera arias. Looking for clear structure to shape your songwriting? Open to the balance and clarity of baroque sonata forms.

Most of all, surrender to the immense power of music, which is as true today as it was 400 years ago.