Home » How To » Collaborating » Choir » A Cappella for Ear Training: How

A Cappella for Ear Training: How 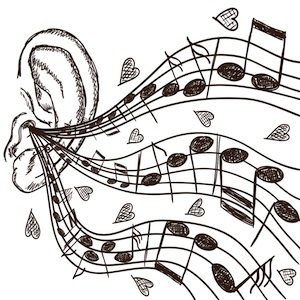 Earlier this week I wrote about the power of a cappella music for developing your musical ear. Today we’ll continue with some suggested ways you can get started in a cappella ear training, with musical examples and tips for making fast progress.

As outlined in the previous post, there are a wide variety of aural skills which can benefit from some focused a cappella listening.

Today we’ll focus on one area in particular: active listening for harmonic awareness.

What does that mean?

Let’s start off by being clear on our goal. That’s step one.

Unlike some aural skills, this isn’t one where there is a ‘right answer’. You won’t be quizzing yourself, and there won’t be study material to read up on. You won’t need any music theory.

While this will all sound very appealing to some music students, there is a downside! It’s much harder to set clear goals and track your progress in training. Which is generally key to making good progress in ear training.

So we need to at least understand what we’re setting out to accomplish. I would define it like this:

I can reliably simultaneously hear the pitch of each voice, throughout the song.

Let’s take that piece by piece:

An ambitious goal – especially as we progress through the difficulty levels below… But one worth aiming for, and certainly one which starts to show its benefits long before you reach perfection!

Personally I found myself loving to practise this aural skills even when my ability was more like “I can sometimes roughly manage to figure out the pitch of two voices simultaneously, rather than switching back and forth”. It’s a kind of mental juggling, and it’s immensely satisfying for the musical brain! 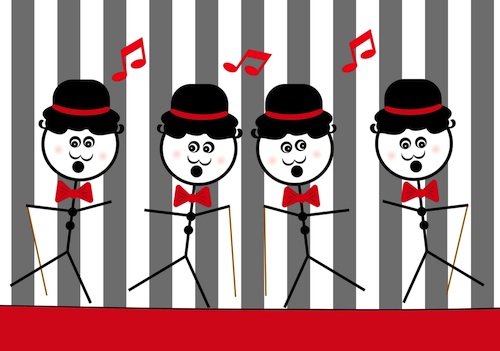 So once we know our destination, we need to figure out what you can already do, and plan a route.

Perhaps it’s because I’m a mathsy guy at heart – but to me, the natural way to approach this skill is by gradually increasing the number of voices you hope to pick apart.

You’ll find that many other factors affect how easily you can hear the harmonies present – for example:

The good news is that these are all things you can vary to help find cases where you can accomplish the feat, as you progress through the difficulties below.

For example, if you’re having trouble with an all-male trio, try a group with 2 female and 1 male part. If you find your ears dazzled by a swift polka, try a lullaby instead. If you love the Andrews Sisters but find the vinyl audio quality just doesn’t cut it… Try the present day Quebe Sisters instead.

You get the idea!

In fact, we’ll do exactly this to make our lives easier: rather than stick to pure (i.e. unaccompanied) a cappella music, I’m going to suggest you consider the broader category of “vocal harmony”, where the focus is on a small group of singers in harmony, but there may be instrumental backing. Sorry to a cappella purists! See how you get on and judge for yourself which is more useful for your training.

Recorded duets tend to feature instrumental accompaniment rather than being true a cappella, but these can also serve as great practice material.

Two male voices
Some of my earliest practice with this skill was trying to appreciate the harmonies in Simon and Garfunkel recordings:


… or something more modern:

Two female voices
How about some Tegan and Sara?

More a cappella duets
Audio quality and performer ability can vary – but YouTube is generally a good place for finding unaccompanied duets.

If you’re having difficulty, you might find some basic interval training (no, not that kind!) will help you train your ear to appreciate two-note harmonies. There are lots of resources on our dedicated intervals topic page, including our best-selling iOS app RelativePitch and free interval practice downloads.

This is where it starts to get really fun. Again, we’re going to blur the lines of “a cappella” to mean “vocal harmony” and allow a bit of background music… Because that lets us practise with the phenomenal Andrews Sisters:

and some nice a cappella covers of their hits, like:

Here’s a track from one of my favourite records, The Quebe Sisters’ “Timeless”:

This album’s a particular treat for harmonic ear training because the sisters switch from singing to playing violin/viola at times, giving you a different kind of 3-part harmony to follow. I also find their complementary voices and the arrangements used make their vocal parts relatively easy to follow.

Or for something a bit different, from the world of true a cappella, here’s Armenian trio Zulal with a slow haunting number, “Sareri Hovin Mernem”:

Once you’re listening for three voices, we’re into chord territory, and you might find some chord ear training will help you discern those voices more easily. Try our Chordelia app or a free downloadable training pack for triad chords.

Considering same-gender groups, the male world is of course dominated by the immense tradition of 4-part male “Barbershop” singing. Deserving of a whole article to itself, but here’s one video to whet your appetite:

(and more)
… Which isn’t to say there aren’t 4-part female groups worthy of extensive listening. The incredible Anonymous 4 spring to mind:

And don’t forget those sixties classics – you could do a lot worse than The Beach Boys, The Four Tops, Frankie Valli and the Four Seasons, The Crystals, The Shangri-Las, The Supremes…..

Many modern a cappella groups will feature five or more singers, like the King’s Singers with 6, or the Swingle Singers’ 7. And of course you have the classic 8-part church harmonies (2 Soprano, 2 Alto, 2 Tenor, 2 Bass).

And whether the number of singers has increased beyond 4 or not, you’ll find some a cappella arrangements just get plain… strange!

As a final example to demonstrate both these points, here’s a King’s Singers track featuring some quite unusual harmonies:

The forthcoming London A Cappella app will really push you to the limit: hearing which of 7 Swingle Singers is singing too loudly! Now that’s a real test of your aural skills and harmonic discernment – and how well you know those Swingle voices…

That should give you plenty to get started with using a cappella music for ear training. I’ll be back tomorrow with some training tips to speed you along – but if you need any help just post a comment below.

Naturally the examples above are somewhat skewed by my own musical tastes. I’d love to hear your own suggestions for practice tracks!

Enjoy your newfound world of a cappella ear training… and look out for the festival app, coming very soon!