Solfa and the Score: Music Transcription 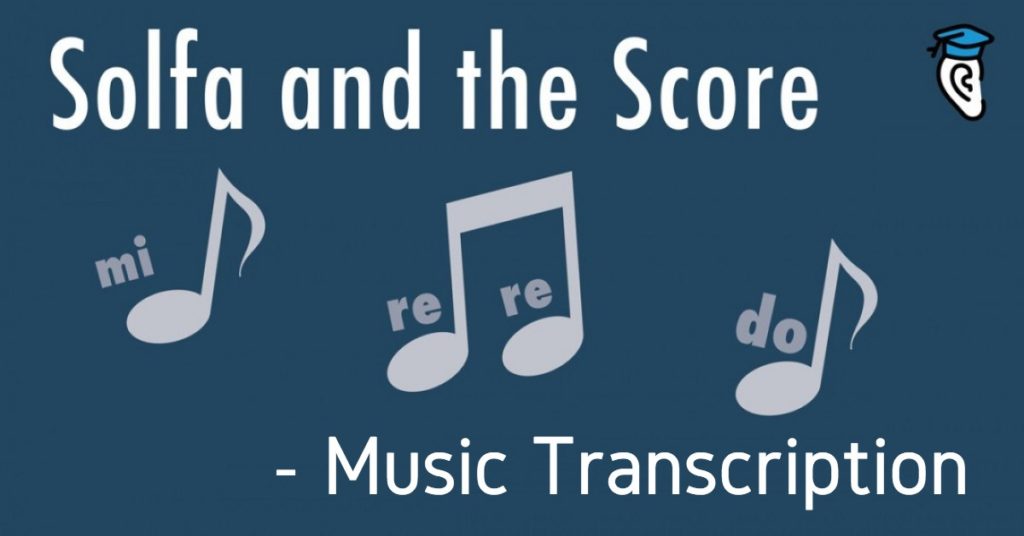 The wonderful thing about developing your relative pitch through solfeggio is that you can use it for a variety of musical activities. Previously we have covered sight singing and pentatonic improvisation. Now we will apply those same pentatonic skills to another important musical task: transcription.

In the last part of this series we introduced pentatonic scales, including how influential they were for the musical development of traditional genres all over the world, even for cultures geographically disconnected and apparently unrelated.

We studied the structure of this five-note scale in its Major form, having as a starting point, Do. Finally, inspired by the “Orff-Method”, we proceeded to practice exciting exercises using the Major (“Do”) pentatonic scale for creative improvisation, using popular modern music as backing track.

Melodic dictation can cause difficulty for musicians but now that you have learned the ability to sing pentatonic scales and associate the solfa syllables with the corresponding pitches of the scale, you will find that the world of transcribing pentatonic melodies is not so troubling.

Ready for this new pentatonic challenge?

The structure for the following exercises is simple, and should provide you with an effective and fun method to learn to recognise the notes of a pentatonic scale when used in a song or instrumental piece.

How to Transcribe Music

Our methodology will be as follows:

In order to focus on the goals of the exercise, all the melodies are written in 4/4 and the key of C major.

You will require concentration to get the right syllables and pitches. These melodies have been composed to provide a lot of fun while encouraging you to enhance your skills to recognize pitches and associate them with the right solfa syllable.

Finally, we will use the same methodology of gradually increasing the number of notes used from the pentatonic scale. That is, we will have exercises for three, four and the full five set of notes from the Do Major Pentatonic Scale. In case you forgot how it looks, here is that scale again:

Before starting with the proper exercises, let’s review an example to be sure to get the procedure right.

Let’s check the steps one by one:

First listen to the melody:

The tempo is 90 BPM and as stated before the time signature is 4/4. The rhythms should be fairly easy for you, but if not please review the Talking Rhythm series.

Sing the melody and memorise it. Don’t worry about the rhythm at this stage.

Now that you’ve learned the melody by memory, assign the correct syllable for each pitch. We are using three notes in this example, so the options are “Do”, “Re” and “Mi”.

Time to transcribe! – now that you are clear which pitches comprise the melody, proceed to write it down. The final result should be something like this:

Easy, right? Let’s start with the real exercises. You can check your answers at the end of this article, with the solfa and the score.

This is a melody comprised by again the three first notes only of the pentatonic scale. Remember: sing first and memorise the melody. Assign the syllables and finally proceed to write. Try listening to the melody just a limited amount of times (a maximum of three times), as it helps train your memory for better transcription skill in future.

The tempo is the same as in the example, 90 BPM. Let’s hear the melody:

The use of sixteenth notes might make it a bit more challenging, but definitely more fun, right? If you succeeded, let’s try four notes now:

Now we’ll include “Sol”, so the options now are in total “Do”, “Re”, “Mi” and “Sol”. The tempo for this exercise is faster, 120 BPM, but there are also repeated patterns that will definitely help you to memorize it easier.

Are you up to the challenge of transcribing the full range of a pentatonic scale? We will have “Do”, “Re”, “Mi”, “Sol” and “La” in two octaves.

Don’t worry! The rhythm pattern here is what is called in popular music a “vamp”, a repeating musical figure. This doesn’t mean you will have to do less effort in getting the notes right though. At 120 BPM playing constantly in eight notes, there will be a good number of pitches to transcribe.

There’s also an added difficulty for this exercise: starting in a different pitch than the tonic.

Let’s hear it then:

And now you will really need this:

This exercise will require all your concentration and the skills developed until now. Follow our defined path to success: Sing, memorise, assign syllables and finally write it down.

Good luck and I hope you had fun transcribing these cool pentatonic melodies! If you keep refining your skills, every time you hear a pentatonic scale you will be able not only to recognise it immediately, but also to transcribe the notes fast and accurately. As with every musical skill, all you need is practice, practice and practice. Have fun practicing your pentatonic transcription!