Home » How To » Audiation » The Secret Music Practice Skill: Audiation 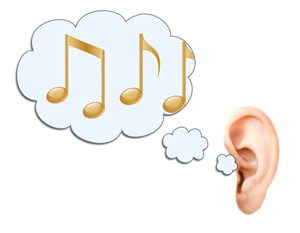 In the 1957 musical The Music Man, a con-artist posing as a music teacher taught his eager students the “think method” for learning music. “Professor” Harold Hill claimed that if you thought your way through a song, you would magically be able to play it.

Thinking your way through music may not be enough to really learn it, but it can be a highly effective tool for accelerating your progress and improving your musical ear.

The Power of Imagination

It has become more and more common for coaches to recommend their athletes visualize their success, imagining that moment of triumph when they win their competition. Some coaches even have players set aside time before big games to visualize succeeding.

The belief is that this focuses a player, gives them confidence, and allows them to practice skills without actually expending the physical energy required by their regular practice routine.

The same idea can be applied to music, and particularly through singing. The process of internalizing music is a very important step toward externalizing music—which is really just an academic way of saying you have to make the music inside your head before it can come out in front of an audience.

This process of audiation can considerably strengthen your skills as a musician.

When I asked my fiance about “audiation”, he told me: you should have a tax professional prepare your taxes to avoid it.

My word processor doesn’t even recognize “audiation” as a word!

So clearly it’s worth spending a moment to explain what audiation is before I try to convince you, good reader, to practice it.

“Audiation” is a term coined in the 1970s by Edwin Gordon to refer to the creation of auditory imagery. It is similar (but not quite the same) as Zoltan Kodály‘s references to “inner hearing.”

To put it another way:

Right now, as you read this, take a moment to think about the song “Twinkle Twinkle, Little Star”.

Don’t hum it or sing it out loud, just think about it.

That process of hearing it in your head is audiation.

If I asked you to audiate a song you had heard only once or twice, you would have a much more difficult time getting a clear “picture” of the song. So you can see that in order to fully audiate, there must first be an extensive knowledge of the song. This requirement is what makes audiation such a great tool for learning music.

There are many useful benefits of audiation, but I’m going to focus on two applications that I use most frequently.

How to use audiation

As a music educator, I use audiation to help students develop their internal sense of pitch. Here’s an example of how it works:

When your singers have become more familiar with this concept, apply audiation to the music you are rehearsing. For example, if the students are having trouble with a specific entrance note, have students stop singing on the note before the troublesome note, think the next note, and then sing it.

Once students are comfortable with that, stop singing a few measures before the note, audiate through the silent measures, and then come in on the troublesome note. This will strengthen the internalization of the pitches.

Examples of audiation in practice

Here’s how it would work with our example song, “My Country ‘Tis of Thee”:

After a steady diet of exercises like the one listed above, you (or your students) will develop a better sense of internal pitch, which makes it a lot easier to find musical patterns, predict where a melody line is leading, and understand key changes. It also builds sight reading skills by strengthening interval recognition.

Use Audiation to Sneak In Extra Practice Time

As any music student will tell you, the more hours spent involved in meaningful practice, the better your skill. But singers are limited more than most instrumentalists in terms of ability to practice for long periods of time. Our instrument is simply not built to be used for hours on end. In the name of vocal health, each person must limit their vocal use to a few hours a day at most.

But the ability to audiate opens up an unparalleled opportunity for practice time!

It should not be substituted for physical practice, of course; muscle memory is an important part of singing. But thinking through your pieces in a very concentrated, detailed manner can be as effective as practicing.

This means the whole world is your practice room! Whenever I find myself stuck at the DMV or taking a long bus ride, I will audiate my way through a piece I am preparing. The next time I hit the practice room, many of the issues I had faced with rhythm, intervals, text underlay, and interpretative expression are simply no longer a problem. 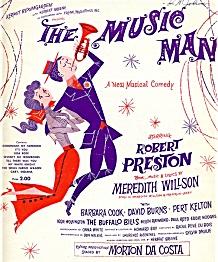 It’s not quite as simple as the “think method” but Professor Harold Hill was not too far from the truth when he said that thinking your way through a song would help you to play it. While it is no magic solution for learning music, it can be shocking how well it works, all while conserving the voice.

So if you’re looking for a way to silently and secretly improve your singing performance, or an effective way to hone your internal sense of relative pitch, look no further than audiation.