Home » How To » Collaborating » Choir » Open Your Ears to Chant Music

Open Your Ears to Chant Music 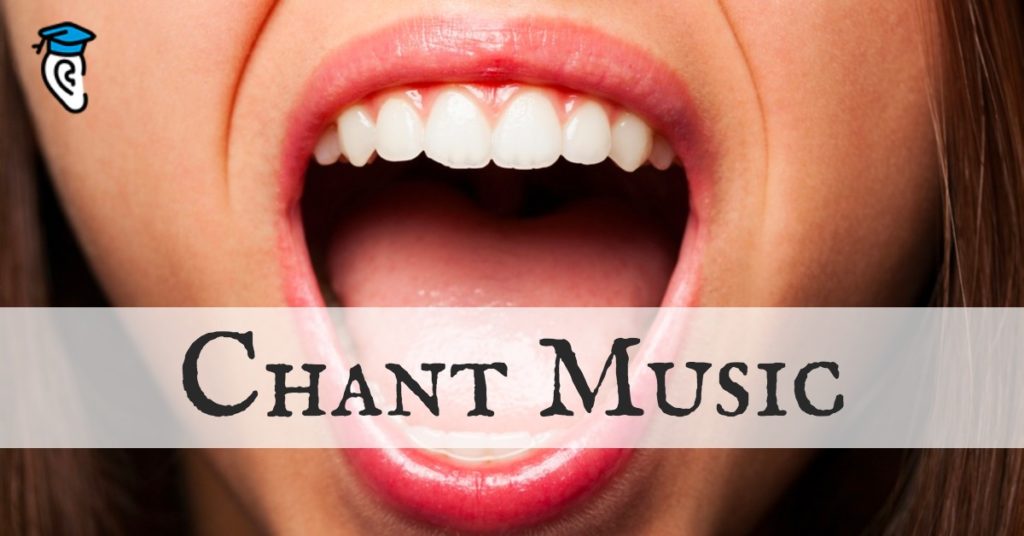 In western and eastern cultures—really across the globe—chant is deemed foundational in terms of musical expression, musical style, and performance practice. It has for centuries served as a way to deliver vital, human messages related to religion and spirituality. Through chant melodies, many liturgies have managed to thrive and perpetuate their teaching across generations. Chant serves to engage and sustain participation in music with its openness, its universality—and arguably its simplicity. Artists have continued to draw on chant’s ethereal beauty and appeal by weaving aspects of its simplicity and grace into all kinds of musical genres, including folk, metal, techno, and even more everyday “pop” musics.

This first track is the closest to traditional religious chant (in the sense of western culture “Gregorian” chant, that is) of the five songs gathered here:

Let’s analyze the melody across several points. First, melodic contour: it presents in an arch shape—ascending then descending for cadences (phrase endings) where that very final melodic motion almost always moves up by one interval step. As for melodic quality, hear how the sequence of intervals (how one pitch moves to the next) is conjunct (stepwise) rather than disjunct (movement by leaps): that’s also typical of functional worship music in its simplicity.

You may notice that you can’t determine whether a major or minor scale is in use. That’s because the pitch collection here is a church mode. Those ancient collections don’t feature the notable push from the 7th into the 8th scale degree; in other words, there’s no leading tone attraction to a tonic and the typical pattern of a major scale, which situates half-steps between the 3rd/4th and 7th/8th scale degrees may sound displaced. Still, a “home pitch” is obvious in the melodic content. Hear how the tune wanders but always returns to a “final” note at phrase endings. This is notable in the concluding “Amen” at [1:20], where you also hear a short melisma as the “Ah” syllable is dragged out across a few pitches.

2. Lord of the Ganas by Bill Pfleging

One of the most notable elements of this piece is the tolling bell that sustains on a single pitch to create an intermittent drone. A low-pitched chant almost immediately emerges over it but remains pretty unobtrusive throughout. Still, try and imagine the song without it!

Hear how declamatory the text delivery is, almost like spoken word, emphasizing text content over vocal lyricism. This deep chant prevails throughout, consistent in a sort of “Japanese Noh theater” way. Then a more active, more casual, and distinctly repetitive solo melody begins at about [0:35], soaring freely almost like a descant up top.

More aggressive guitar strums roll in to accompany while some sort of metallophone (a triangle, maybe?) enforces a “pick-up then down” beat pattern, all helping to build anticipation and drive. Listen close and stay tuned in: this is a sprawling piece that’s built on a single steady foundation, constant and consistent, in simple quadruple meter.

Still, you will sense a gradual shifting here and there (like off-beat percussive strikes and unexpected guitar strums outside its basic pattern), while unexpected micro-tones and other vocal elaborations (like at [3:19]) embellish and subtly alter what is by now a familiar melody.

Take this in layer by layer. Enjoy the build-up, since that’s the structural aim: a sort of accumulation toward a broadly hypnotic effect.

3. I Fight Ganon by I Fight Dragons

So for video game buffs, it’s easy to tell that “I Fight Ganon” is based on the theme for the all-famous, classic game Zelda. The main melody is offered up via a playful (almost careless?) vocalization style made into a boisterous, triumphant chant—a far cry from the serene, mystical sounds of the first song in this set!

Note how the main melody’s ascending melodic contour (moving mostly up in pitch via jagged leaps in interval) plays well into the notion of advancement and to the idea of momentum, which any video game player would aspire to achieve. Polyphony reigns here with all the band members contributing to the vocal harmonies.

It’s an a cappella introduction before the percussion part on a drum set enters at [0:23], with hits and rolls that reinforce what comes to the ears as a militant, duple-meter march. The electric guitar comes to dominate at about [0:55], basically reiterating the main theme, but that “buh-yuh-buh” vocal phrase keeps actively weaving in and out alongside a ramped-up percussive effort. The whole thing comes to a forte (loud) conclusion with all components in play simultaneously.

4. Ride On by Madya Marga

Probably what will strike your ears most immediately in this track is the repetitious vocal solo, with a kind of reverb or echo effect and dry percussive hits that accentuate the song’s quadruple meter. Once this refrain starts, it never stops, acting as an ostinato: a foundation to everything that gradually accumulates over time (and note that looping is the technique powering this effect).

Vocal harmonies layer in at about [1:00], but not with the sonorous, open thirds and fifths of typical triad chords. Instead, you’re treated to some surprising dissonant combinations of pitches. For a specific example, listen carefully to the “ride on, ride on” sequence from [1:01-1:15]. Countermelodies muddy things up via new electronic timbres at [1:16], and then at [1:47] latch on to the words “Oh, I lost it all” which add a fresh narrative punch via a deep, steady, monotone chant—and all of this while that ostinato refrain is maintained.

Coming next is something that’s best described as a “textless moan”: a cool addition that swells over the now-thick texture at [2:02]. The vocals begin to fade at about [3:00] and instrumental color, as well as a more improvisatory style, emerge to take your attention as the “surface” elements.

In all, I think text painting is in play: to “ride on” means to never stop, to keep pace, keep momentum, and the interplay of musical elements here illustrates that all well.

This is a compact piece at only 1:40 long, a far cry from the Bill Pfleging track we discussed above! Listen to the obvious call-and-response form where a leader starts and a group replies, like a conversation. Try to participate in it yourself once you’re familiar with some of the lyrical and melodic content.

Enter polyphony at [0:15] via some pretty tight intervals, woven together across multiple independent chant lines that exist in a meterless rhythmic fabric. The combined vertical sonorities that result would easily resonate across distance thanks to the intense, resonant harmonies—likely important to a folk chant tradition like this, practiced by those who communicate via song in vast, open lands. There is, by the way, a Bosnian Highlander song tradition called ganga that calls for a similar performance practice.

Like me, you might be drawn to the focused, narrow tone of the singers’ vocal style. I’m inclined to contrast it with a warm, vibrato-laden opera singer style. Depending on our musical background and experiences, we’re conditioned to appreciate certain singing styles. These singers’ approach should be one of them! We get diverse, decorative, and emotional wavers on sustained pitches, typically at the end of phrases, all across a rather narrow melodic range (something typical of folk song, as is the conjunct movement from pitch to pitch). Revel in the rich dynamic contrasts across the song’s repetition, causing a listener to lean in a bit to really process the subtleties of the a cappella delivery.

Traditionally “chant” music made us think of Gregorian monks solemnly performing in a chapel—but hopefully the examples above have demonstrated just how varied this form of music can be. Explore more tracks by the artists above and listen out for chant sections in the music you hear each day. You might be surprised where it can be found once your ears are open to it!