Hearing Effects: Listen for that Reverb 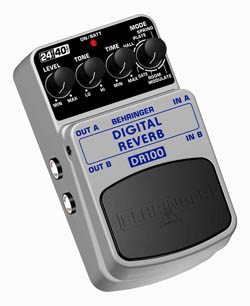 Last time around we were talking ear training for echo effects, all those wonderful ways to make many repeating sounds from one… Now for a slightly different effect (but definitely staying in the same family as echo):

On to reverb we go!

The story here is not much different. It was pretty much the same quest to produce that “spacious ambient” sound so common in halls, caverns, or caves that led this particular sonic safari.

Sure, the mechanics used are different for producing reverb sounds, but the evolution was parallel to the echo/delay story from last time.

You know the song and dance by now. All beginnings are humble, and this was no different.
Instrument amplifiers had springs placed in a “tank” with an electronic transducer feeding a portion of the amp signal to the reverb tank. The vibration and electronic stimulation of the springs caused the reverb we all know as “Spring reverb”. Listen to anything produced from the 1950’s and 60’s and chances are you’ll hear springs doing their thing. Studios on the other hand used larger versions of the same idea. Plate reverbs were and still are also very common in studios.

With plate reverb, usually a giant metal plate was suspended in an anechoic (meaning devoid of any natural echo) chamber, and driven with an electronic transducer – much like its little brother, the spring reverb. Plate reverbs were used on drums and vocals due to their inherent “bright” and slightly metallic sound. Actually, they were used on everything – for a while especially in the ‘70s and early ‘80s you could hear that “plate” on all the harder rock of the day.

In short, reverb, was produced in a mechanical way.

Everything from the natural occurrence between sound source and microphone, to tiled bathrooms, all the way to rooms built just for said purpose (“reverb chambers”) were at one time or another used to create reverb effects – and still are!

Incidentally the first metal pate reverb was introduced by EMT. Expensive? Do you even dare ask?

By the way, many complained about tape echo effects being bulky. Do you know what an average EMT plate reverb weighed? How about 400-700 pounds! You can’t exactly do the “portability” thing with plate ‘verbs. Hence mobile units sticking to springs in the early days. So, naturally, you know what follows…..

Time to electronically replicate the effect!

Again, I’ll spare you the detail of evolution, as it is quite similar to what delays went through and we learned all about that last time. If you’d like to dig in more, here are a couple of good articles on the subject:

What about the sound? Reverb is made up of a few fundamental sound characteristics, core to any reverb effect. Let’s have a look.

First, a reminder: An echo or delay effect has a clear, solid repeat after a few hundred milliseconds (or even a few seconds).

Reverb on the other hand has countless tiny reflection sounds that build up in volume and are fed back to the ear after being mixed with the original (“dry”) signal. That’s the main reason you hear an expansion of sound instead of a distinct repeat.

Parameters that affect the sound of the reverb are:

With physical reverbs (plates or springs), some of these were fixed by the dimensions and properties of the physical devices. Nowadays the parameters are all easily controllable with electronic reverbs.

Past that, everything is either a variation of the above, or a specialized function. Space and realistic expectations limit me from listing everything! However, the above three parameters will get you there 99.99% of the time. They are the most crucial settings, and the backbone of any reverb.

From the humble spring reverb all the way to the beastly EMT plates, let’s see some of the modern offspring of all things that go “sproing”!

As mentioned above, uses a spring tank for that “surf” sound.

As found on guitar amps. THE Fender reverb sound!

As mentioned above: large plate in a room driven by electromagnetic transducers. Metallic, bright sound.

Real plates were huge. This one’s built into my DAW. Think you could tell the difference?

A good representation of the tonal color of a typical plate reverb.

Simulate recording rooms. Small to large. Usually have a warm but tight sound. Great for drums, and general recording purposes.

Just what it says. Works for all general applications.

Same concept as the plate. Can you bring a hall to your studio?

The power of modern software effects allows for modelling of weird and wonderful environments that used to have to be created as real world environments. Now made virtually, at the touch of a button!

Great use for software. Can you tell the difference?

It actually sounds like the name. Consider what studios did years ago for the sake of creating ambience! Believe it or not, an old colleague had converted his old house heating oil tank into a reverb chamber. Much, much easier to do it the DAW way. And I can personally vouch that the sound is identical; not to mention the infinite versatility I have with today’s technology!

Very distinct sound as a result of cutting off (gating) the beginning or ending decay of a reverb. A haunting sound is the result of the abrupt onslaught of reverb due to the chopped off decay. Huge in ‘80s music; especially drum sounds.

Similar in function as a reverse delay. Only this time, the whole reverb from the initial ramping up with pre-delay, all the way to the decay are completely reversed. Great for special effects (especially the horror movie genre), or for any adventurous musician that craves some ear twisting. Listen to Latin spoken backwards – that will give you an idea of the sound!

A little extreme; but still, a good demonstration of the fundamental similarity between reverse and gated reverbs.

A variation on the above.

A combination between tempo and rhythm synching mixed with reverse reverb.

The latest in software and hardware based reverbs. These are by far THE most complex and advanced systems. Not only do they simulate a reverb “type,” they actually model the exact area you want; right down to the incidentals, such as room furnishings, full, partially full, or completely devoid of people, and the exact sonic characteristics of the area in question.

Using complex math and software, the most desirable “sound spots” in the world have been virtually modeled; from the Sydney Opera house all the way to Carnegie Hall.
Are you getting the picture? The power and accuracy of these units is astonishing.
Naturally this is reflected in the cost. Still though, even the most expensive convoluted processors, or any reverb for that matter, is still a drop in the bucket compared to what a real plate reverb cost back in the day. (Factoid: EMT introduced their original plate way back in 1957)

Reverbs, as any sound effect, come in all sizes and formats from compact pedals, to rack mount studio units, all the way to software plug-ins for most DAWS.

Does this last sentence look familiar? You should know by now, that all effects are available in those three formats!

Some of the usual suspects in high-end reverbs today:

…and on the software side, arguably one of the best, if not THE best:

Even some more “budget” conscious makers now offer quality that only “big boy” studios had 20-30 years ago.

It’s a wonderful time to be a musician or studio engineer!

Usually I have some kind of training assignment for you to set you on the right course. Well, today there really is no “assignment” per se.

You’re not memorizing formulas, or trying to remember frequencies, or anything of that nature.

You are learning about these timeless classic effects. The reading you’ve just done was step one. The sound clips above will cement what you read.

So, my advice: listen and absorb the different types of delays and reverbs demonstrated. Simple enough.

However, I’m not letting you off the hook entirely! There is a condition to this homework-less “non-assignment”.

If I get can impart the spirit of experimentation to you – I have done my job!

Okay, I guess that does qualify as an assignment. Enjoy!

Now for this week’s bonus question:

Who is the original wah-wah effect named after – and why?

What are your favourite uses of reverb effects? Got any horror stories of mis-use or bad taste? Tell us all about it in the comments, below! Next time around: That funky modulation…