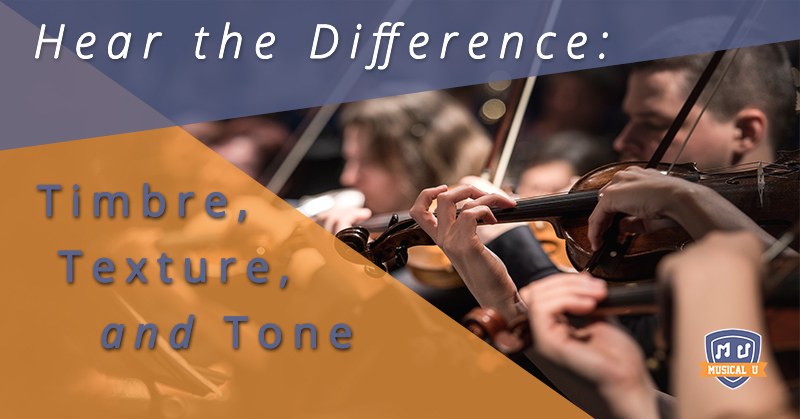 Even among seasoned musicians, the terms “timbre,” “texture,” and “tone” are frequently misunderstood and misapplied. After all, each of these is used to describe the quality of musical sounds; how different can they really be?

As you’ll soon discover, there is a significant difference between each of these related (yet very distinct!) musical terms. “Timbre,” “texture,” and “tone” all have their roles and functionalities for musicians learning to differentiate musical sounds by ear and it’s important to be clear about them.

Here’s what you should know about how these terms are different – as well as how they work together – to describe the overall quality and characteristics of a sound.

“Timbre” is the unique and distinctive sound that belongs to a specific instrument and helps the listener to distinguish it from any other instrument or source of sound. For instance, timbre is what makes a guitar sound like a guitar and not like a flute, a piano, or a violin.

“Texture” is sometimes used loosely to mean “the timbre of multiple instruments playing together” – for example talking about a music recording which has a “simple, sparse texture” or a “complex, ever-changing texture.” This is a common usage in the world of music production when discussing audio frequencies and effects.

A more specific definition of texture is used in music theory and harmonic analysis which specifies the number of distinct “voices” present in the music and how they relate to each other.

Often each “voice” (meaning a “part” or a “line” – not necessarily a singer!) is played by a different instrument, so there are close connections with the looser definition of “texture.” However, since the word “timbre” can equally be used for a group of instruments as each one, it’s more useful to stick with the more precise and distinct meaning of “texture.”

The texture of music can fall into a number of distinct categories, including:

Learning to hear the different categories of texture helps you to understand and appreciate the power of musical arrangements more deeply.

Of these three terms, “tone” is perhaps the one that is used most frequently among both musicians and non-musicians (and often incorrectly). While “timbre” refers to the quality of sounds among different instruments, “tone” can be used to refer to the quality and frequency of a sound as compared to itself. This sounds complicated, but what it really boils down to is the difference in frequencies of low sounds (“bass”) and high sounds (“treble”).

As an example, imagine that you are listening to someone playing an electric guitar. The guitar’s tone control is turned all the way to the lowest frequency setting so that it produces a very deep and low sound. Suddenly, the guitarist moves the tone control all the way to the highest setting so that the sound is very piercing and sharp. The timbre of this instrument is unchanged and they may repeat the same notes as before, but the tone has been altered dramatically.

For many new musicians, it can be tempting to skip over the technical details and jargon associated with learning about music and get straight to “the fun stuff.” However, as you move forward with your musical training, understanding the difference between crucial terms like these can help you progress and grow as a musician and serve as a steady foundation as you continue to perfect your craft.

What questions do you still have about the difference between timbre, texture, and tone?