Home » Ear Training » Genres » An Introduction to the Baroque Era

An Introduction to the Baroque Era 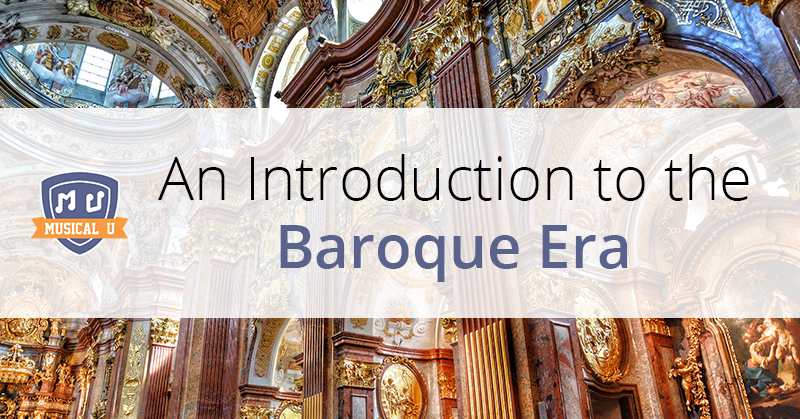 Studying music opens up a whole new world of expression. What you may not realize, though, is that much of what we think of today in terms of “feelings in music” stems from music of the past. Arguably – and more specifically – “feelings in music” came from the baroque period.

The baroque era is one of the richest and most diverse periods in music history. The art and music of this era were largely commissioned by the church and royalty to bring laymen in touch with the artistic world through emotional intensity, rich texture, and ornate beauty.

What is “baroque” and when was the baroque period?

The term baroque comes from the Portuguese barroco, or “oddly shaped pearl,” which was used for the architecture and artwork that was being created at the time. Music from this period was known for being highly ornate and unforgiving, but resulted in masterpieces from a number of composers, such as Bach and Handel. The baroque era took place between approximately 1600 and 1750. However, it’s not a period of time. Rather, it’s a style of music.

There are several things that set music from the baroque era apart from other periods. You can listen for each of these when trying to identify or appreciate baroque pieces:

Contrast. Music from the baroque period is known for its distinct changes in dynamics, combining solos and ensembles, and its varying sounds of depth and texture. All these concepts played a vital role in many baroque compositions.

Complexity. Baroque music was a time of experimentation and expansion. Composers used many different forms and complicated variations. Most pieces follow a fast-slow-fast format and are notoriously difficult to play.

Basso Continuo. Also known as figured bass or thorough bass, this is a method of creating an accompaniment from a composed bass part by playing the bass notes and improvising harmony above them.

Doctrine of Affections. Composers in the baroque era attempted to communicate not just one emotion, like happiness, but a whole range of human emotions in their music.

Different instrumental sounds. The baroque period contained several instruments from the Renaissance period, including recorders, viols, flutes, lutes, and a whole range of string instruments. However, the biggest and most omnipresent instrumental development made during this era was the harpsichord.

The first part of the baroque era is associated with genres originating in Italy, including the cantata, concerto, sonata, oratorio and opera. Antonio Vivaldi is a well-known composer who’s especially famous for his concertos like the Four Seasons.

The most influential figure in baroque music is Johann Sebastian Bach. The amount of work he composed is immense and includes several masterpieces. One of his most popular works is the Toccata and Fugue in D minor BWV 565. This majestic yet haunting piece has been credited as the greatest organ piece ever created.

Even though Italy played an important role in the development of baroque music, other Western European countries made equally important additions and their composers created their own unique styles. This led to differences between nations in terms of the way music was composed and conventions of performance. These differences also played a role in developing the baroque music that we experience today.

The baroque era pushed the appreciation of art like no other as music was becoming more accessible to the people. Pieces were not only composed to enhance the listening pleasure of the audience, but also to communicate effectively with them by deliberately evoking powerful emotions.

Although the baroque period ended over 250 years ago, its spirit and influence can be heard everywhere and its music still touches many people today.

Interested in learning more about different aspects of music? Join Musical U today to get access to powerful resources and a supportive community of musicians just like you.