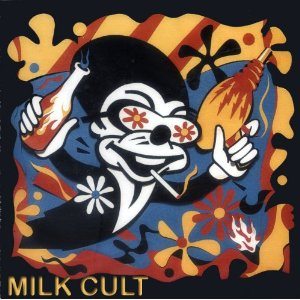 Steel Pole Bath Tub were an undeniably prolific band, releasing somewhere in the neighborhood of ten EPs and LPs between the years 1987 and 1995, as well as a heaping handful of singles. But even this level of productivity wasn’t enough for these noise-rock weirdoes, and the 90’s found the main members of SPBT participating in two fully-fledged side projects: Tumor Circus (with Jello Biafra), and Milk Cult, which was basically a pseudonym the band used when they wanted to explore their more sample-based, abstract electronic side. Some folks call it “industrial,” and as much as I’m not eager to describe this music as such (it’s not like it’s rooted in the KMFDM aesthetic) I guess that comes fairly close to hitting the mark. 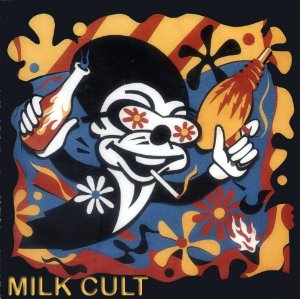 I heard Milk Cult’s Burn or Bury (the band’s second release) shortly after it was released in 1994, and found myself particularly excited about it because the album featured guest spots from two members of one of my all-time favorite bands (still true): Faith No More. Billy Gould, Faith No More’s bass player, does a guest spot on guitar on a pummeling, metal-laced track called “Bow Kiness Static.” And it’s cool. But what I was really excited about was hearing the guest vocals that Mike Patton contributed to the album’s opener, “Psychoanalytwist.”

Patton’s now widely known as a highly experimental vocalist, but in ’94, he was still branching out, and a vocal turn like the one he pulls out on this song, while not completely out of left field, definitely felt like a step in a new direction. And that was exciting to me. But what was really exciting, and what kept me coming back, was the song itself. Patton’s vocals end up being only one part of what is not only an infectious and catchy tune, but also an unassumingly intricate one, which covers a lot of ground in three and a half minutes.

The song opens with heavy breathing in the right channel, followed by a sampled crash in the left, before a swelling horn sample ushers in a looped bass line and the drums, which expand nicely to both ends of the left and right, giving the sense that they’re wrapped around the rest of the sounds. Patton’s panting vocals in the right channel quickly turn to chants, accented slightly by another noise that follows the bass loop for a short time. He joins himself in the left channel with guttural screams and squeaks, as his dark chants become more warbled and chaotic. Soon he’s squawking on both sides, though slightly more rhythmically and quicker on the left.

As the song begins a preliminary breakdown around the minute mark, Patton’s vocals in the right channel stand alone, and he begins a long string of percussive mouth noises (“tisk tisk tisk”) that continue as the crash sample and horn part from the beginning repeat, leading into a section where the drums and bass cut out, replaced by what is either a bass-drum-type record scratch, or Patton beat-boxing. Either way, it becomes the rhythm section, and a halted, descending metallic noise enters on the middle-right for the first time.

Patton’s Vocals in the Right Channel

Soon it’s nothing but the makeshift percussion, and Patton providing additional percussion with his voice. That bare-bones transition only lasts for a few bars. The bass loop kicks back in around the 1:45 mark, along with a tinge of the metallic sound, and the vocals make a return in the left channel.

For almost the next full minute, Patton’s stutter-stop vocals lead a chaotic charge that also includes a few other non-vocal blurts and bleeps that are hard to identify (see if you can hear them), as well as the horn sample and the full-on return of the halted metallic element.

The drums finally come back in at 2:34, returning the groove as Patton goes silent for a short spell. He returns in both the right and left channel after another swell of the horns, again shape-shifting his voice with cackles and screams. If you listen close around the three-minute mark, you can actually hear two tracks of his vocals in the right channel, slightly overlapping with one another.

Tracks of Vocals in the Right Channel

The song dies down as the drums come to their natural end, the bass loop is faded out, Patton’s percussive vocal in the left channel closes out, and his scream in the right dies down in unison with the halted, descending loop. It almost feels like the track is powering itself down (much like another song I’ve discussed, KXP’s “Mehu Moments”). Fitting, for such a propulsive, madness-filled tune. 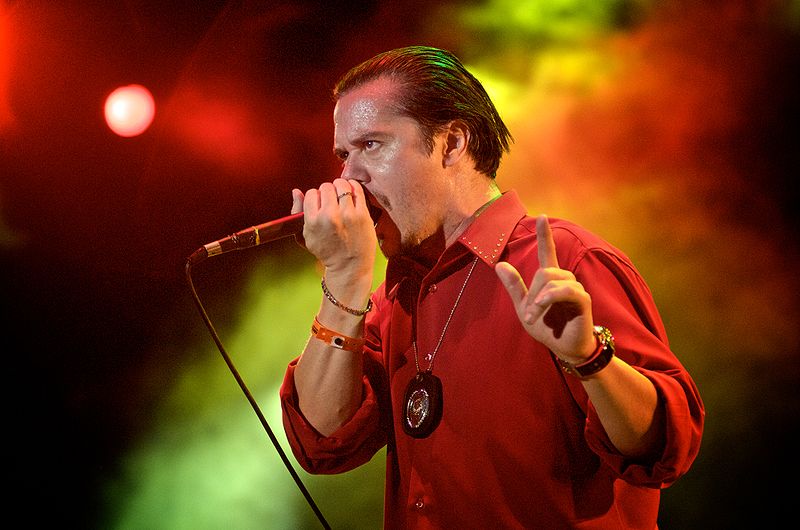 This is another one (like Radiohead’s “Give Up the Ghost”) that contains an element that remains unchanged throughout the course of the song: although the bass does disappear for a short time in the middle of the track, the actual part being played is a simple loop. On the other hand, the drums seem to be live, which makes for an interesting mixed rhythm section.

Strap on your headphones and really attempt to take in all that’s happening in this track. It can be a little abrasive in parts, but I also think there’s a solid groove here that makes this song (in an unusual way) really catchy. Also try to listen to Mike Patton’s vocal parts separately from each other, and then their combination together. Concentrate on the part in the left channel, then the right, and then (and it might help to remove your headphones here) listen to the song as you normally would and see if you can hear the ways they combine to provide an overall feel. Is it hard to do that after focusing on them each on their own?

Further listening: Milk Cult’s entire Burn or Bury LP is filled with songs that, much like this one, are packed with elements that morph and move as the song progresses. If you liked this one, check out “The Fuzz Wah Song” or “Blue Godzilla.” They’re a bit more intense, but equally complex and unpredictable.

Have you discovered other hidden sounds lurking in this intense track? Or got a theory on why it all hangs together so well? Make like Mike Patton and let it all loose in the comments below…