Home » How To » Active Listening » Listen Close: “Give Up the Ghost” by Radiohead

Listen Close: “Give Up the Ghost” by Radiohead 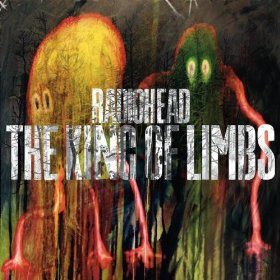 Sometimes it can feel like the music world is just treading water between Radiohead releases. Yes, we’ll listen to tons of other bands and fully enjoy many of them, but Radiohead remains one of the only groups that can still stop everyone dead in their tracks, getting them to drop what they’re doing and run to their computers, scrambling to frantically download the band’s newest offering. Perhaps I’m exaggerating a bit here, but I’m certainly not the first person to posit that Thom Yorke and the boys really do seem to be our modern-day version of The Clash – The Only Band That Matters. 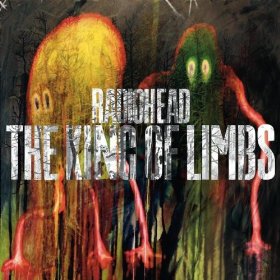 Radiohead makes it easy to be a fan of their music, because there’s so many facets to what they do: Their songs are sonically complicated, but still often melodic enough to get stuck in your head for days. Their lyrics are notoriously indecipherable, and even when revealed, seem to ask more questions than they answer. Each member of the band is highly proficient at his instrument, with madcap tinkerer Jonny Greenwood proving himself adept at gadgets a lot of us don’t even recognize. Yes, they’re the sort of band that bridges the gap between snobby musicians, music nerds, and passive fans who just like a good tune.

I was right there with all these folks in February, eagerly anticipating the release of the band’s eighth album, The King of Limbs. I’m having to restrain myself from diving into a full-on review of the record, because I could ramble on about it for a while. But I’ll keep it short, for our purposes here: at first, I wasn’t sure what to make of the LP. But after repeated listens, I’ve grown to love it. And one of my favorite tunes from the record is one of the more stark, airy compositions, and one that certainly didn’t click with me right away: “Give Up the Ghost.”

Give Up the Ghost

It was only when I watched a YouTube video

of Thom Yorke performing the song solo that I put together its minimalist origins and its heavy use of looping. There’s one loop that runs throughout the entire song (the “Don’t hurt me” line), and even after I had listened to the track probably thirty times (before I had watched the vid), it never occurred to me that that part remained static throughout the course of entire five minutes. In the live version, it’s obviously tough to miss this – you can watch Yorke initializing that loop, as well as the others that chime in towards the end of the song. But on the album version, the band builds the composition so gradually and carefully that you never have a chance to get bogged down in any repetition. It’s really impressive.

The song starts with what sounds like a field recording of birds chirping (just a guess), followed by the thump of a bass drum (Yorke bops the mic in the live version to create this effect), and then the main loop enters in, panned left, though you can hear a really faint echo of it in the far end of the right channel as well. The acoustic guitar chimes in, accented by Yorke’s hand thumping the body of guitar in time with the initial bass drum hit. This is the main section of the song, and these parts remain mostly unchanged for the duration.

Around the 40-second mark, a humming, bass-y plucking enters in, and I’m hesitant to even speculate on what it is. (Greenwood reaching into his bag of tricks, no doubt.) This is where the track really begins to expand, with that rhythmic blipping filling the far ends of both the left and right channels and taking a song that was almost brittle and hollow up to this point and warming it over with fluid tones.

At about 1:30, the right channel swells with what sounds, at first, like distorted strings or horns, but is quickly revealed to be another loop: Yorke singing “In your arms” twice. Yorke begins mirroring this loop around the 2:10 mark, adding even more depth to this already full, swarming refrain.

Yorke mirroring the ‘In Your Arms’ loop

This loop actually cuts out for a few bars at the 2:35 mark, where the peripheral blips rise up, and so does the guitar (see the insert box for more on what’s happening harmonically here), as Yorke sings the titular line to the song and then dives into a higher-pitched cry of “In Your Arms” that seems to be on a delay, echoing repeatedly.

Interlude: Loop Cuts Out for a Few Bars

There’s a powerful moment around 2:35 in this track where the guitar harmonies suddenly give the song a bright and substantially different feeling before returning again to the two alternating chords which carry most of the song. (see the clip marked ‘interlude’ above)

So what’s going on to create this clear difference in mood?

There are two things at play. Firstly, a temporary change of key – the alternating D major and A minor chords which make up most of the song have established the key as G Major. The B minor chord used for the first time at 2:35 hints at a change coming, and then the F major chord has the impact of this change, as it belongs to the key of C Major rather than G Major (note these keys are adjacent on the circle of fifths, so it’s a common transposition to use). The C major chord is then used as a ‘bridge’ back to the G major key (as it’s a member of that key too), re-establishing the original key as the song returns to alternating D major and A minor chords.

The other factor at work here to create the change in sound and mood is that the F and C chords used are actually major 7th chords rather than regular major chords. Major 7th chords are often described as having the ‘brightest’ or ‘happiest’ sound of any chord type, and so using them here helps make sure the temporary departure has a bright, happy feel to it.

The slow fade that ends the song feels appropriate, as the elements are calmed down and eventually muted one by one, with the vocal loops and acoustic guitar dying out first, leaving only the left-and-right bass-y blips as a fluttering effect rises up in the right channel, bookending the sounds of birds that began the song. You can also hear some shadowy percussion in the left channel, though only for a few moments. A strange end to a relatively strange song, and I think it works perfectly.

Slow Fade at the End of the Song 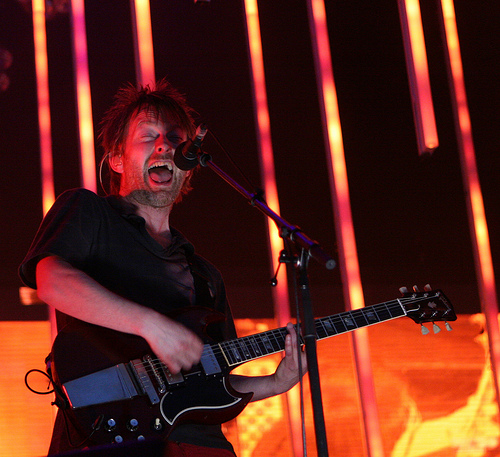 When I first started listening to this track, my focus was on Yorke’s guitar part and the way his vocals danced around it, because it stuck with me even after I had finished listening. Now I can’t stop searching the song for more hidden bits, as I try to figure out exactly what is happening and when things start and stop.

This really strikes me as a great track with which to practice your critical listening skills. As usual, headphones are recommended. You’ll probably find things that I missed. Let me know if you do.