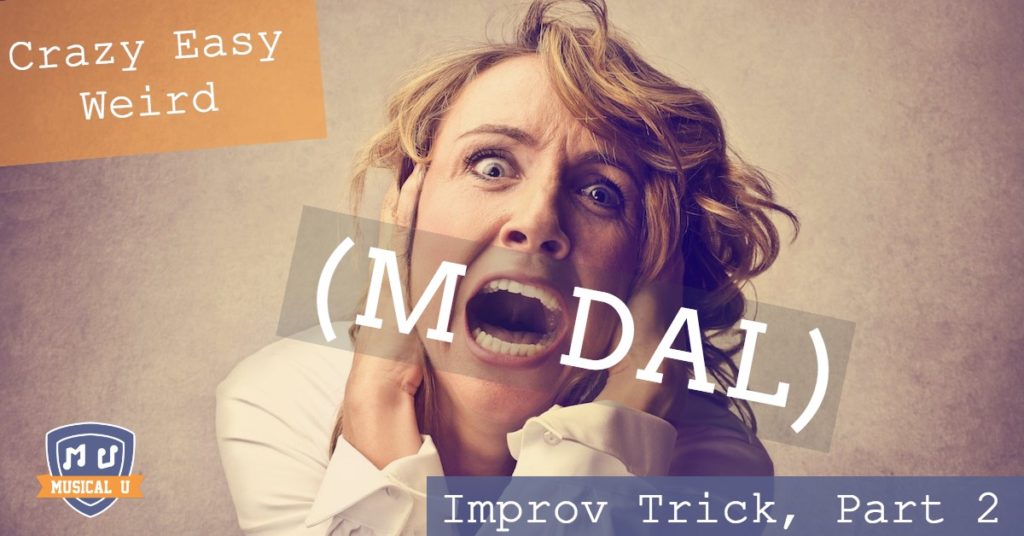 Oooo modal… it sounds so mysterious, so deep and so difficult. Like something you should really wait to learn until you’re way advanced, like a super-shredder metal guitarist or a jazz genius.

Here’s the truth that we learned in Crazy Easy Weird (Modal) Improv Trick: modal improvisation is fun, easy, and a great way to build your instrumental, aural, and theory skills.

Before you try to wrap your head around a bunch of weird Greek names, it’s important to enjoy the simple modal experience. So, if you haven’t already, go on back and play with those modal improv ideas in Part 1. Then we’ll… Figure out how it works

Try this exercise: at the piano, sustain a low F with your left hand (repeat as necessary). With your right hand, improvise for a while on the white keys over this left-hand F drone, then change the left-hand note to D.

For now, I recommend starting here with single note drones, and giving yourself the time to really listen:

Yes, the right hand is picking from the same white keys, but the mood feels completely different. If you haven’t already, try it for yourself. Why is that?

If you don’t have a keyboard available, there are all kinds of ways to generate a drone note with your phone, computer, or another instrument while you improvise on natural notes.

In order to understand what’s going on here, let’s try a more systematic approach. Slowly, improvise for a while over each drone note. (Remember, in our left hand we’re going to stick with D, E, F, G, and A – please resist the temptation to drone on B or C for now.)

Focus on listening, and feeling the emotional qualities that are stimulated by each different drone. Write them down – a word or two is enough – as best you can. You can use a chart like this: 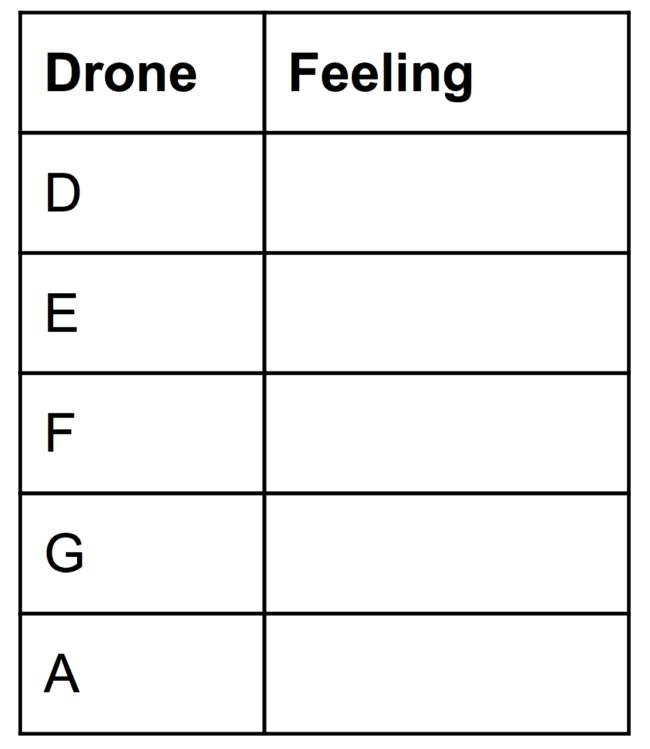 Doing this for yourself is the best! Once you’ve done your chart, you can have a look at mine – but until then, no peeking! 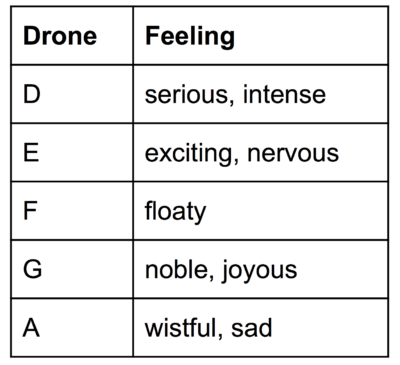 Why would they sound so different? 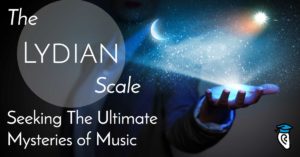 Think of our solar system. While we’ve seen pictures of what the whole thing looks like, your perspective on it will be quite different if you’re, say, standing on Mars instead of Earth.

What are modes anyway?

There’s some confusion about the word “mode” as a musical term in the first place. Let’s look at the two ways “mode” is used:

1. A Scale with an Attitude

In a general sense, musicologists recognize that different cultures organize their music with “modal systems” – which are more than simple sequences of notes (scales). These modal systems, such as Hindustani and Carnatic raga, or Arabic maqam, may start with a set of notes resembling a scale – but then they pile on all kinds of rules and nuances, including mode-specific ornaments and microtonal inflections. They can even be intended for performance at specific times of day (e.g. an evening raga).

2. Permutations of a Scale

However what we are learning to use here in Western modal improvisation is a more limited concept.

Here’s what happened in Western music: medieval composers of Gregorian chant music used a seven tone scale. Making the same discovery you just made, they arranged the tones in different church modes to reflect the moods of the text.

At first these modes were merely assigned numbers, but later medieval musicologists likened them to the ancient Greek modes (which they are not) that they read about in books and gave them their Greek names. So now we have the following system: 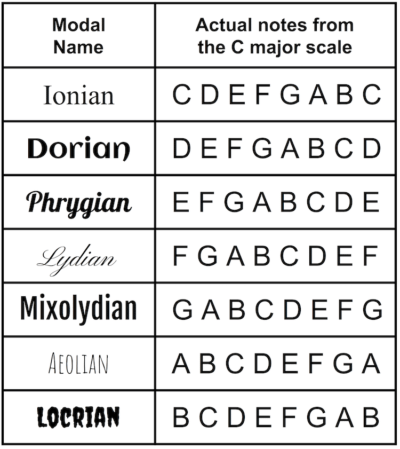 So, behind the scary Greek modal names, there actually lurks a very simple principle. Of course you can modulate this system to any major scale. And that’s it.

Yes, I’m sure you’ve noticed that the modes beginning on B (Locrian) and C (Ionian) are included in the chart. And quite possibly you didn’t resist the temptation to try them out – even though I recommended otherwise. (And you thought I wasn’t listening!)

Here’s the deal with Locrian: it sounds really strange. Disturbing. The biggest reason is that there’s no fifth. Yes, you can count up five notes from B and you’ll find F. But play them together:

That’s a tri-tone, my friends. In the Middle Ages, known as the Devil’s interval. So if you want to create a twisted, bizarre metal riff, go for Locrian.

That’s your tried-and-true Joe Vanilla major scale. The first scale you ever learned. What’s wrong with that? It should be the easiest.

The major scale, truth-be-told, is one of the most difficult scales for modal improvisation!

What!? Well, it all has to do with the tonal gravity we were talking about earlier. You see, the major scale has a very restless quality. It wants to keep moving and resolving, but never really quite gets there. That’s why classical symphonies go on and on and on.

Since that natural tonal gravity wants to pull the drone around to different chord tones (mostly the IV and V) improvisations over a drone in C simply seem flat.

One way around it is to lop off the “offending” tones that cause the restlessness in the major scale. That produces the major pentatonic scale. You can learn more about improvising with this amazing scale when you open the vault of our Pentatonic Archives. 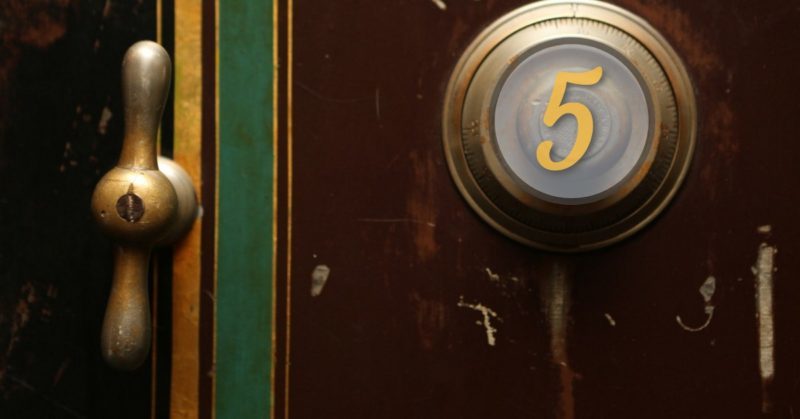 Modal improvisation is one of those great musical gifts that can sound beautiful almost from the beginning, and continue to grow. You can take it as far as you want: just ask John Coltrane or Steve Vai.

When you’re improvising in a mode, go slowly and listen to the relationship between the melody and the drone. Then try moving drones.

Once you’ve fully absorbed the modal sound in C major, practice the modes as scales or as arpeggiated triads in as many keys as possible.

Once you’ve sensitized your ears to the dynamics of tonal gravity, you can return to chord progressions, where you change modes when you change chords. For example, the Dorian mode sounds awesome with minor chords, and the Mixolydian mode rocks the seventh chords.

Even if you never take your modal improv beyond the white keys on the piano, there is so much to discover about how pitches relate to each other. So modal is nothing to fear – enjoy the infinite benefits to your ears, and to your new found ability to create meaningful new melodies.