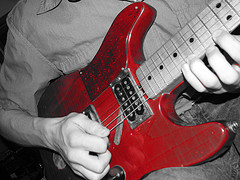 How many times have you listened to a guitarist and wondered “How does he make that noise?” Here are a few of the techniques players use to produce some strange and wonderful sound effects.

The guitar has many different techniques that can subtly alter the tone of the notes being played. The ‘musical’ techniques are primarily used to alter the sound of the transition from one note to the next, for example string bends and slurs. More ‘practical’ techniques, such as right hand tapping, are used mostly because they are the most efficient way to play a particular group of notes.

There are also techniques that produce unusual sounds that are not normally associated with the guitar, and that’s what we’ll be focusing on.

Body slapping is a musical technique, but not in the same sense of most guitar techniques. The guitarist hits the body of an acoustic guitar with the picking or plucking hand. The sound produced is very similar to a drum. Listen to it!

Body Slap With The Tip Of The Fingers

Body Slap With The Palm

This works because the basic principle behind how sound resonates in an acoustic guitar and an acoustic drum are pretty close to one another.

There are two basic methods to use this technique. The style used by Nuno Bettencourt in “More Than Words”

is to tap the guitar body with the tips of the ring and pinky fingers. The style more typically seen with Flamenco guitarists is to slap the body with the fleshy part of the palm right under the thumb. In both cases, you will want to mute the guitar strings with the blade of your palm at the same time. The mute and slap are one motion. It might take some practice to get used to incorporating this fluidly into your playing.

You may not have realised, but the revving motorcycle engine noises in “Bat Out of Hell” by Meat Loaf

and “Kick Start My Heart” by Mötley Crüe

are actually performed by the guitarist, rather than being a sampled sound.

You will need some type of tremolo bridge to make this noise. A floating tremolo bridge is a better choice, due to the larger range of motion, but not strictly necessary. This is a pretty simple technique, but takes some practice to use well.

You start with the tremolo bar pushed down slightly. The strings should be right at the point where it becomes slack. Pluck either the low E string or the E, A and D strings with the pick. Both work, but the one that sounds better will vary based on your equipment. Slowly allow the bar to return to the center point. You do not release the bar completely. You just apply enough force that the bar is slowly pushing itself back up.

You can make the engine sound like it is changing gears by pressing the bar back down for a split second before letting it start to come back up again. This can take some practice to get right! The trick is not particularly with how it is done, but that you release the bar at the right speed. If it is too fast or too slow, it won’t sound like an engine. 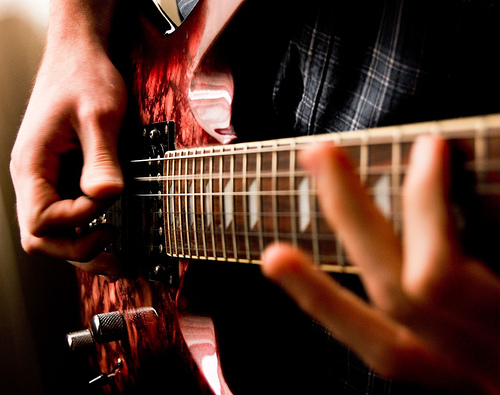 The pick slide is a common technique in rock and metal guitar work.

Feedback on a guitar works differently from microphone feedback. A guitar pickup is not specifically designed to pick up sound waves, like a microphone. Instead, guitar pickups are reacting to the vibration of the string. 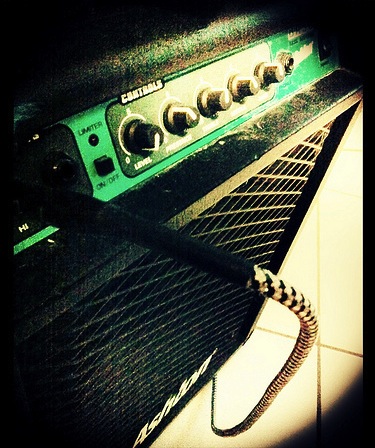 When a guitar is placed in front of the amp speaker, the sound waves from the speaker cause the guitar to vibrate. The physical vibration of the guitar in turn alters the sound produced by the strings, creating the feedback sound.

The only setting needed to actually produce guitar feedback is the volume. The guitar amp has to be loud enough to shake the guitar! “I Feel Fine” by the Beatles, the solo from “Anyway, Anyhow, Anywhere” by the Who

, and much of Jimi Hendrix’s guitar work

are some classic examples of guitar feedback.

Now go practice making and listening out for those unusual sounds… And don’t forget to come back and let us know how it went in the comments below!