Home » How To » Transcription » How to transcribe a song: 7 must-know tips and tricks

How to transcribe a song: 7 must-know tips and tricks 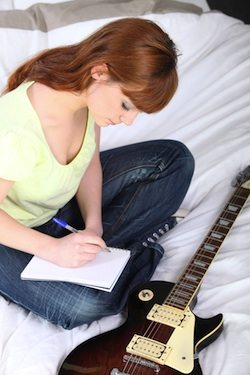 If you want to really understand what’s going on in songs you hear, there are few more effective training methods than transcription.

Taking the time to transcribe a song, working out the pitches and rhythms played by each instrument and how they all fit together is a truly powerful way to move your musical expertise and aural skills forward.

Transcribing a song by ear can seem like an overwhelming process at first though! Most guitarists do not approach it systematically. Often, people pick a random riff or lick in the song and just try to learn that first. Generally, taking a more structured approach makes the whole process much easier.

Here are 7 important tips and tricks to help you transcribe:

Good news: There really isn’t that much you need to transcribe a song, apart from your ears!

The CD containing the song is usually the best choice to transcribe from. Music file formats (like MP3s) can sacrifice audio quality to make the file size smaller, so if you use a file make sure it’s a high quality version – or you may be making your job harder than it needs to be!

All you really need is a media player that lets you jump to any part of the song you want. There are also specialist song transcription programs which can be a better choice. Most of the tools are not really necessary unless you are transcribing a song with 10+ simultaneous tracks, but other features (like being able to bookmark parts of the track) can be quite convenient and speed the transcription process along.

Transcribe! is one of the better programs for this. It is relatively inexpensive, has all the basic features you need and a convenient layout for accessing those features.

Audacity is probably the best free choice. It is not specifically a transcription program, but you can bookmark sections of the track and change the tempo without changing pitch. The layout is a bit less convenient, since it is actually designed for recording and editing, rather than transcription.

Audacity is general audio software which can be used for transcription

Transcribing the drum part first can make songs much easier to tackle. You do not need to accurately transcribe each fill; just getting the basic snare and bass drum patterns can be enough. The drum transcription gives a skeleton for transcribing the other parts of the song.

Getting the basic drum parts is also not a particularly difficult process, since you only need to be able to distinguish the different kinds of drums being used from one another. If you need help learning to do this, see our introduction to the sounds of the drum kit. 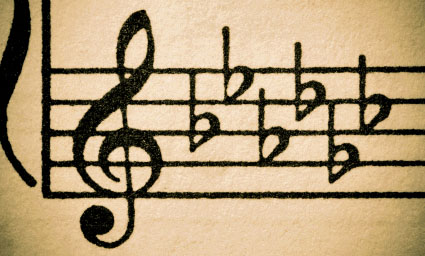 Most musicians neglect to actually get the key of the song before transcribing it. This isn’t relevant for the drums, but knowing the key of a song can make all the other parts easier to transcribe.

Here’s a simple method for finding the key: Just play every note over the song until you find the one that fits the best over the top of the track. This will be the key of the song!

There are plenty of alternative methods – for example, a guitarist might recognize the basis of a particular guitar riff without being able to recognize the specific notes instantly, and use that to figure out the key directly since in most cases a prominent guitar riff will be in the same key as the song.

Whichever method you prefer for finding the key of a song, make sure you do figure it out. Knowing the key will make everything else that follows much easier.

The next part of the song you should transcribe is the rhythm instruments. In most rock and metal bands, the rhythm section is usually the bass and rhythm guitar. In some cases, there will also be some keyboard or piano work that falls into this category. The rhythm parts for the verse and chorus sections should be the first ones you transcribe. In most cases, the other sections will either use the same or fairly similar rhythm parts.

Dividing the song into its sections saves a good amount of time and effort.

Many songs only have 8-12 unique bars of music for each rhythm instrument. Instead of needing to transcribe three minutes of bass work, you might just have 16 seconds that are repeated over the entire song!

The lead instruments are generally the most time-consuming part of transcribing a song. At this point, you should have the drums and rhythm sections completed though, which will make it much easier to put the lead parts in the correct places.

Song melodies are not random! As you develop your ear training, it should become easier to recognize specific musical constructs. Most of transcribing these parts is just to recognize the key of the song and what is musically occurring. This will get easier with practice, as you learn to recognise more and more common constructs.

If you have extreme amounts of trouble with a song, there are programs that can slow down the song to make it easier to transcribe each note one at a time. You should try to avoid this if at all possible though. Using this method removes the aspect of transcribing the song based on listening to the musical aspects and shifts you into transcription by pitch recognition. It does work, but you lose the context of the given notes in the song itself. Try to avoid slowing down the song, except as a last resort for specific parts of a song.

Extremely long songs, such as “Paradise by the Dashboard Light”

Do not try to transcribe these types of songs in one go. Break it into the more logical parts and transcribe each as though it were its own unique song. “Paradise by the Dashboard Light,” for example, has three musically distinct sections. Trying to transcribe it in its entirety can be difficult, but each section of the song is much more manageable.

It may seem like trying to pick an easy song and build your way up would be a good way to build your transcription abilities. However this is not a very practical method because it is difficult to distinguish what is actually a difficult song! Most of the difficulty of transcription is distinguishing the subtle technical nuances.

For example, being able to differentiate between a straight legato, hammer-on, bend or slide during a lead guitar note transition. All of those techniques can be used to go from one note to the next, but each changes the transition sound very slightly. That aspect of transcription is never going away, no matter how easy the song sounds.

Occasionally, more virtuosic, difficult to play parts can actually be easier to transcribe accurately. For example, there are typically only one or two ways to play a 200 BPM passage of sixteenth notes, but a dozen effective techniques for playing 120 BPM passages of eighth notes!

Even taking a seemingly simple song, like Joan Jett and the Blackheart’s version of “I Love Rock ‘n’ Roll,”

there are still technical nuances to take into consideration. Joan Jett’s guitar part is fairly simple, and usually the one most people imitate. Ricky Byrd’s guitar part, on the other hand, has a decent amount of technical nuance given how simple the song is. Even on a simple song like that, most people trying to transcribe it are going to miss those nuances in favor of a simpler, less accurate version.

. It is considered one of the simplest rock riffs by many guitarists, yet virtually no one, outside Ritchie Blackmore, actually can play the technical nuances correctly. That is because the main riff is very specifically played without the pick, which gives those chords a slightly different tone. This is more difficult to notice because you very specifically need the pick for other parts of the song.

Getting the right notes, chords and rhythm for virtually any song is pretty easy. Getting the technical nuances, no matter how easy the song might seem, is where practice and experience come into play. Just try to get the basics of the song when you are starting out. As you get better at transcription, go back to songs you have already transcribed and try to get the technical aspects of the song down perfectly. This is a much better approach than trying to arbitrarily determine if a song sounds easy or not!

are both good songs for starting to think about transcribing songs using the tips above. Both of these songs are written to build up in the manner described. During the course of both songs there are bars of music with solo drumming; just the bass and drums; the bass, rhythm guitars and drums; and lead guitar, rhythm guitar, bass and drums. Trying to transcribe these songs can be a good way to get into the piecemeal mindset, before moving on to songs that are not conveniently written with specific sections like this!

Including a transcription task or two as part of your weekly instrument or ear training practice will advance your musicianship leaps and bounds. It will be hard work at first, but use these tips and you’ll soon get the hang of it. The more you transcribe, the easier it will be – so why not pick one of the two song recommendations above and get started?

If you have questions, tips of your own to share, or songs which you’ve found particularly easy or tough to transcribe – let us know in the comments below!