How did composers such as Bach and Mozart become the greats they were? Apart from seriously studying and practicing their craft, like many great musical artists, they were not above employing a few tricks-of-the-trade to make going about their business of writing music a little easier. Whether we are professional musicians, karaoke-night singers or amateur songwriters, we can all benefit from learning a few simple songwriting or performance secrets to improve our musical skills, break writer’s block or just have some childlike fun.

But first, let’s get caught up with our friends over at Musical U! 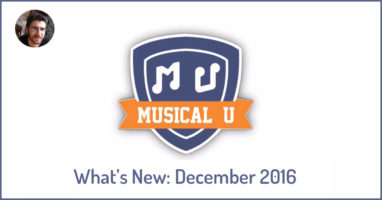 This month there were three major changes over at Musical U. The first was an overhaul of the “getting started” process for new members. Because Musical U offers such a flexible training system, they found the need to introduce an easier process to help new members figure out how they want to use Musical U to reach their own personal goals.

The most exciting part of the new four-step process is an improvement to the Training Planner. Musical U also rolled out a new solfa recognition quiz system.

The final update inside Musical U this month ties in with the holiday season. People often ask how they can give the gift of Musical U membership to someone else. Now, Musical U has a new gift card system, which is an easy way to give the gift of music. 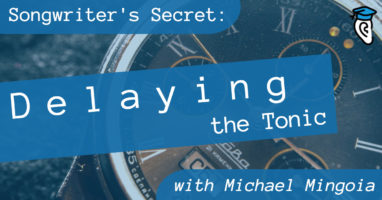 Scales are supposed to play full circle and when they don’t, it can bother our musical ears. We don’t even have to be a musician to be frustrated by being left on the leading tone and denied the resolution to the tonic. For songwriters, this is great news! This ingrained cultural effect can be used to great advantage in grabbing your listeners’ attention and holding it with an iron grip.

Michael Mingoia  has been on stage since the age of ten. In addition to being a successful actor, he has forged a career as a songwriter, having won many songwriting contests and written for such people as reality TV giant, Mark Burnett. We recently had the opportunity to ask Michael to share how you can work that feeling of “delayed gratification” into your songwriting to keep your listeners much more engaged.

If you’re playing a tune, try delaying the tonic when you reach the end of the song and see what kind of reaction you get. Mike of Electric Campfire gives you examples of how a delayed resolution can help you to pull the unexpected from your playing.

Mozart used many tricks to write his music and delaying the arrival of the tonic was one of them. Henry Flurry explains how Mozart played with rounded binary form in this lesson.

Musical tension includes anticipation of a climactic moment in the very near future – that’s what keeps an audience listening. Gary Ewer explains how to avoid the tonic to create tension in your songwriting. Whoever declared disco “dead” obviously has never been to disco night at karaoke! Catchy, danceable, and covered by everyone from singing contestants to pop stars, disco songs continue to permeate current pop culture. So, karaoke connoisseurs, be sure to have a look at Musical U’s list of the seven best songs for a disco karaoke night. At first you be might be afraid or even petrified, but with Musical U’s list on hand you will survive!

Even if you’re a beginning singer, karaoke night is a great way to practice. Take Lessons gives you the lowdown on preparing for karaoke night and how to choose the best song for your voice.

You don’t need to be a professional singer to enjoy karaoke, but you still want to rock a song or two, right? Lucky Voice Karaoke lists the 20 easiest karaoke songs to sing.

We’d love you see everyone take a stab at singing a karaoke solo, but if you don’t feel ready yet, how about singing a song with a few buddies? Insider Monkey lists eleven great group karaoke songs. Every voice deserves to be heard. Even though not every voice will have universal appeal, (by society’s standards), eventually every voice will find an appreciative audience. An acclaimed vocal performer with a three-and-a-half octave range, Singing Voice Specialist Dr. Daniel K. Robinson believes that “It is the birthright of every human being to sing.”

Dr. Dan’s greatest passion has become helping others claim this birthright and he has helped thousands of singers find their true voice and reach their singing goals. We recently had the opportunity to ask him about his career, teaching methods and scholastic vocal studies.

Vocal health is very important to voice instructors and performers like Dr. Dan. Theatre Nerds gives you these 14 important tips to maintain your vocal health.

If you want to “sing like a star”, decide which style of singing suits you and then stick with it. Sing Like A Star gives you the lowdown on how to sing authentically in different styles. Mozart did it. Bach, too. What is that, you ask? They played songwriting games to create new melodies. It’s inevitable that some point you will reach a block in your songwriting process. A great way to break out of that rut is to play a game that both you – and your child! – can enjoy. Games can inspire us to connect with our inner creativity and overcome our adult inhibitions. Our own Andrew Bishko, Content Editor for Easy Ear Training, was inspired by a scene in the movie Amadeus to write a songwriting card game for his son. Grab your kid and a deck of cards and try playing Andrew’s game. It’s as easy as ace, two, three!

Now matter how good you are at songwriting, sometimes the juices just cease to flow. Songcat suggests some fun and creative games to break writer’s block.

Are your kids bored with Christmas shopping? Why not use it to their creative advantage? With Christmas right around the corner, Geek Dad suggests writing parodies of classic holiday songs to stave off boredom and foster musical creativity in your kids.

Making music doesn’t always have to be a hard, scientific process. Sometimes it can be fun and easy, if someone would just share a few simple shortcuts with us. Even if we are professional musicians, sometimes we need to “cheat” just a little to make our jobs slightly easier. If Mozart can do it, so can you!

We leave you this week with the music of another great artist – Hazel Scott. The famed jazz and classical pianist from the 40s and 50s makes “Taking a Chance on Love” look fun and easy.