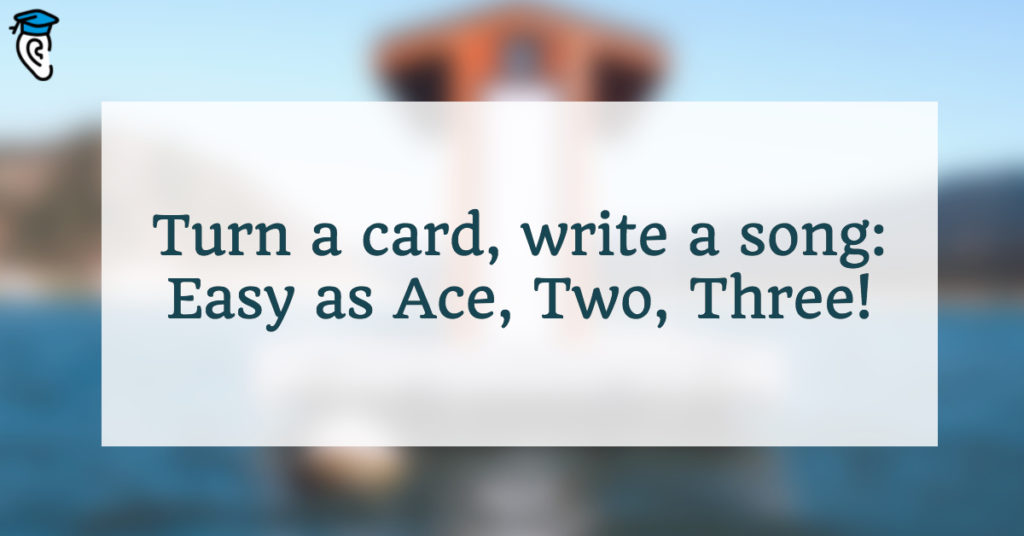 Why so serious? Could it be that you’re stuck in a songwriting rut? Maybe you should try playing a game to find fresh songwriting inspiration! Even great composers like Mozart enjoyed playing songwriting games because they are a great way to inspire not only your creativity, but also your child’s.

Andrew Bishko was moved to create a songwriting game for his son after viewing a scene in the movie Amadeus, in which Mozart rolled a pair of musical dice and used the notes that came up to write a new melody. Try playing Andrew’s songwriting game to get those songwriting juices flowing. All you need is a deck of cards and pure imagination.

This is a summary post.
→ Read the full article

To begin playing Andrew’s songwriting game, you’ll first need to sort a deck of playing cards, which will be used to determine the melodic line of your song. Andrew recommends removing all but the “ace” through “7” cards, which will be the playing cards used to represent the seven musical pitches in a scale. It’s probably best to start out using a scale without a lot of sharps or flats, such as C major.

Pick a Card, Any Card

Next, shuffle the cards and then pick ten cards from the pile and line them up – that’s the line of your melody! You may have to decide whether or not to move the melody up or down to a note. Andrew suggests choosing to move the smallest distance between notes. For example, the interval from C up to A is a sixth, so instead move from C down to A, which is the interval of a third.

If the range of the melody is too low for your child, move (i.e., transpose) it up. When you transpose a song, the notes move up by the same amount and the intervals maintain the same relationship.

Now that you’ve established your melodic line, it’s time to add the rhythm. To create the rhythm of your song, start by using use short, simple beats such as half notes, quarter notes and eighth notes. Use the picture cards to represent the rhythm: King for a half note (2 beats), queen for quarter notes (one beat) and jack for eighth notes (half beat).

Decide whether or not to group the notes into measures of 3 or 4 beats. If the rhythm is a little hard to sing, you will likely have to adjust it a little. For example, you may need to add a rest on the end of the song to “square off” the last measure or occasionally change eighth notes to quarter notes.

Now it’s time to start adding some lyrics to your song. To begin, have your child sing the melody along with you and encourage them to add any words that they want to, even if it’s just one word. It will be your job to form their ideas into lyrics that fit the rhythm of the melody.  Rhyming isn’t necessary, but if you want to rhyme your lines, try rhyming the second and last lines. Also try to find creative ways to match the lyrics to the movements of the notes. For example, long notes can create suspense or descending notes might suggest looking down at something.

Waste Not, Want Not

What is a songwriter’s best friend? Repetition! Repetition holds musical compositions together, but too much exact repetition runs the risk of become boring so you will need to create some variations in the song to hold the listener’s attention.There’s no point of writing something new when you already have a good melody, so keep the melody and write new lyrics for variations.

Borrow From the Best

How do you find the next line of your song? At this point, instead of referring back to the cards, we’re going to find an easier way to lengthen your song, by borrowing from the best. By choosing ten cards (notes), your phrases are roughly three measures long. Similarly, most popular and folk songs, which were anonymously composed by some amazing composers, use phrases in multiples of two measures.

The great Baroque composer Johann Sebastian Bach wrote pages of music from just one or two measures of melody. How did he do it? One of Bach’s favorite tricks was to run the melody backwards, or retrograde. If it ain’t Baroque, don’t fix it – use it! Mozart, too, understood a good folk song and often structured his pieces just like many folk melodies, which are grouped in AABA form, following the “rule of three”. In AABA form, the A sections are similar, but the B section contrasts.

Your song might not be the greatest composition or a big hit but that’s not the goal. Hopefully, you had a good time. Plus, you exercised your melodic, rhythmic, and lyrical muscles all while getting your creative juices flowing.

Looking for more detailed instructions and an example? Play Your Way In: A Song-writing Game.

Play moves us past our grown-up inhibitions and self-criticism to the source of our creativity and songwriting games are a great way to connect with our inner songwriting child – and to your own child, as well. After all, why do you think we call it “playing” music?