Home » Ear Training » Genres » An Intro to the Romantic Era

An Intro to the Romantic Era 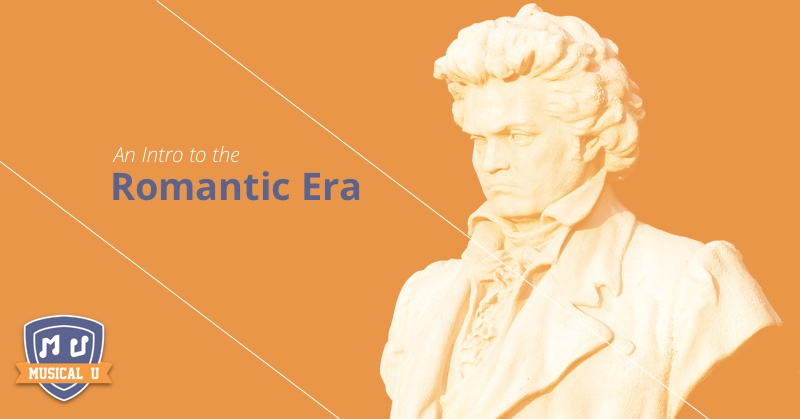 When you hear the phrase “romantic music,” you might think of love songs on the radio or from your favorite rom-com. But Romantic music is actually a genre of classic music from the 18th and 19th centuries. While the Romantic era doesn’t boast some of the most recognisable composers, it speaks to something deep within people.

The work of many men and women during the Romantic era was paramount to conceptualising art as a way of expressing emotion rather than just representing the physical world. By learning about Romantic compositions, you’ll add skills to your repertoire that will increase your ability to create unique, poignant music.

What is “romantic” and when was the Romantic era?

Unlike previous musical movements, such as the Baroque and Classical periods, Romantic music wasn’t a reflection of society but instead, a contrast from it. The movement began in the 1790s with the later works of Hadyn and Mozart – both composing giants of the Classical era – and ended around 1910, lasting through the heart of the Industrial Revolution.

While the rest of society was moving forward by conforming to standard principles and placing a priority on the objective world, Romantic music moved toward the spiritual and subjective experiences of each person’s life. Some criticised the movement for lacking any central meaning because it dealt with varied ideas, such as connecting with nature, supernatural occurrences, and the infinite; but it undoubtedly created musical pieces with intense emotional appeal.

Rhythm. Romantic pieces frequently used complex rhythm and changes in time signature. Even different works by the same composer would utilise distinctly different techniques. Additionally, as the skill of musicians increased, the tempo of the music dramatically increased.

Form. While Romantic composers experimented in many different ways, one old norm they kept was the form of their music. The most common works were operas, concertos, and symphonies, though there were new forms introduced as well. These were generally smaller pieces, such as nocturnes and waltzes.

Melody. As the Romantic movement stressed subjective expression of emotions, it did this mainly through melodies. Pieces often featured extremely lengthy ornamented runs to display the technical talent of musicians and took advantage of changing sound dynamics that increased the emotional appeal of the music.

Timbre. As the music became more subjective, the size and instrumentation of the orchestra grew. The tones of the orchestra became much more varied, particularly by adding more to the woodwind and brass sections. Special musical effects were also added to create unique pieces and profiles for each composer.

Fryderyck Chopin. Easily the most well-known composer from the period, Chopin (pronounced Sho-PAN) represents an interesting figure because his success relied solely on smaller musical forms. For example, he didn’t write even a single symphony, which were the dominant form at the time. Nevertheless, Chopin has among the highest number of works that are still used in modern classical repertoires.

Franz Liszt. The Romantic movement is known for being eclectic and widespread, and no one personified those qualities better than Liszt. In addition to being one of the time’s most prolific pianists, he made contributions in fields such as literature, education, and philosophy.

Pyotr Ilyich Tchaikovsky. With a name as long as it is hard to spell, Tchaikovsky remains the most ubiquitous example of Russian Romanticism – his unique blend of nationalism with the ideals of the Romantic era is uniquely Russian. Moreover, he is known for having some of the most beautiful melodies of the time.

Other notable composers from the Romantic era include Robert and Clara Schumann, Richard Wagner, Giuseppe Verde, and Johannes Brahms.

The Romantic era was one of the first times in history that art made a serious divergence from the popular trends of society rather than following them. Not only did it encourage individualism and a serious connection with the spiritual, but it also began to offer major opportunities for female composers – another important first. For these reasons, it’s easy to see why a good knowledge and appreciation for Romantic music persists to this day.

Do you have some favorite pieces from the Romantic era? Comment and tell us what you think!