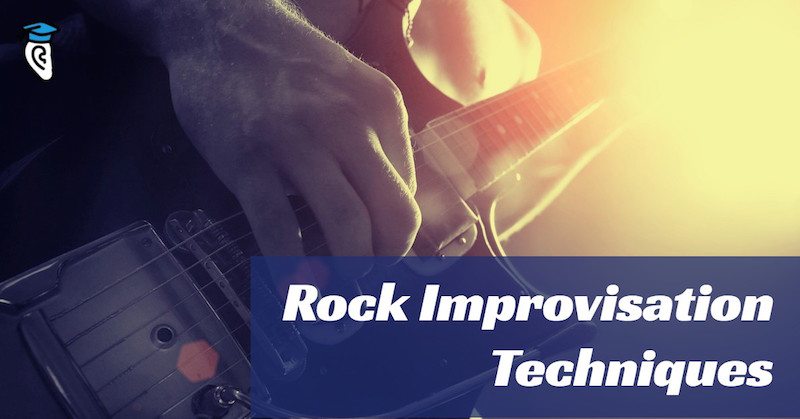 What are the fundamental principles behind rock improvisation? What core concepts do you need to know in order to improvise in a rock style? Where should you look to see rock improv in action and learn from the masters? In this tutorial we’ll explain the essential rock improvisation techniques and give examples of classic rock solos you can learn from.

First, let’s travel back in time to the beginning of the 20th century, and take a look into a genre that was of significant importance to all improvisation in Western culture. We are of course talking about the blues. Blues is the foundation of rock’s lyrical content, compositional approach and form, and improvisation itself.

On the lyrical side, the heartbreak topics classic to blues are also present everywhere in rock. In terms of composition and form, we can spot common blues structures like 12-bar blues and call and response form. And for the improvised melodies themselves, rock improvisation is saturated with blues scales and blues-derived pentatonic scales.

We’ll begin with three important ideas that underpin a lot of rock improvisation. Two are structural and the third is about how you express musical ideas within those structures.

Knowing that the rock genre has its roots in blues, the first of these three ideas should come as no surprise…

A simple “12-bar blues” harmonic structure is common in rock improv and orders the I, IV, and V chords like this:

For example, in the key of C:

Listen to “Dust My Broom” by Elmore James to get an understanding of how blues form sounds. Count the bars in your head and paying attention to every chord change. By listening to it a few times you will never confuse the 12-bar blues form with anything else and you will recognize it everywhere.

The call and response technique alternates between one phrase and then another—usually between voice and another lead instrument such as guitar, piano, sax, etc. Call and response structures rock music in both larger and smaller ways, from short motives to longer sections.

“Black Dog” by Led Zeppelin is an easy example of call and response. Jump to [0:05] to hear Robert Plant opening with a vocal line, followed by the whole band playing a response. The back-and-forth continues few more times.

Call and response brings more interaction to your improvised solos, especially when you’re playing with musicians who have good ears and who are actually listening to what is going on in the solo.

Now that we’ve looked at structure, let’s go over the improvisation itself. As in other improv genres, it’s all about developing a “vocabulary”. Freedom of musical expression and flight of the soul, yes. But since rock improvisation is essentially a type of a language, understanding its principles and patterns will grow your expression.

Unlike jazz with its complex chromaticism, rock improvisation almost exclusively relies on diatonic phrasing, meaning using only notes from the scale.

Over the years rock musicians have gravitated to certain scales in order to construct their melodies. These scales have become so popular that it is impossible to imagine a rock song without them.

Minor Pentatonic – This one uses the 1st (the “tonic”), 3rd, 4th, 5th degrees of a minor scale and sounds like so:

Now let’s take a listen to some classic rock solo examples. We’ll discuss the rock improvisation techniques above and the other tricks being used by the musicians to create their distinctive rock solos.

Check this amazing guitar solo on “Child In Time” by Ritchie Blackmore. His solo starts at [3:57] with developing and repeating several motifs using the pentatonic scale. Another variation on a famous rock lick is at [4:41] and the one more to follow at [4:48]. A very common way to improvise a rock solo is by using triplets going up or down in a pentatonic scale. You can hear a lick like this at [5:08].

In our next example we’re going to be looking into expressive techniques. Intimate expression is a powerful tool in the hands of the improviser. Sometimes playing fewer notes but squeezing the most out of those few will bring much more excitement. With guitar solos this would be the use of note bends, vibratos, tremolos, glissandos, etc.

Here’s David Gilmour’s solo on “The Blue”. Pay attention to how he uses the whammy bar (also known as the tremolo arm) at [0:19]. On a synthesizer the pitch bend wheel achieves similar results. Jump to [0:58] to hear another commonly used phrase that starts with a slide and ends with a vibrato.

Rock pros practice these licks in all keys. This will help you know your instrument inside out, and have all sorts of fingerings in different registers at your command.

Rock solos rely almost exclusively on pentatonic scales and expressiveness. Listen to Eric Clapton’s solo on “Cocaine”. Clapton’s solo starts at [2:33] and it is a great display of contrasting registers to develop improvisational ideas. Starting at a fairly low register and then suddenly jumping to a higher one [2:43] brings a lot of excitement to the sound.

“While My Guitar Gently Weeps”

Here’s another fantastic solo by Prince on “While My Guitar Gently Weeps”. It is fair to say that rock improvisation vocabulary breaks down into a set of very common phrases and licks. This particular solo is a perfect example of this. The improv begins at [3:26] with a single note picked and bent for several bars until finally resolved using one of the most common rock guitar phrases ever around [3:36].

As another source for rock improvisation—and improvisation of any kind—is to outline the vocal melodies from the choruses, verses etc. Guitar phrases at [4:07 – 4:10] really complement the melodic content found previously in the song.

While many genres emphasize improvisation, none can match rock for its visual emphasis on showmanship. Watch a few rock solos—Prince’s solo above is a great example—and you will soon learn a variety of postures and “guitar faces” which mirror the musical vocabulary. The visual aspect is most effective when coupled with amazing music: showmanship can’t take so-so musicality skills to an iconic status, as countless air-guitarists will attest to.

Part of the magic of rock improvisation lies in how a relatively limited musical vocabulary becomes the vehicle for infinite expression. Know your blues, and study well your scales, expressive techniques and rock licks. You’ll then be ready to take your solo performance to the next level by telling your own story in the language of rock.