The 3 chords every musician should know 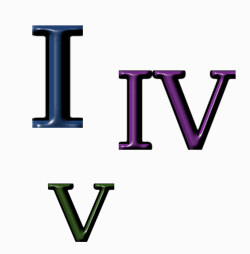 Learning about chords can be overwhelming.

Want to learn to play guitar? Trying to learn how to write pop songs? Need to analyse a 14th Century composition for music theory class? Understanding the world of chords is essential for all of these, but there’s so much to learn.

I’m going to share a particular way to look at chords which is simple – but actually provides the bulk of the understanding you’ll need to build these musical skills!

From the 24 major and minor chords, to all the variants (augmented, extended, and power chords, just to name a few types!), to knowing which can be used when according to complex rules of harmony… There is an awful lot to know about chords! But most of the music we listen to sounds so simple and so natural – surely things can’t be all that complicated?

It turns there are just three chords which are most important to any piece of music. If you want to really improve your music appreciation, learn about these 3 chords.

This lesson will discuss the I, IV and V chords and their importance in music.

Don’t be discouraged by the use of these strange symbols I, IV and V! If you’re not familiar with roman numerals, that’s just a way of writing “the one, four and five chords”. As you follow this article, just read I as “one”, IV as “four” and V as “five”.

We’ll use the famous song “Imagine” by John Lennon as our example of a I–V-IV (“one five four”) progression.

Whether you are just starting to explore music or have been playing an instrument for many years, you have surely heard or read about the I, IV and V chords. These chords are extensively talked about in music theory and for a very good reason; in short, they represent the fundamentals of classical and popular music.

These three chords are considered the backbone, or driving force behind many well-known pieces of music. In fact, there are a huge number of popular pieces of music which use only these three chords! You can buy whole books of 3 chord guitar songs, for example. This is why you should learn to recognise I, IV and V chords by ear.

Just one catch: You can’t directly hear a “I chord” or a “IV chord” – we do need to pick a key for our examples. We’ll use the key of C, which means our I, IV and V chords are C, F and G major respectively. Explanation below! For now, just take a listen to these three chords:

The one chord is also referred to as the ‘tonic’ chord. This chord will usually let you know what key a song is written in. As we said above, the I chord isn’t a particular chord; it depends on the tonality of a song. For example, if you wrote a song in the key of F, your I chord would be F. However, if your song is written in C, the I chord would be C.

Because the I chord matches the key, it is the most important of all the chords in that key, and the other chords used will all have a sound based on their relation to the I chord.

Listen to the example below, which is the chords to “Imagine” by John Lennon. Notice how each musical phrase starts with C and comes back to it. This is the I chord of the song!

The chord progression of ‘Imagine’

The IV chord will be a chord based on the fourth degree of your tonality. The term ‘degree’ just means where that note occurs in the key’s scale.

For example, in our example song above the I chord was C major. From the C major scale, we know the fourth note will be F. This means that the IV chord of this song is F major. Simple as that!

There’s another relationship here that is interesting to look at: because C is the fifth note in an F Major scale, if our key is F, then F becomes our I chord and C will be our V chord. This is actually one of the reasons that these two particular chords work so well together. We will learn later the dominance of the “V-I” sound, but in short: going from I to IV (e.g. C to F) is also using that particular dominance.

Because the tonic note of the I chord is one of the notes in the IV chord, it makes it very easy to go from IV to I or I to IV seamlessly in music. Having this note in common links the sound of the two chords. Listen again to the clip of Imagine above, and notice this time how the transition from the last chord (F or “IV“) back to the first (C or “I“) is pleasing to the ears and feels natural. 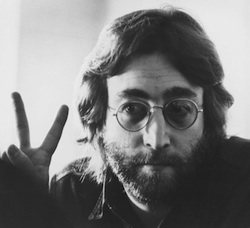 Hopefully now you’re getting the hang of this “degrees” idea. Have you already figured out why the V chord in the key of C is a G Major? It’s simply that G is the fifth note in the C major scale.

The V chord is often referred to as the ‘dominant’ chord, which is a good word for how it sounds: powerful, imposing. It creates a tension that forces the human ears to impatiently wait for a more relaxed tonic sound – such as IV or I.

Music is all about tension and release and the V chord is essential to create a tension. It gives a reason, or a way, to go back to the I chord naturally.

It is also used in many common chord progressions you’ll encounter such as “I–IV–V–I“, “vi-IV-I-V” and “ii–V–I“.

You will often find the V chord placed in front of the I or IV chord, since both of those chords feature the tonic note of the tonality. For example, let’s see how Imagine would sound if Lennon decided not to release back to the IV chord after using the V:

Not very convincing is it? This is because the V chord cannot stand on it’s own – it needs to release to a tonic sound!

In conclusion: the I, IV and V chords are the backbone of music composition. Popular songs such as “Imagine” will use those ear-pleasing chords as they form natural chord progressions which do not disturb the tonal aspect of listening to music. When you create or listen to music, pay attention to those three chords and you’ll soon realize that many of your favorite pieces were written around those three simple chords!

As I said at the beginning, there are a huge number of songs (in all genres) that rely exclusively on these three chords. Next time we’ll be looking at some of these popular three chord songs.