Recognize Intervals with Consonance and Dissonance

One helpful way you can learn to recognize intervals by ear is to take advantage of the difference between consonant and dissonant intervals. Consonance and Dissonance are vital concepts in music, and training your ear to distinguish between them will help you with interval recognition and much more.

For musicians, learning to recognize intervals is an essential part of developing their aural skills, and ultimately their overall musicianship. There are no shortage of different methodologies and mnemonic devices for learning intervals (such as using reference tunes to memorize the sounds). Their overall goal, however, is the same: to give you a set of tools to use to develop their ear to hear different sonorities as having unique qualities. In the end, a major third sounds like a major third, just as the color blue looks like the color blue!

In this article we will briefly review the naming convention for the most common intervals up to the octave. We will then think about an interval’s basic sound quality as falling into one of two categories: either consonant or dissonant. This is an important step for you to learn to recognize intervals.

You may recall that a musical interval measures the distance between any two pitches, whether played harmonically (notes together) or melodically (notes in a sequence). We measure that distance simply by counting letter names from the lower pitch to the higher one. In the example that follows, the interval C to F is a fourth, counting the C as “one”.

Intervals are named based on the number of notes they span

Because notes have sharp and flat variants, counting between letter names isn’t quite enough: we further refine the interval’s name by adding a quality to the interval. For our purposes here, we will limit our study to “perfect” unisons, fourths, fifths, and octaves, as well as the tritone (also known as a “diminished fifth” or “augmented fourth”). We will also look at major and minor seconds, thirds, sixths, and sevenths. The following example shows these intervals from C.

2. Example of intervals from C

Central to western music theory and ear training are the related concepts of consonance and dissonance. These ideas are extremely important to the way we hear music, both melodically and harmonically.

Consonance in music describes sounds that have a sense of rest. Parts of music which seem stable and don’t leave your ear wanting closure or relief are generally consonant sounds.

Dissonant sounds may be best described as “active” ones; they are not bad sounding (as is sometimes suggested). Rather, they are the sounds that create forward musical motion and harmonic direction. In western music dissonant sounds resolve to consonant ones. This is analogous to the rising tension and its eventual release in drama, such as a TV show or movie.

Listen to the following scale:

Removing the final note of a scale leaves dissonance

The final note of this scale, the B, sounds incomplete. it has a built-in tension to it; it sounds dissonant. It must resolve. Now play the C below. 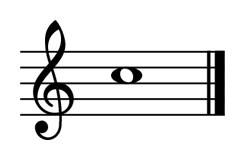 The final note can then resolve the dissonance, creating consonance

4. Add the final note for consonance

This C completes the scale: the dissonance of the B is resolved. Note: it is not that the note B is dissonant in itself, but only due to its context here as the “leading note” of a major scale. Hearing the scale establishes the key of C as the musical context in your ear (whether you realize it or not), and in that context the B creates a dissonance.

We can observe the same phenomenon with chord progressions: 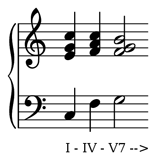 This chord progression is incomplete. The V7 chord has a sense of instability to it: it is dissonant in this context.

The dissonance can be resolved by the tonic chord

The C major chord above then completes that progression. It resolves the musical tension created by the V7 chord.

Back to our main subject: intervals. We can hear musical intervals as having varying degrees of consonance or dissonance. We can list the basic intervals from the most consonant to the most dissonant, and use this knowledge to help us learn their individual sound qualities.

The intervals which generally sound consonant (click to enlarge)

7. Listen to the consonant intervals

Now the dissonant ones:

The intervals which generally sound dissonant (click to enlarge)

8. Listen to the dissonant intervals

When trying to identify an interval, we can use its general quality of consonance or dissonance to narrow down the possibilities. Listen to each of the following intervals, deciding only whether the interval is consonant or dissonant. You can check your results at the end of this article.

9. Test yourself: Consonant or Dissonant?

Summary: How to Recognize Intervals with Consonance and Dissonance

Once we have determined whether an interval is consonant or dissonant, we can narrow down our choices even further:

You probably noticed that I started including some personal judgements above. This is because once you get beyond the broad guidance on the sounds of intervals it becomes quite subjective. The way to progress in your learning is to develop your personal appreciation of the sounds of these intervals, and find words or reference points which are meaningful and useful to you.

There are many ways to learn to identify intervals. We previously covered using the solfege system in our Pitch & Harmony series. One can also use example songs as reference points for ascending and descending intervals, or use instrument-specific techniques (such as knowing that piano keys are a minor second apart, or that violin strings are tuned in fifths, or these tips for guitar interval recognition).

Here we use the musical principles of consonance and dissonance to develop the ear’s ability to discern different intervals. This is a very useful and versatile way to think about what you’re hearing. If you have never thought about music in terms of consonance and dissonance before, you will open up a new way of hearing not just discrete elements like intervals – but all of music itself!