Let’s continue with our approach to ear training by learning to recognize intervals. So far you can sing and identify different scales, and have developed some familiarity with solfege. Now we can start to study interval recognition. This will be a brief but thorough tutorial. For more detail see our full guide on how to learn interval recognition.

Remember that a musical interval measures the distance between any two pitches, identifying both its size and quality. In this tutorial we will be working with intervals up to the fifth, and introduce the remaining ones.

We will begin with recognising major thirds. As you discovered at the end of the previous article, you can already produce a major third if you can sing a major scale. To review, the first and third scale degree of a major scale produces a major third. If you use solfege, the syllables are do and mi.

First, give yourself a starting pitch and sing: do re mi, the first three scale degrees of a major scale. Now sing the re silently: do (re) mi. Now just the major third: do mi. You can now sing the interval of a major third, and have a pretty good idea as to its sound quality.

The following exercise for learning to recognize intervals has five melodic major thirds. Play the whole example, first listening to the interval then singing in back in time. There will be a pause after each interval:

The next exercise uses the same five starting pitches as above, but now you should produce the interval yourself. Play the first note, sing it back, then immediately sing a major third above. You may wish to stop the player after each pitch sounds:

Major Thirds Exercise – do (re) mi

Tip: You can save the audio tracks to use on your computer or MP3-player, to practice with them whenever you like! If the audio players have an animated display, you can click the ‘download’ link to get the MP3. If not, right-click the link and choose ‘Save As…’ to save the MP3 to your computer.

You can practice recognizing intervals of a major third at your instrument as well using a similar process. Play random major thirds and sing them back. Try four or five at a time. Then play a random pitch, singing it back and a major third above it.

The next two exercises are similar to the previous ones. Sing back each minor third after you hear it:

Now match the given pitch and sing a minor third above it:

As before you should applying the above techniques at your instrument to help you recognize intervals by ear. At this point you should be practicing both major and minor thirds, as well as your scales.

If you have made it this far, its time to test your skills. The following excerpt has six melodic intervals, three major thirds, and three minor ones. Sing back each interval and try to identify its quality:

Once you are relatively comfortable with thirds, add in both major and minor seconds to your practice. You can sing major seconds with the syllables do re, the first two scale degrees of a major scale. Go ahead and practice major seconds at your instrument as we did with thirds, first playing and singing back the interval, then sing it given a starting pitch.

Minor seconds are the smallest interval, next to the unison. The syllables ti do work for this interval, the leading note to tonic in a major scale. Give yourself a starting pitch and sing a major scale. Then sing just the leading tone to the tonic, paying attention to its sound quality.

After you have spent some time with seconds try to identify whether the intervals in this next example are major or minor:

If you are still relatively new to ear training, you may notice that the ear gets confused if you try too hard, or for too long. This is quite common. Between scales, seconds, and thirds we have actually covered quite a bit of material!

You may wish to read on and continue to try the exercises that follow, but only work with scales, seconds, and thirds for the time being. 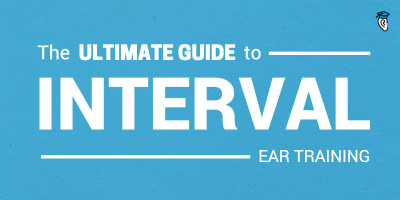 If you are looking for an in-depth guide to learning interval recognition, including what intervals are, how you can learn them step-by-step, and how to actually start using intervals in your real musical life, look no further than the Ultimate Guide to Interval Ear Training!

Remember that your skills will develop over time with regular practice. You can mark the next exercise as a kind of test. It contains ten intervals, including both seconds and thirds. You can turn it into two exercises. Play it through first just identifying each interval’s size. Play it through a second time, identifying both its size and quality:

7: Test yourself: Second or Third? Major or Minor?

Your next targets in learning to recognize intervals are the perfect ones: the unison, P4, P5, and P8. Both unisons and octaves use the same solfege: do do. For perfect fourths, you can use do fa, and for perfect fifths you can use do so.

We can generalize the process we used in learning seconds and thirds and apply them to fifths, as well as the remaining intervals First learn to produce the interval using solfege. Then:

1. Play and match the interval.
2. Sing it given a starting pitch
3. Identify it among a group of other intervals

Start with perfect fifth, then learn perfect fourths, and finally octaves. The unison probably will not need any work, but do add it into your exercises where you are identifying intervals.

The next two examples are for your testing purposes. This first one contains a series of perfect intervals:

This example contains seconds, thirds, and the perfect intervals:

The remaining intervals are sixths, sevenths and the tritone. Since we have a well developed system in place now, we can just present the solfege, and you can add them into your studies at your own pace:

We truly have covered a lot of ground in this article. Remember to take your time in developing your skills. A reasonable study plan is to begin by focusing on seconds, thirds, and the perfect intervals for a while before adding in the rest. In the next article we will work our way through triads.