The Practical Value of Music Theory 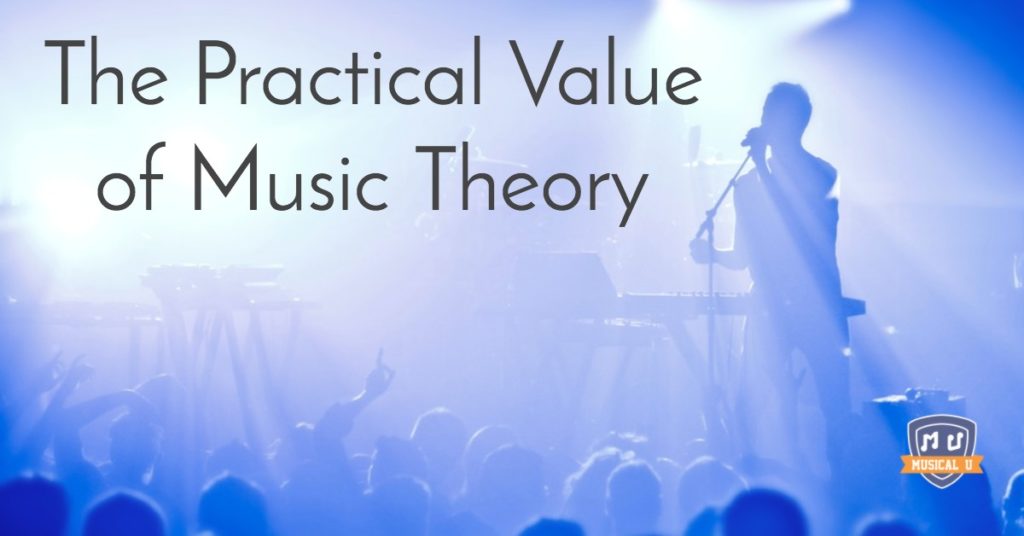 There’s some debate among modern musicians and songwriters about the value of learning music theory. At one extreme are those who feel that learning a set of “rules” will only limit their creativity, and at the other end are those who are truly interested in understanding how the parts of a musical piece work together.

Both extremes have some validity to their viewpoints, but they are extremes. Most people fall somewhere in the middle. They see the value in knowing more than they do, but may be intimidated by the topic or may not understand the way music theory enhances what they’re capable of as writers, players, or performers. So if this describes you, I hope this article lays out a strong case for an understanding of theory, with a few provisions.

Laws of Nature, Not Rules of the Road

First off, it’s important to understand that music theory is not a set of rules and regulations that must be followed like traffic laws.

Music has always come before the theory that explains it…the laws of music are more like laws of nature in that they explain the workings of a system that already exists.

Those who fear that learning “the rules” are going to limit them creatively don’t understand this important point. Theory is a way to explain how certain combinations of notes work together, and a method of identifying and categorizing different sounds. If you enter into the study of theory with this understanding, you won’t be limited by what you learn.

For every musical example that seems to break the rules, there’s an explanation that shows how that exception still follows the basic principles. So now that we’ve established that knowing music theory is not a constraint to your creativity, let’s look at how it helps!

How you use your theory knowledge may differ depending on your musical role: singer, instrumentalist, songwriter, composer or arranger. Many of us are all of the above, of course, or some combination. The information is the same, but the application may change.

For a performer, theory helps you learn and understand your music better. In the beginning, most of us learned by rote for the most part. Even if you were taking music lessons and were learning to read, there’s a good chance you still memorized your pieces. That’s a good thing in preparing for a performance, but many students memorize the movements and patterns more than the notes.

If you’ve ever had the experience of losing your place in the middle of a performance and had to go back to the beginning to be able to get through it, you’ve experienced the trap that this approach often leads to. It means that your body learned to make the gestures that create the sound, but your mind never really learned the music.

Knowing the theory shows you what you’re playing, not just how to play it, and puts the notes in a larger context. That information reinforces and strengthens your knowledge of the music, because you can remember a particular chord or sequence of harmonies instead of just a series of finger moves or vocal gestures.

For an improvising performer, knowledge of theory gives you an anchor and a starting point when your ear and intuition aren’t enough to show you where to go. In fairness, all great improvisers will tell you that at some point you need to forget the theory and just flow. I know I play better when I’m doing more listening than thinking.

But your ability to do that depends on how sophisticated your ear is, and how much you can intuitively grasp. In other words, understanding the theory gives you a set of tools to use when your natural gifts reach their limit. For Composers and Songwriters

For composers and songwriters, theory gives you a way to expand your musical range. If you find that you’re repeating yourself and all your songs sound the same, you’re probably relying on intuition that’s guiding you to the same place again and again. If you understand theory, you can make choices between multiple options. If the music is too predictable, you can immediately come up with alternative possibilities.

As a creative musician, you never want to lose the ability to explore freely, but as an educated creative musician you acquire tools to refine and develop the ideas your explorations reveal. Once again, the knowledge becomes a means to go beyond the limits of your innate abilities.

If you know that the first note of a melody is the third of the scale, you won’t have any trouble finding it once you know what a third sounds like. If you recognize the sound of an octave, you won’t have any difficulty hitting the second note of “Somewhere Over The Rainbow”. It’s extremely helpful when learning to sing complex melodies.

Some people are extremely gifted and can absorb and sing back almost anything on first hearing, but most of us take a bit longer. If you can identify the notes in the context of the key and also hear the intervals that make up the melody, that learning process happens much more quickly.

So it’s important to keep in mind that in order for your theory studies to lead to practical skills, there has to be an ear-training component as well. Knowing the mathematical relationships isn’t enough: you need to be able to hear them as well. Highly gifted musicians can hear these relationships easily, but most of us have to work at it. Theory provides the means to develop those aural skills.

Theory is also a means of communication. Musicians need to be able to talk to each other in a common language. If you’ve ever spent time working with self-taught musicians, or are one yourself, you may have had the frustrating experience of trying to teach or learn song and finding you’ve climbed the tower of Babel.

When everyone expresses the same idea a different way, communication becomes a slow and sometimes painful process. A common vocabulary makes it much easier to communicate effectively and efficiently, making rehearsals and performances much smoother.

So now that you know how and why theory is useful to you, let’s take a moment to look at the essentials you should know:

Knowing the notes of each key give you a foundation, and the option to remain solidly within the key (using only the notes of the scale). This also allows us to hear the function of notes that don’t belong to the key, since we can understand them according to their relationship to the notes that do.

If you know how to build a chord and relate it to a corresponding scale, you can manipulate any of the notes to form other chords. In other words, learning the formulas gives you a means to figure out the notes of a new chord rather than having to simply memorize every possible option.

The sound of each note of the scale according to its position in the sequence, and the corresponding chords. Again, this makes learning by ear or following “on the fly” much easier to do.

The ability to tell major from minor, or a dominant 7th from a diminished. It’s not nearly as hard as you might think, since each note of the scale and each type of chord do have an identifiable sound when you start to listen for it.

If you start with the basic understanding laid out in the beginning of this article and then proceed to fill in the specific pieces of information, I think you’ll find the study of theory very useful and immediately applicable. Remember, it breaks down to three big ideas:

1. Music theory is based on science, the principles of acoustics.
2. It names and categorizes sounds.
3. It shows the relationships between sounds.

That’s the core, and all the specifics—just fill in the pieces of the puzzle. No limitations, and no diversions into pure abstraction. Putting Together the Pieces of the Puzzle

There are many wonderful resources available to you to help you learn, Musical U being a very good place to start. As you proceed with your studies, though, keep this in mind: there’s a lot of information to absorb, and the larger connections probably won’t become clear for a while.

It’s like working a jigsaw puzzle in that you can’t see the picture until you have enough pieces in place. So recognize that the process will take time, and make sure that both your mind and ears are engaged!

You’ll find that your overall enjoyment of the music will increase as your knowledge grows. Your deeper understanding will reveal nuances you may not have heard otherwise. Your creative options will grow exponentially, and you’ll find you’re able to learn new music and communicate with others much more easily. It’s a great enhancement to your life as a musician, and knowledge that will inform your work for a lifetime. Dave Isaacs is a Nashville-based guitarist/vocalist, songwriter and educator with a nearly 30-year history as a performer and teacher. He teaches guitar and piano and coaches writers and performers from his Music Row studio, as well as leading workshops for songwriting organizations and festivals around the US.

He also designs and teaches online courses for the virtual guitar community JamPlay.com, and is a part-time instructor in the Audio Production program at the Art Institute of Tennessee – Nashville.