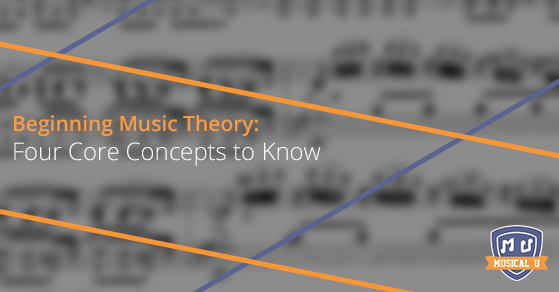 Music theory is an extremely important piece of the puzzle when it comes to understanding and playing music well, yet many musicians struggle to give it adequate time and attention. After all, making music and learning to play instruments is the fun part; why spend time worrying about the nitty-gritty details behind it?

Believe it or not, your level of understanding of music theory can make or break your ability to advance as a musician.

No matter how long you’ve been playing, learning music theory can help you seriously improve your skills and overall comprehension of music. With a little bit of time, dedication, and effort, you can use music theory to become the musician you’ve always wanted to be.

Fortunately learning music theory doesn’t need to be nearly as difficult as you might assume. Here’s what you need to know:

When you play the notes in that order, the note that comes after G will always be A again, but in a higher pitch. This higher A note belongs in a separate set (called an “octave”) than the notes before it. As you move forward through the alphabet, ending with G and moving on to the next A, you will move through higher and higher octaves, like going from the bottom end of a piano keyboard to the top. Check out our Pitch Training Modules for more help with this concept!

Although there are only 7 letters in the musical alphabet, there are actually 12 notes in total. How is this possible? The 7 letters – A through G – represent the 7 “natural” notes, but there are 5 additional notes that fall in between those letters. These are called either “flat” or “sharp” notes and each has a symbol: ♭ for “flat” and ♯ for “sharp”.

Now that you understand the musical alphabet, it’s time to put those letters together to create scales. Notes are the building blocks for creating scales, which are just a collection of notes in order of pitch. Easy, right?

There are different types of scales, but major scales are the most common. Major scales are created by arranging whole-steps and half-steps in a particular pattern.

As well as the common “major” scale there are also minor scales and pentatonic scales. Minor scales have a different pattern of half and whole steps and tend to give a sadder or gloomier musical feeling than major scales which sound bright and happy. Pentatonic scales are scales that have only 5 notes (so-called because “penta” is the Greek word for “five”!)

Whenever 3 or more notes are heard together as one sound, it is called a “chord”. Chords are what give songs their moods and feelings. For example, the chord called “C Major” is a combination of the notes C, E, and G.

Triads are the most common types of chords and have three notes. There are four types of triads: major, minor, augmented, and diminished, though major and minor are by far the most common. To learn more about chords you can explore our Chord Training Modules.

There are two ways to play an interval, called “melodic” and “harmonic.” Melodic intervals are when you play one note and then the other afterwards. Harmonic intervals are when you play both notes at the same time. Recognizing intervals is a key part of developing your ear for music, powering skills like playing by ear, improvising and composing. For more on this see the Interval Training Modules of Musical U.

While learning music theory may sound difficult and scary, once you’ve got the hang of it, it has the potential to completely transform the way you understand and play your instrument. The more you know about how the mechanics work, the better you’ll be at reading, writing, and making music.

Want to learn more about music theory and how it can help you gain freedom and confidence as a musician? Get full access to dozens of training modules, a friendly supportive community and access to personal expert help when you join Musical U today!