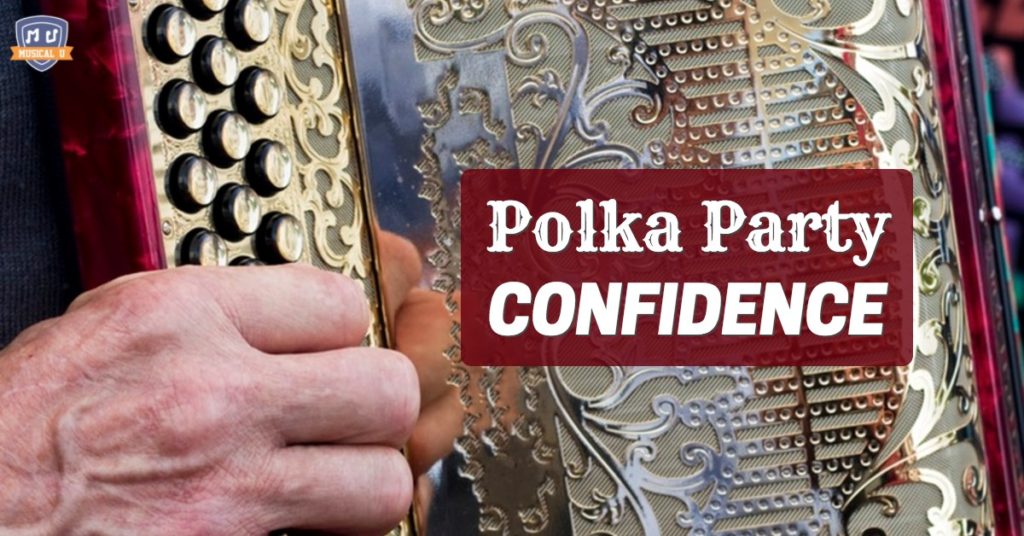 I said “Yes” to the gig. Though I’ve been playing with the accordion for a while, I haven’t had much polka experience. But I had two weeks to prepare and I knew that somewhere I had a polka book packed away. Little did I know that my musical confidence was about to be sorely tested… again!

You would think that after playing music for 52 years I would be well over those confidence issues! Recently I decided to fess up, and posted this story on the Musical U discussion for the Get Confident module. I found out that I am not alone.

First, I dug out the polka book and started practicing – the book was full of wonderful pro arrangements, many of them four and five pages long. Page turns are not an accordion player’s best friend. I copied them all out on cardstock, taped them together and put a board across my music stand as an extension. It looked dorky, but I figured it was better than spending all my gig money on a page turn pedal for my iPad.

I was loving the new bass runs I was learning from the arrangements, but there was no time to really master them, so I began simplifying, trying not to look at the bass clef staff and just play a basic oompah with the chords. This was a dance, and the rhythm had to be strong. 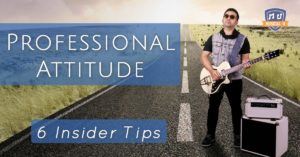 I had a good strategy, and then the dominoes started to fall – in the wrong direction. One vehicle breakdown after another began sucking up my valuable practice time. I could hear Stew’s voice reminding me of the importance to a working musician of a professional attitude (and a working vehicle!).

I tried to visualize myself feeling confident and flowing, keeping the beat going strong, drawing from my inner resources and decades of musical experience to pull off a miracle.

But the words of my client kept haunting me: her grandparents, the honored guests, were “professional polka dancers.” Who was I kidding? They must have been dancing to veteran accordion players all their lives and here I was going to pull it off with just two weeks of spotty, interrupted practice.

Every time I tried to visualize everything going well, I kept seeing crash and burn instead. So the day of the gig, I decided to surrender. I had an hour’s drive to the gig after my day of teaching in which to listen to the radio, breathe, and drink water. 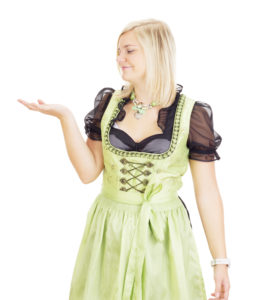 I pulled up to a smallish suburban house, and was greeted at the door by bubbly 20-somethings decked out in full Oktoberfest garb. I could hear the sound of the polka CDs rising up from the basement. When I went down the stairs, I could see that those were no CDs: an elderly woman was jamming out on a beautiful ornate German button box accompanied by her husband on guitar and chromatic harmonica.

I fought back the tide of doom as I set up. I encouraged them to play another, and eased myself in by playing along by ear.

Perhaps I wasn’t as clueless as I thought?

The couple left the stage and I took over.

Thankfully, the sounds of the party covered my stumbles. I just kept the rhythm pumping. There wasn’t nearly as much dancing as the client had led me to expect, so I could fade into the corner a bit. Well, as much as a red Scandalli accordion can fade into the corner of a sound-filled room with a solid tile floor! 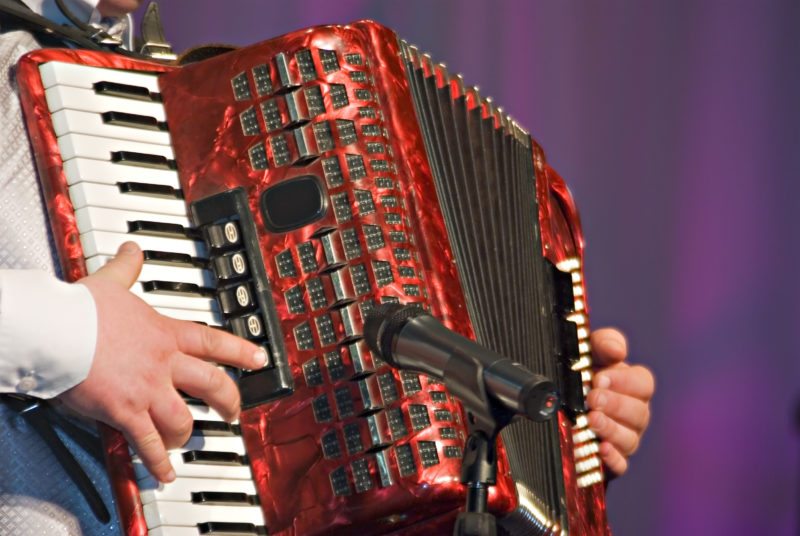 Are we having fun yet?

Before too long, the older gentleman returned and started playing guitar with me. He was a wonderful rhythm guitar player, big thick “orchestra chords”, and he kept the tempos down. He was the “professional polka dancer” and I was grateful that I didn’t have to play as fast as I thought. Plus his rhythm covered my left hand a bit and I could focus on the melodies.

The best part was that after each song he leaned back in his chair and exclaimed, “Oh-hoh!”

Yes, this was starting to be fun.

I was really curious about the button box, though. I invited his wife to join us. We played another one while she set up. Then she asked me if I knew a “Schottische” (pronounced “Shahdish”).

Oh no. Her daughter had specifically asked me to bring some Schottische. Well, I had been desperately searching for some free Schottische sheet music online – there was a wide variety of answers and genres that popped up but not any really decent scores to go by – so I thought that whatever I picked would be wrong.

I guess I would just have to sit this one out…

Well she launched into this old German tune that I actually knew quite well by ear. And it was a blast to play. I could take my nose out of my scores and look around a bit. I wanted to see how she worked the button accordion.

As I looked more closely, I could see that her left hand wasn’t squeezing any buttons. Odd, I thought I could hear her rhythm pumping away. Then she waved at me with her right hand. Wait a second, what’s going on here? Some kind of witchcraft?

She looked at me with a twinkle in her eye and laughed out loud.

That was no ordinary accordion! After the tune was done, she showed me that the button box actually had a programmable chip in it. Real reeds, real bellows, but the box played itself like a player piano.

That was my competition!

We all had a good laugh, and played together the rest of the evening. After some lovely conversation and lots more Oh-hoh’s, I packed up, was paid with an additional sizable tip, and headed home.

In the car I had a good laugh at myself and wondered: After more than a half century in music, will I ever stop being nervous about a gig?

Am I the only one that goes through this? Thankfully, I am not alone. When I posted this confession on Musical U’s “Get Confident” discussion, I was surprised by the warm response and support of my fellow members.

And by writing the story out and sharing it with others, I could see that I had taken some real steps forward in learning about confidence: being resourceful in my preparation, surrendering to the experience of the moment, being open to friendly relationships with my clients, and – most of all – keeping my sense of humor.