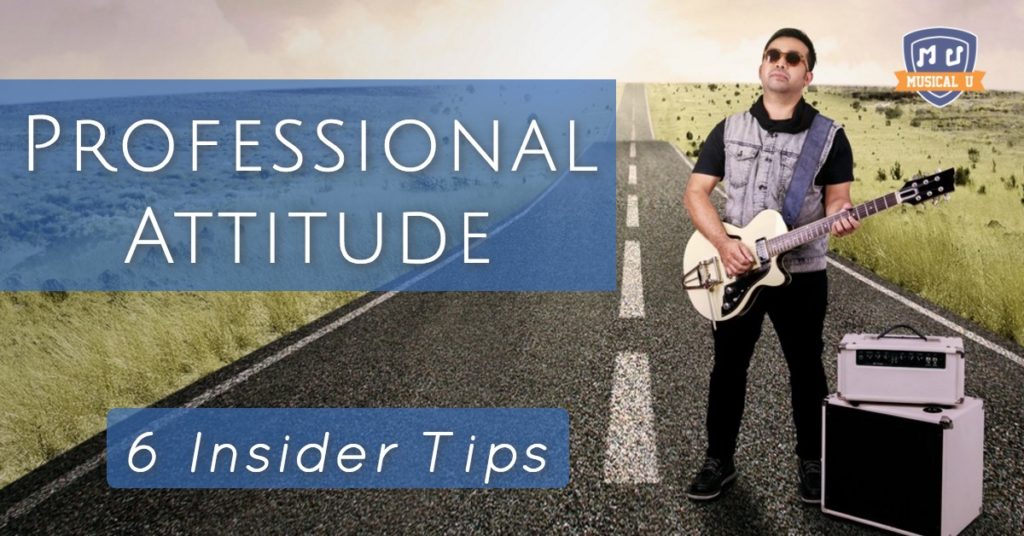 You’ve put in the time: years of practicing, lessons, and expanding your musical gifts. You bought good equipment, and you know how to listen and play as a unit with others. Now you want to come out of the practice room and play in a band—and even make some money doing it.

But are you really ready for that next step? Once you step beyond that garage door, here are six insider tips that have nothing to do with your musicality which will make you a valuable asset to any band or artist who seeks you and your skills.

Don’t depend on others for transportation or even equipment. This may seem like an easy one but you’d be surprised!

Yes, your car is a crucial piece of musical equipment.

Even older, experienced players may not have reliable transportation and end up depending on others to get them to a rehearsal or show.  Eventually, transportation problems can be like a dark cloud over you. Of course, vehicles do break down. If you know there is an issue don’t wait until one hour before a show or a rehearsal to call someone.

Real-life example: The drummer in my band was notorious for last minute calls that his van had broken down—when actually it had been down for days. That meant one of us had to jump go pick him up for the gig.

Make sure that you have your own equipment and that it works.  I have heard stories of people looking for a drummer or guitarist.  The phone chat goes good, seems like they have the experience.  Then when they get to scheduling an audition they ask if you have a drum set, or even if you have a guitar for them.  That should never happen.  And don’t forget your accessories—strings, batteries, cables, picks, batteries, drumheads, drumsticks, batteries, and batteries.

And speaking of personal…

Always be prepared to stay the night somewhere—toiletries, medications, change of clothes, etc. You never know when a “three-hour tour” is going to turn into an expedition.

Seems simple but at times it isn’t. Even others have been late, that doesn’t mean you have freedom to do so. Be on time and, most importantly, embrace the habit of being early. In fact, try your best to be the first one there.

If you are late, call as soon as you can and apologize and do all you can to better the situation.

Real-life example: We’re all set up waiting on the drummer. We call and he says he is on the way. We are now 15 minutes pre-show. He arrives with 10 minutes to set up his drums and to get a sound check. So during the first songs I am trying to play guitar and get the sound mix good at the same time. This was not the first time either—when he left the group it was a party day for me!

Mark up your calendar with show dates, rehearsal dates, day-job hours, time off, and vacations. Verbalize it with your bandmates or musical employer. They are booking shows, and may be relying on you for their household income. If you are not responsible for your own time and calendar it will effect the others who are depending on you. Be honest and upfront about your schedule.

Real-life example: we’re at show, everything unloaded, and ready to go on stage. The group we were opening for was looking for a good original act to tour with their Doors tribute band. The problem? Our drummer (yes, the drummer) was a no-show. We called and called with no answer. Eventually he called back. Turned out he was on a camping trip with his daughter and didn’t have the show in his calendar—even though we had practiced just two days earlier specifically for this gig. Needless to say, we weren’t called to do any more shows with the tribute band.

Look, I’m not trying to pick on drummers. Really I’m not! This could apply to anybody.

3. Be a team player—no drama, please! For example, if your band vehicle breaks down on the road, do what you can to help (if you can) or be quiet and understanding. Nobody really wanted this in the first place. Moaning and complaining takes a bad situation and makes it worse.

Let’s say the issue is financial. Don’t wait until the date of the gig before you work it out with the band leader.

Real-life example: I know a story of two hired musicians blackmailing the singer minutes before the show because they wanted more money. That doesn’t make for a very harmonious musical experience! Probably had an extreme effect on their future employability as well. If that thought ever crosses your mind, just repeat these words: “Satan, get thee behind me!“

Venues change. Transportation problems. Hotel problems. Sound and technical problems. Sets get lengthened or shortened. In short, anything can happen and those who are successful have a “can-do” problem-solving approach to the inevitable issues on a gig. Don’t complain, just think fast and take care of business.

4. Treat others as you would want to be treated

If you want respect, show respect. The classic golden rule scenario for most shows is how you treat the sound and lighting crews. Be friends with them. Treat them good, be gracious and polite. They have a very hard job that gets little to no respect. Whether you treat them good or ill, they will remember you. If they remember you for good, you will receive more cooperation and better results from them, and your reputation will precede you with other venues.

No matter how great you are there is no need to conduct yourself with the attitude of “I deserve”. Most venues, sound and light crews, audiences, and booking agents have seen quite a few amazing performers and artists. Don’t become this story: “This artist was amazing—until I met them.” Be kind, be friendly, treat each person as if they are key to your success—because, in reality, they are.  Shake hands, say “Thank you”, “Please,” and more.

Real-life example: At every show, the group I was playing with always intentionally established a good relationship with the sound and light crew.  We had more than one crew tell us how much they liked working with us. Then they would go on about how much some other bands would make their job 10 times more stressful. That really gave me a window into their world and a greater appreciation for all they do to make the music sound great. 5. Keep your vices at home

When you are on a gig, and even when en route, you’re not on vacation: you are on the job.  Make sure you are in control of your actions and words, and that they aren’t “influenced” by outside substances.  Whether you’re the main performer, or working for someone else, you are essentially representing something that you are trying to market. The music isn’t the only thing people are watching.

Real-life example: A band that I know was playing a pretty large gig.  They were in the green room, and the guitar player pulled out some illegal drugs. This can result in getting booted from a show and/or also blacklisted—if not a police record. The other players were not happy. Keep the vices at home.

6. Remember who you are

Band life exists in a space all its own. While the hypnotic swirl of stage lights and late nights—and great music, of course—may be very engaging, it’s not the whole world.

Remember your family. You’re not doing anybody any favors by using your music career to avoid obligations at home. Eventually, it will all catch up with you, and it will mess with your music. When you keep your house in order, your professional life will have a strong foundation to stand on. And you’ll have some place to come home to when the music’s over.

News flash: nobody’s perfect. Take responsibility for things you have done. Did you mess up? Apologize and move forward. If you know something is wrong, and it is your fault, don’t shift the blame. Own it and do what you can do correct it.

All these are great traits to have in any life situation. And like music, the more you practice them, the easier and more effortless they become. So when you’re ready to make that move out of the garage and onto the stage, remember to grab some fresh batteries, check your calendar, put gas in the tank, polish off that golden rule, and take along a hefty helping of positive attitude—and don’t forget your toothbrush!