Open Your Ears to Latin Pop 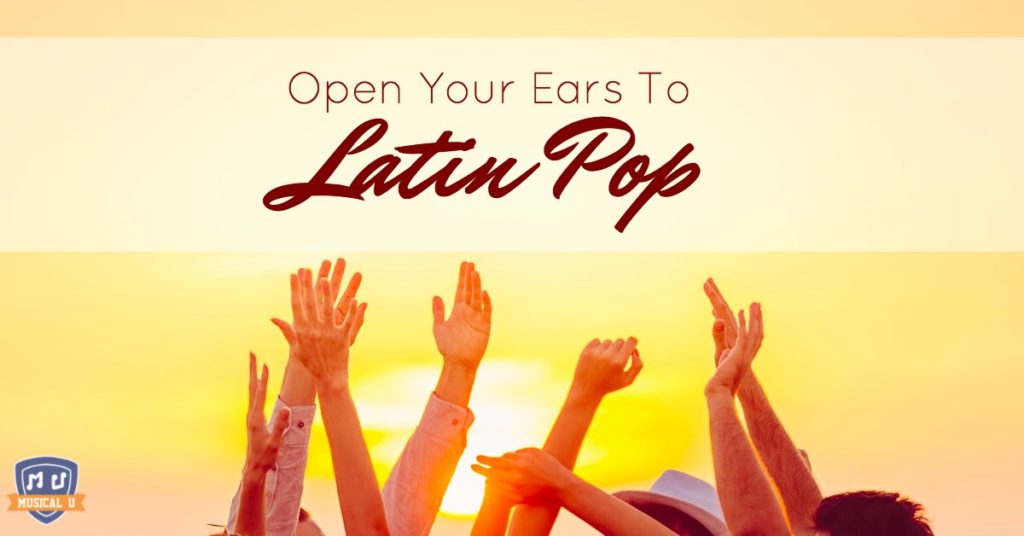 From the hip-shaking Shakira to the romantic crooning of Enrique Iglesias, Latin pop music, or Pop Latino, infiltrates every stratum of our world: the World Cup, Zumba classes, movies, romantic dinners…

In our previous article, Open Your Ears to Traditional Latin Music, you learned about traditional Latin dances like salsa, tango, and samba, and the music that accompanies them. Latin pop music today brings a new spin to centuries of traditional music, adding in contemporary electronic dance music beats, synthesis, and a lively pop music sound.

From New York to Mexico, Latin pop music exploded onto the scene in the 1990s, but its exciting dance rhythms and catchy hooks can be traced back to the smooth romantic ballads of forerunners like Julio Iglesias and Sergio Mendes. Latino millennials today can remember their abuelas swooning over the sexy Iglesias, who always made you feel as if he was personally addressing you when he spoke of sensual love and romance:

Earlier Latin love ballads incorporated the familiar musical sounds of the 1960s and 1970s, but added a unique Latin touch, with light Latin rhythms and percussion and Spanish lyrics that glorified eternal love and heartbreak. Some well-known artists are Julio Iglesias, Sergio Mendes, and Roberto Carlos.

Born in Havana, Cuba, Gloria Estefan’s rise to worldwide fame mirrors the hopes and dreams of the Cuban exiles after Castro’s revolution left many fleeing their homeland because of political persecution. Many came to the United States hoping for freedom and a better life for their children and grandchildren.

Estefan’s journey from humble beginnings to pop diva showed that the United States was truly the land of opportunity. A bus accident severely injured Estefan’s back, preventing her from dancing to her own music, but the dance diva continued on. Estefan’s hit songs “Conga” and the “Rhythm is Gonna Get You” have become iconic in pop music. Her music often has playful lyrics accompanied by strong Latin rhythms and percussion. She paved the way for artists like Ricky Martin and Shakira, who took dance clubs by storm.

Another Latina, the talented Mexican-American singer simply known as Selena, had just begun to make waves in the United States when her life was cut tragically short by a former employee. Despite her early death, Selena had become a Latin icon with her albums Entre a Mi Mundo and Amor Prohibido. She is often credited for bringing Tejano music, a complex blend of Mexican traditional music found in southern Texas, to international fame.

Selena has posthumously sold tens of millions of albums, and her legacy is kept alive with the film Selena, showcasing the acting talents of Jennifer Lopez, a Latina music icon in her own right.

There are a few key musical elements that you will find in Latin pop music. While the genre spans artists from almost every corner of the world, Latin pop has several distinctive hallmarks that distinguish it from other popular musical styles.

Latin pop music stems from the rich musical histories of the artists. Whether the music is derived from salsa, bossa nova, tango, or Tejano, strains of centuries of music passed down from generation to generation are recognizable in the genre.

Listen to Cuban-American rapper Pitbull’s “We are One (Ole Ola)”, which was the 2014 FIFA World Cup Song, and see if you can spot his influences:

Even English-version Latin pop songs have a smattering of Spanglish (Spanish + English), Portuguese, or even African dialects. For example, Shakira’s famous song “Waka Waka (This Time For Africa)”, performed at the 2010 FIFA World Cup, can be found in several languages, and was adapted from a traditional military song from Cameroon.

This global approach to music has helped make Latin pop music more than a provincial genre. Many of the most popular songs are sung in Spanish or Portuguese but still maintain international popularity.

In Puerto Rican Elvis Crespo’s “Suavemente” you can hear the many complex rhythms of the percussion following a catchy electronic dance beat in the NYC Remix version. The original “Suavemente” has a Dominican merengue beat.

Compare the traditional version to the NYC Remix version. While you listen, think of the following:

A Contemporary Celebration of the Past

Latin pop music has grown to become an international phenomenon, blending the rich traditions of Latin music with contemporary pop to create tunes that recall the past while embracing modernity.

Take the time to listen to genre superstars like Shakira, Ricky Martin, Jennifer Lopez, Pitbull, Jennifer Lopez, and Gloria Estefan, seeing if you can hear which Latin music traditions influenced their sound. Invite a friend or two or three over and enjoy shaking to the rhythm of Latin pop!