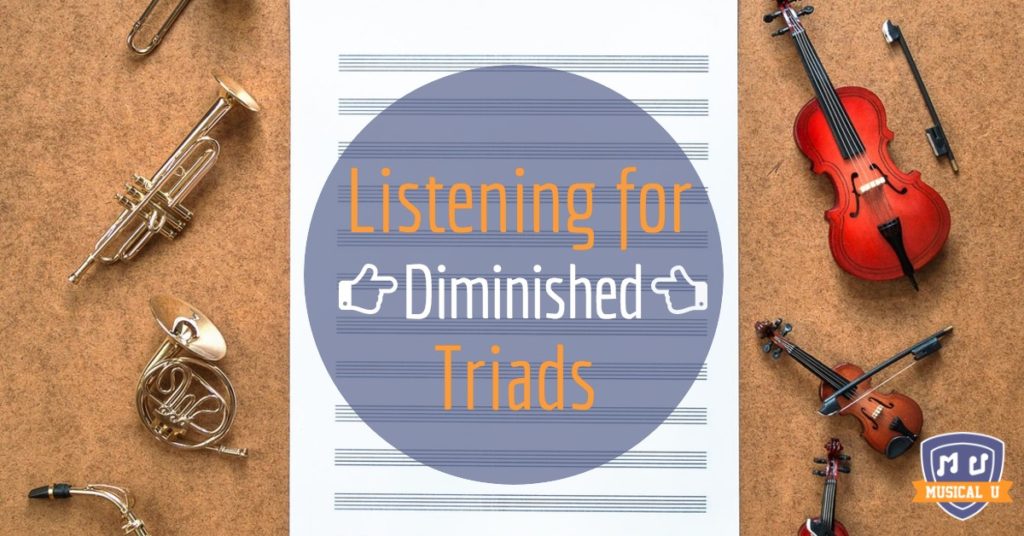 Maybe you are listening to your favorite band playing a tune on the radio, jamming out with your heavy metal band, or just trying to figure out what chords work underneath the saxophonist’s jazzy riff, when suddenly you hear a chord that’s not quite a minor chord. What could it be?

Well, it might just be a diminished triad. Though it’s a close cousin to the minor chord, as we’re about to see, there’s a key difference.

For example, in Garth Brooks’ tune “I’ve Got Friends in Low Places”, Brooks opens up the song with four arpeggiated chords. Can you pick out the diminished chord?

Give it a listen:

Don’t worry if it’s a little difficult to do at first. Many musicians struggle with hearing chords, while others seem to have some bizarre sixth sense when it comes to chord recognition. Often this depends on your main instrument.

Drummers, singers, and other musicians who do not play harmonic instruments like the piano may have a tougher time hearing diminished chords. However, by training your ear, you’ll be able to acquire this skill in no time!

Even if you are piano player that needs a little help with harmonizing or a violinist that wants to work on your musicality, you can learn something new about diminished chords. So read on!

What is a Diminished Chord?

A diminished chord is a chord that is built by placing two minor third intervals on top of each other. For example, C, E Flat, and G Flat make a C Diminished Chord.

Does this seem a little confusing? Then let’s break it down!

The interval of a third in C minor looks like this:

To build a diminished chord, simply stack thirds on top of each other like this: 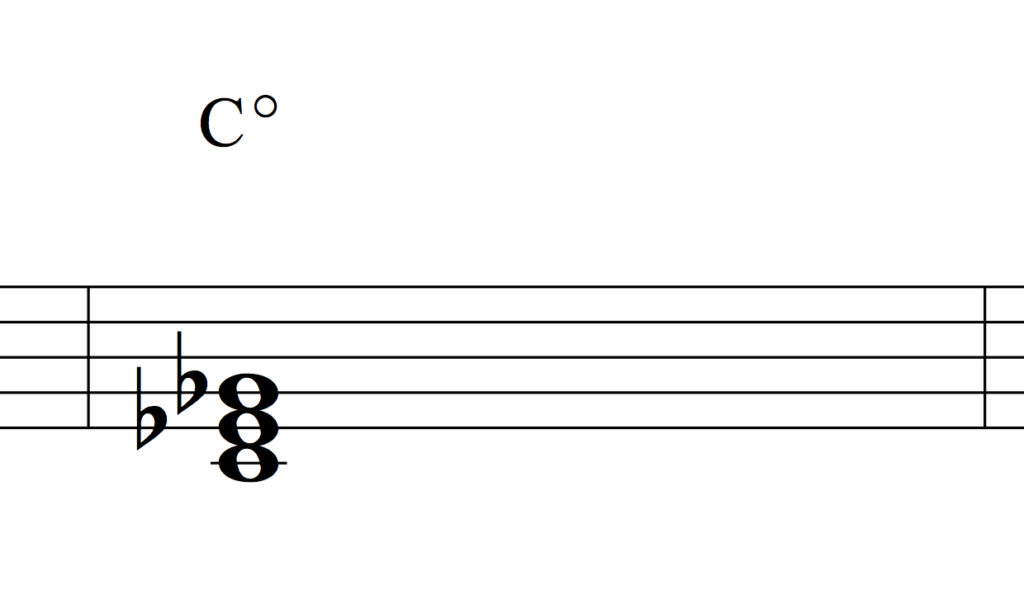 Compare how the diminished chord sounds compared to the C Major chord and C Minor chord:

Can you hear the subtle differences? We will talk about this a little bit more in a minute. First, let’s listen to some diminished chords in some classics. Immediately, you will be able to sense the very different chord quality in the music that is so different from most standard pop tunes you might hear on the radio today.

Listen for the added tension introduced by the diminished chord in this minor chord progression.

And in Paul Young’s “Every Time You Go Away”, the diminished chord at [0:57] raises the emotional bar as the song moves to the chorus:

Even popular songs from famous Disney films include diminished chords. Listen for a passing diminished moment [0:25] adding emotional color to the classic opening melody in “When You Wish Upon A Star”, sung by Lexi Walker:

How to Recognize Diminished Chords

If you have a really good ear, you might be able to train your ears to hear the diminished chord by simple ear training. You listen to the chord over and over again until you have essentially memorized how the chord sounds in comparison to other chords.

There are many ways to do this, and some are easier than others, but the simplest is to repeatedly play the diminished chord, then combine it with one or two other chords. By comparing these chords, you eventually train your ear to recognize the diminished chord immediately.

Many pianists and guitarists learn chords this way because they play chords all the time in music. Melodic and rhythmic musicians, however, might find this difficult.

2. Now, try to pick out the sound of the diminished chord in this chord progression with your eyes closed.

Which chords were diminished? Listen again and jot down your answers.

3. Check your answer below:

Another way to recognize diminished chords is to use arpeggiation. In arpeggiation, you will break up the chord into its individual notes and essentially sing the intervals.

For example, if you heard the G diminished chord, you will break it up into three notes, or two minor third intervals. Listen to the example below:

This method takes some practice and concentration. To successfully do this:

Singers may find that audiation (being able to sing a tone after the tone is no longer present) is easier than other methods because they develop musicianship through solfege, a helpful technique to help you recognize pitches.

Both learning by rote and by arpeggiation may take a long time to develop, and these are skills you will learn over time as you develop your musicianship.

Let’s look at a third way, which is a simpler way to start learning how to listen for diminished chords. In fact, many musicians start with this simple method and then integrate other methods as they develop musicality.

Chord quality is essentially how the chord sounds in terms of feeling, tone, and even color. Many beginning musicians and music professionals use chord quality to “hear” which chord is which. If you find it too difficult to arpeggiate or do not play a harmonic instrument, then you might find this to be the simplest way to distinguish one chord from another.

For example, when you listen to a major chord, it often sounds cheerful:

The Axis of Awesome compiled a list of about fifty songs that use the basic I-V-vi-IV pop chord progression. After a while, you will probably get the hint, but I suggest listening to the entire arrangement to truly internalize the power of positive major chord progressions (and to also notice how far back this popular chord progression goes!):

Notice how most of these songs have an overall “positive” tone, sometimes being outright peppy and cheerful, even when the lyrics are not the happiest.

A minor chord has a “sad” tonal quality. It is morose, serious, and sometimes tearful. Compare the Beatles’ “Yesterday” to the major songs before. You can feel the sadness dripping from each word. The combination of minor chords and sorrowful lyrics make for a song that pierces the soul:

Comparing the overall tonal color of the minor chord to a major chord is like comparing night and day.

Check out these two versions of the same popular Justin Bieber song “Love Yourself”. The first version is in a major key with mostly major chords.

Here’s the song in the original key:

The second is in minor and is clearly much different in tone:

The two examples are very different. In the original, there is a happy feeling to the song. In the second rendition, you feel like the song has taken a dark, dangerous turn.

On to Diminished Chords!

Now that we have chatted about minor chords versus major chords, we can talk about diminished chords. Because the diminished chord is essentially a minor chord with a flat fifth, it takes the moroseness to an edgy and distinct eleven.

And here is the minor chords vs. the diminished chord:

Paul McCartney has a way of making diminished chords sound beautiful and breezy:

The song starts at about [0:55] if you want to skip the chatter. Here’s the chord progression in the verse:

He sits on the A♭dim7 for a full measure. Then the F dim7 goes by pretty quickly, just two beats.

While in many cases you will hear the diminished chord with an added seventh. Since the diminished seventh just adds another minor third on top – which in turn is a minor third below the root – the seventh doesn’t do much to change the chord quality.

Check out Musical U’s guide to working with seventh chords, including diminished sevenths, for more information!

A Bit of Listening Practice

Now that you’re familiar with how diminished chords are built and what they sound like in isolation, it’s time to put your ears to the test with some listening exercises.

Exercise 1: Listen for the diminished triads

In this exercise, you are going to hear different examples of chord progressions based on the tracks we listened to earlier. As you listen, write down which chords are diminished. The answer key is found below. 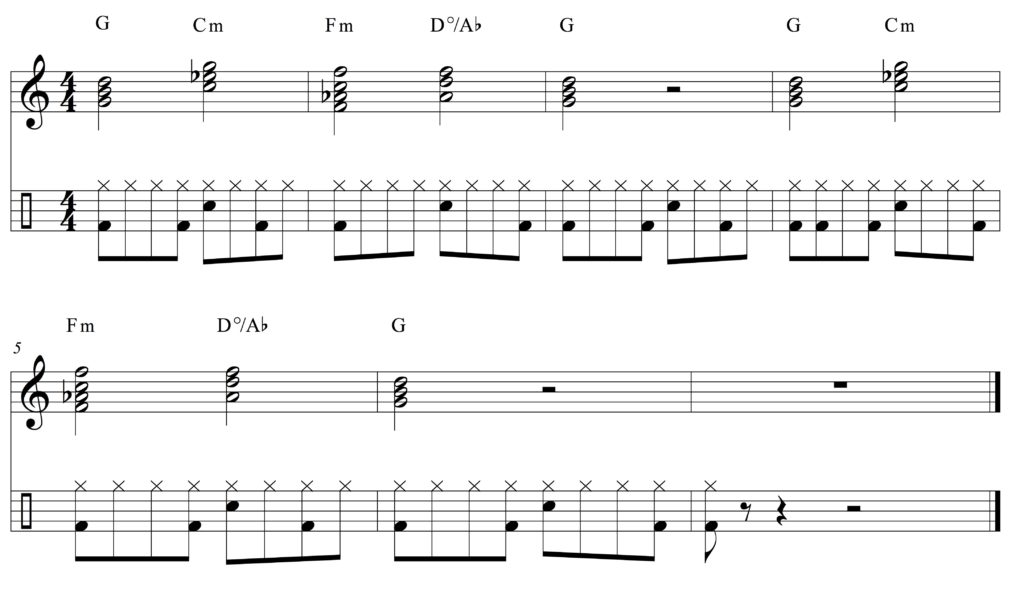 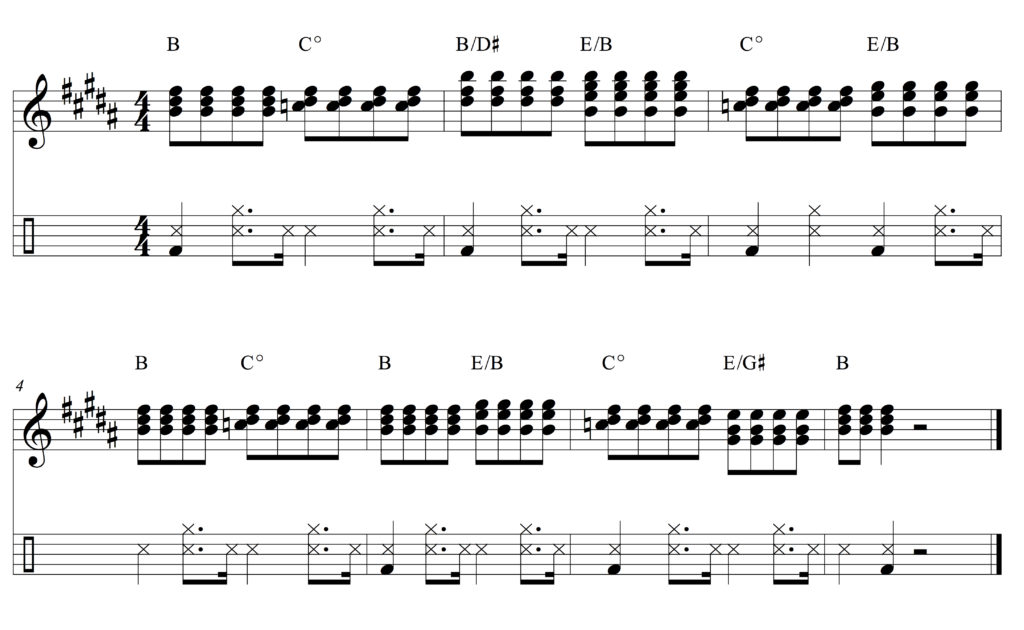 Here is a great breakdown of a famous song, Mariah Carey’s “All I Want for Christmas Is You” which makes use of several chords, including a special kind of diminished chord (a.k.a. min 7♭5 or “half-diminished”). This video breaks down why Mariah Carey’s song sounds so “Christmassy”, but also discusses the use of the diminished chord in the song’s main chord progressions, while also linking it to previous famous holiday songs.

Want to read all about it? Slate.com explains the Christmassy element of Mariah’s hit by relating it to old Christmas standards and their jazz origins!

Take the time to practice playing the chord progressions based on these two popular tunes. The more you practice, the easier it will be for you to listen for diminished chords. For an extra challenge, play the chords for a friend and practice testing each other’s ability to pick out diminished triads.

Exercise 2: Which song has diminished chords?

In this listening exercise you will compare two different popular songs. Select which song has diminished chords. The answer is below.

Answer to Exercise 2: “Somewhere Over the Rainbow” has diminished chords.

Bonus: Where do you find the most prominent diminished chord?

Feel a little more comfortable picking out the diminished triad from other chords like major and minor chords? Come back to this article to practice listening. Below is a short song list of songs that include diminished chords. You can find the chord charts for these songs online and play along with the original recordings: