Home » How To » Active Listening » Listen Close: "Turnin’ on the Screw" by Queens of the Stone Age

Listen Close: "Turnin’ on the Screw" by Queens of the Stone Age 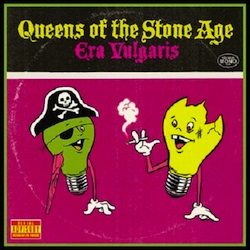 Recent talk of the possibility of a new Queens of the Stone Age album before the end of 2011 has me certifiably giddy. I’m a big fan of lead-Queen Josh Homme’s side project Them Crooked Vultures, and their 2009 self-titled LP spent some serious time on my turntable. So, I suppose that has helped to tide me over.

But the Queens were so prolific for so long – they never went more than about two years between albums since they released their debut – that I’ve been hardwired to expect new music from them on a consistent basis. Now it’s been four years since they dropped their last LP, Era Vulgaris, and I’m going through withdrawals. 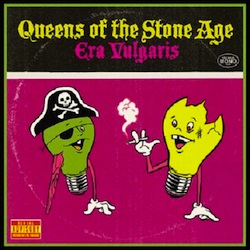 So maybe that’s why I’ve been obsessively rediscovering Era Vulgaris so much as of late. When the album came out in 2007, I listened to it quite a bit, but for one reason or another I never fully gave myself over to it. I liked it a lot; I just didn’t leave it in my car stereo for a year straight.

Fast-forward to 2011, and it’s one of the three albums I need to have within arm’s reach while I’m driving, lest I feel uneasy. I need to know I can reach for it, find it, and have it tunneling itself into my ear holes within seconds of the need arising. (I have it on my iPod, but I keep a CD copy on hand just in case. It’s a sad state of affairs.)

In large part, this is due to my seemingly unending love for the first track on the album, the densely layered – and awesomely unconventional – “Turnin’ On the Screw”. I don’t want to say that it’s radically unlike any other Queens of the Stone Age song, because the band has a history of exploring way more sonic ground than they’ve ever received credit for, and it’s not like this tune suddenly finds them unrecognizably genre-switching. It’s clearly Queens of the Stone Age.

Queens of the Stone Age – Turnin’ on the Screw

But there’s something gut-wrenchingly exciting about it, and it seems to stem from the band consciously exiting their comfort zone.

The reason I want to talk about it here is that, while it’s on the most base level a bludgeoning rock song, it’s also a track that demands to be listened to on headphones so you can really appreciate how well the band uses stereo mixing to add incredible texture to its many different sections.

The percussion that starts the song is a prime example. A shaker (can anyone identify it specifically?) begins in the right channel, and is quickly joined by a metal-brush-type element off in the distance on the left. The main drums burst into the middle – slightly distorted and with what sounds like a tambourine clipped to the top of the hi-hat.

The resulting sound is both thunderous and precise, and though the initial crunch is somewhat rigid, there’s also a certain warmth to it. The way the drums and percussion blend together fills the space nicely.

A buzzy keyboard juts in next, pressing out a few notes before a guitar scrapes in towards the left channel and eventually leads the bass and other guitar to charge when the track officially explodes into action.

The resulting sound is a little hard to decipher at times, but if you listen close you can still hear the keyboard buzzing (higher now) in the right channel, as the bass (near the middle) dances around it, both lending themselves to a tone that gives the song an underlying drone which plays nicely off the stop-and-start approach the guitars are taking. 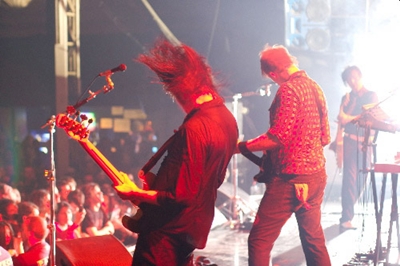 I don’t want to get too much into the songwriting side of this track, but it is notable that this track is five minutes long yet contains no clear chorus. There is definitely structure to the way the verses begin and end, but this lack of refrain opens the song up, allowing the band to freely add in solos and other sections. After the first verse (at about the 1:46 mark), there is a quick and chaotic bit of left-to-right panning that feels at first like phasing, but is really much more clear-cut and aggressive than that:

When the song slides back into the groove, you get the sense that that was just a quick taste of something that will later be fully realized.

And sure enough, it is. After the second verse, there’s an almost two-minute solo section that starts with the keyboard buzz shifting slightly to the left, with a squeaky guitar solo leaning to the right. Some “doo-doo-doo’s” vocally fill the middle and the song eventually breaks down, getting back to just the drum beat.

While the part each guitarist is playing almost feels like it’s swirling, the panning stays static, and the band instead focuses on pushing tempos and building the song to a climax. It’s a bold move: the set structure of the song is thrown completely out, and all the players are suddenly feeding off each other, pushing the track to new limits. 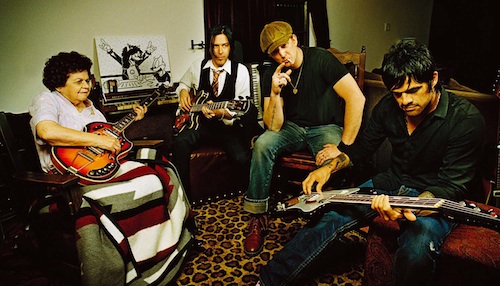 Of course, it all comes back home for one more verse before the song ends, which gives a much-needed sense of closure after the preceding madness. But that remains one of the only semi-predictable things about this song, and I think that’s why I like it so much.

If you can, pick an instrument in this song and see if you can follow it from start to finish.

You’ll find both extreme structure and repetition, and what feels like free-falling experimentation and disorder. All in the span of five intense minutes.

You can listen to Turnin’ on the Screw and the rest of Era Vulgaris on Spotify, or buy it from Amazon (CD,MP3) or iTunes.

Did you discover more in this song from a careful listen on headphones than overhearing it casually on the radio? Were you able to pick out any interesting elements not mentioned above? Know of any other songs with this kind of rich arrangement? Speak up in the comments below!