As I noted in the recent Open Your Ears post on Björk, I had quite a challenge in choosing just one song to encapsulate the sound of Björk, as her band line-up and instrumentation tends to change for every album!

The album Vespertine uses perhaps the most unusual instrumentation of all her albums, including electric harp, custom designed music boxes and found samples provided by the duo Matmos. Samples used in the album include playing cards being shuffled and the sound of someone crunching through the snow.

The word ‘Vespertine’ refers to evening prayers and it is a distillation of this which the album is intended to evoke, along with the feeling of wintertime.

“A word that helped me a lot making this record was “hibernation.” being internal is a form of hibernation, and I related it to winter, the sound of crystals in wintertime. That’s what I wanted this album to sound like.”

Björk has an unconventional approach to composition and has said she usually starts the songwriting process with a vocal melody, often improvised without musical accompaniment while walking. As a result most of her tracks are predominantly melody-driven, and have very little harmonic movement. It’s not uncommon for a Björk track to stay on a single chord during verses, perhaps moving to a simple chord sequence during choruses.

Note: This is the ‘single’ version of the track – the analysis below uses the longer album version, so be sure to grab a copy of that to listen in detail.

The majority of Pagan Poetry is actually based around a four chord progression anchored by a repeating bass figure – so it is likely that the melody of the track was composed along with this bass line.

Björk’s songs often eschew conventional song structure and Pagan Poetry is no different. The song starts with the atypical structure of “double verse, chorus, bridge, chorus” but then moves to a final choral “call and response” section without revisiting the verse or chorus.

Björk has described the song as being about a bride preparing herself for her lover and the structure gives the song somewhat the feeling of a three act play: the first section representing the preparation and anticipation, the chorus reaching a climactic crescendo and the final section evoking post-coital reflection.

An unusual aspect of the track and the Vespertine album in general is the absence of drums or any pronounced rhythm track. This allows the music to be intricate without feeling busy and lends the piece an enormous sense of space. 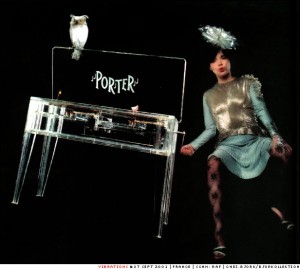 [0:00] The track begins with a music box playing a repeating line. A delay audio effect creates a cascading effect. The music box sounds from this album were created using real music boxes rather than relying on samples or synthesis. The parts were written and arranged by Björk and then transformed into physical music boxes by Jack Perron of Henstooth Discs (an English maker of bespoke music boxes). The music boxes were mounted in beautiful acrylic boxes and formed a promenant part of the stage show for the album’s tour.

A remix of the track using only music boxes was a B-Side for the single “Cocoon”:

[0:15] The main harp figure begins, played by long time Björk-collaborator Zeena Parkins. Zeena is famous for playing some unusual bespoke electric harps, but this track sounds to me like a conventional acoustic harp. The insistant bass line also starts at this time, hammering out the root notes of the simple four chord sequence, three notes to the bar. The pounding analogue synth of the bassline is in stark contrast with the ethereal interplay of the harp and music box and provides the bedrock on which the verses are constructed.

[0:17] The vocals begin. In this first part of the song the vocals are unadorned and clearly and precisely enunciated. The intensity of the main vocal steadily increases through each verse, building into the chorus sections.

[0:43] The music box reappears along with the first backing vocals. The backing vocals are mixed to sound separated and distinct from the main vocal. Throughout the song they act as a call-and-response chant, building into a choir of Björks as the song progresses.

[1:40] After a double verse, the chorus begins, building only slightly in intensity from the verses before dropping back to a repeat of the intro at 2:12.

[2:26] The track drops down into a breakdown section where the bassline is replaced by a skittering bleepy synth which ties in perfectly with the lyric “Morse coded signals, they pulsate”

[3:20] The song builds into the second section where the vocals soar and growl with the lyrics becoming unintelligible (possibly changing language to Icelandic, as is often the case at moments of emotional intensity in Björk’s music). This is a key ‘love or hate’ aspect of Björk and you will doubtless find it gloriously expressive or deeply irritating depending on your taste!

[3:54] This is the final section of the song where the track falls away to nothing at the sound of a cymbal swelled with a soft beater. A solitary voice begins the chanted refrain of “I love him, I love him”.

[4:11] The harp returns and a choir of Björks chant back “She loves him, she loves him”. The vocals are double-tracked and positioned differently in the mix to give the impression of a call and response.

[4:19] The solitary Björk returns over the choir beginning with wistful reflection gradually building to an anguished cry of despair.

[5:14] The song fades out, with the synth falling away to silence. 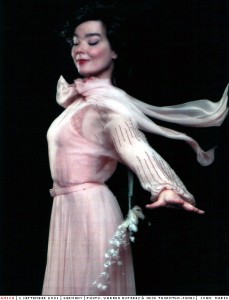 Now that we’ve dissected the elements of Pagan Poetry, listen again, and see if you can hear each aspect as it arises. Try tracking different instruments through the piece and listen for how they interact with one another. Are there hidden subtleties we’ve missed? Can you find the differences between the single and album versions of the song?

And if that’s whet your appetite for more Björk, check out this introduction to Björk in the Open Your Ears series.