Home » Music Theory » "I Just Know How To Play, Man!"—Musical Vocabulary for the Self-Taught Musician

"I Just Know How To Play, Man!"—Musical Vocabulary for the Self-Taught Musician 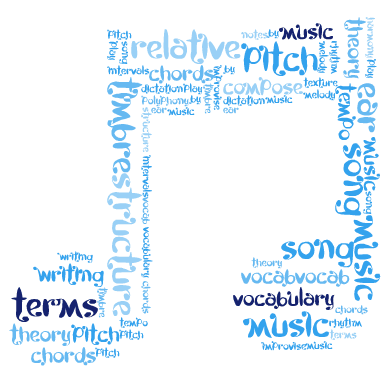 A bit about me to set the scene:
I learned to play the piano when I was about seven, desperate to learn the “The Entertainer” like the kid who showed off at the piano at the end of our general music class, while we all lined up at the door.

(I was an ambitious little one.)

Once I could kind of play a little bit of The Entertainer’s right hand part, I was hooked. I moved on to to the theme to Beverly Hills Cop—a song my cousin could bang out but was foreign to my little hands.

With time, dedication, and desire, I learned more songs, got some lessons, and decided I was going to be a piano player professionally.

I figured I should major in music when the time came for college.

I was different, and I was intimidated.

Even more than that, I was scared to death of music theory.

(I’m not sure which made me the bigger wuss! But I digress…)

For a lot of folks like me who learn to play by ear, we set off on our musical journeys in the quest to conquer songs.

We hope to be able to sit down and play whatever we want, however we want. We pursue this by cultivating our ears, playing with other musicians, and practicing.

Rarely does musical vocabulary get in the way of our abilities—that is, until we start asking more challenging musical questions that can only be answered in musical terms. A Common Language in Music

My husband, a band director and conservatory graduate, impressed me with his good looks and his musical ideas when we first met.

I stayed impressed until I started talking to him about those musical ideas and realized that he was talking about things I already knew—but didn’t have names for!

When he starts going off about technicalities in music that I might already understand by playing (but would not be able to replicate just by reading) I always respond: “I just know how to play, man”.

It turns out that learning the vocabulary of music can really help the self-taught musician.

Logging on to websites like this one, or picking up a music magazine is all well and good. But it’s not going to get you very far is you haven’t the foggiest idea of what the writers are talking about.

So here’s the point of this article: Let me give you the words you need to know to get the most out of the resources you use to teach yourself.

Some of them may already be part of your daily musical diction. Others you may have been wondering about but thought you might figure out along the way (because that’s how we ear-trained kiddos think, right?)

Simply put, a chord is what happens when you play a group of notes from a given scale at the same time.

Usually this will happen when you strike three notes at the same time (a triad).

There are four-note chords as well.

Harmony is when two different notes played at the same exact time sound like they complement each other (as opposed to fighting against each other, which would be “dissonance”).

“Pitch” is how high or low a note sounds.

What is “Relative Pitch”?

“Relative pitch” is how high or low a note sounds in relation to the one that came right before it.

What is an “Interval”?

An interval is the distance in pitch between two notes.

The further apart they are in pitch, the bigger the interval between them.

Different intervals have different names. You might have heard of e.g. “a major third” or “a perfect fifth”.

What is an “Inversion”?

A chord “inversion” is when you a play a chord and the notes are in a different order than normal (but they’re still all there).

An inversion would be E-G-C or G-C-E. They are all C chords, but the arrangement of the notes varies.

What is a “Progression”?

A chord “progression” is which chords follow each other in a song.

Go Forth and Learn Your Vocab!

These are just a few words for you to get acquainted with, explained in layman’s terms, to give you a chance to get the maximum possible advantage from useful references and resources in your musical education.

Still wondering why you should bother with all these technical terms? Read about the power of names in music.