Hi, What’s Your Name? Discover your Secret Power over Music 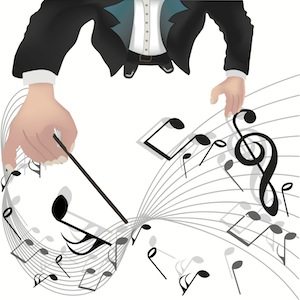 From Ancient Egypt, to Christianity, to Tolkien, Eragon and The Kingkiller Chronicles, a belief in the power of names is an ancient and powerful concept. That learning a being’s true name can allow one control over them.

While normally applied to dragons, demons or dwarves, this concept is nevertheless also relevant in… music!

Just as apprentice wizards learning the names of the elements can allow them control and mastery over them, musicians learning the proper names to use for musical elements fundamentally empowers them to appreciate and use them better.

And fortunately notes, chords and other musical entities are not so fiercely protective of their true names as mythological creatures!

Take out your vocab books…

Remember your high school language class (French or Spanish?) and writing down your 10 ‘vocab’ words for the day which you’d be tested on next week?

You probably didn’t need to be told what a dog was or how to recognise one when you saw it – you had the mental concept of ‘dog’, so you just needed to be told the word (‘chien’, ‘perro’). Once you knew that, the formerly-foreign language was brought to life just a bit more, and you started spotting dogs in every passage of text you read…

What’s the relevance to music, you ask? The chances are you know more musical concepts than you realise. You just don’t know what to call them yet.

Spend a little time learning the words to attach to these concepts, and (just like with the ubiquitous dogs) you’ll find these new musical elements cropping up everywhere. Music is enriched and enlivened by your new understanding.

If you thought the vocabulary part of music theory exams was boring and unnecessary, think again! While the number of archaic foreign terms may sometimes seem excessive, the fundamental purpose is a powerful one: connect those strange words to the music you enjoy listening to and playing – and you might just find yourself hearing more and enjoying music more as a result!

Find out why it’s worth learning “all that music stuff”!

Well, maybe not any other name…

One thing to note: it doesn’t really matter what you call a dog.

As quoth Juliet, “That which we call a rose / By any other name would smell as sweet”!

To some extent, you could craft your own vocabulary for every aspect of music, and as long as your terms are unique and you use them consistently, it would empower your brain to think about and understand music in much the same way. However, calling a crotchet a “fergley-burgley” or a minor triad “Jeff” is not an approach we can wholeheartedly endorse.

Calling a crotchet a “fergley-burgley” or a minor triad “Jeff” is not an approach we can wholeheartedly endorse.

There are two good reasons to use the standard (or in Tolkeinian terms “true”) names for musical elements in your ear training:

So let’s save ourselves some trouble – and learn the “proper” names for things! They may not be as fun as the ones you’d imagine yourself (or may have already started informally using in your head) but they’ll be far more effective for developing your musicianship.

Names are a Major Source of Happiness

Ask a non-musician about major and minor chords, and they probably won’t know the difference. Actually, they probably will – but they’ll tell you they don’t, because the terms are unfamiliar.

Thousands of ear training students have learned just this skill, using our Chordelia: Triad Tutor app, and it takes little more explanation that is given above.

Or another suggestion: play them a clever digital transformation, like this re-imagining of REM’s classic “Losing My Religion” (originally a gloomy ballad):

I bet you can hear the difference! However much musical training you’ve had, the impact of changing major to minor is clear. That’s the powerful universality of music.

Now watching the example above won’t magically make you a virtuoso musician. Ear training is a long and continuing journey. But using this example to demonstrate the concepts of “major” and “minor” in a meaningful way can establish those concepts in a new musician’s mind in a way which will ensure they never wonder what “major” and “minor” mean again.

In the world of audio, knowing the lingo often feels like half the battle. Whether you’re a recording engineer talking EQ, a producer needing to give your opinion on the effects used in a track, or a discerning music lover trying to explain to a friend why you buy CDs rather than MP3s – you need to find the right words.

At the outset, terms like ‘flanger’, ‘spectrum’ and ‘phase shift’ may seem alien and intimidating. But as soon as you listen to a few examples to illustrate each, the terms take on meaning and your brain starts to hear these elements more precisely and reliably.

We can also see the power of names at work in the effectiveness of solfège (do re mi) or other solmization schemes which name each note in the scale. This approach is more popular in some countries than others, but has a long tradition of producing superb and remarkably versatile musicians.

The simple concept is that each note in the scale should have a singable name – not just “the tonic, the supertonic, the mediant” etc. you might be used to from classical music theory, but a simple one-syllable name like ‘do’ or ‘fiss’ which lets you associate the name to the note in a practical way as you study music.

Singers and musicians trained in solfège can make use of it for relative pitch skills like intervals and sight-singing – simply by studying pitch using named notes rather than a collection of anonymous pitches.

Assigning clear unique names to musical elements allows your brain to anchor to them, refer to them, and ultimately build on them to understand more sophisticated concepts. (Read more about “how we learn”)

Knowing the same names as other musicians use will let you communicate more directly and collaborate more effectively.

So don’t spend another practice session churning out the same old anonymous notes. Don’t waste that expensive studio time in your band’s next session waving your arms around trying to convey that “weird spacey back-and-forth thing” to your engineer… Take a bit of time to learn the names of the musical elements you encounter every day.

After all, every good relationship starts with “Hi, what’s your name?”

Why should your relationship with music be any different?