Though we tend to refer to the entire span of Western art music history – including the Renaissance, Baroque, and the later Romantic and 20th Century periods – as “Classical Music”, the actual moniker is most accurately applied to the era from 1750 to 1820. Dubbed by music historians as The Classical Era this heady time in music history hosted three of the most famous composers of all time: Haydn, Mozart and Beethoven. Each of these three was a supreme master of musical form, especially the various three-part forms that were so popular in those days.

In 1804, Ludwig van Beethoven finished the 21st of his 32 piano sonatas; it was nicknamed “Waldstein” and counted as Op. 53 in his catalogue. Let’s target the opening movement (the first of three), marked Allegro con brio, as a superb 11 minute example of sonata form in action. This composition falls into what historians usually call Beethoven’s middle or “heroic” period. He was by all accounts and evidence completely deaf at this time, retreating from public life to avoid the solo concert arena and focus squarely on contemplative composition. It’s no wonder that works like the Waldstein Sonata boast a new level of creative prowess and an instinct for ingenuity and exploration.

The Power of Three

A sonata form movement is essentially a ternary form: think “ABA” again, but the more specific labels of Exposition-Development-Recapitulation prove useful for analysis. In the Exposition, a listener is treated to the main themes, in the home key (or tonic), but before the initial A section is finished, there must be a definitive move (or modulation) to a new key area. This creates tension that the formula will eventually resolve. The Exposition presents most all of the content from which the rest of the movement is built, so for good measure, the composer marked repeat signs—maybe figuring a listener could use the reinforcement!

The Development (B section) brings the initial themes into play, but fragments and alters them, all while traversing through diverse key areas (often far-removed from the home key); drama and complexity build, only to be quieted by the Recapitulation—an obvious return to themes and home key of the A section. Ultimately, sonata form is a closed form, requiring resolution of open-ended creative wanderings.

Beethoven’s exposition presents two themes: the first [0:42] is introduced by dark, low pulsing chords. Theme 1 is based on virtuosic, descending runs and scale-like passages in sixteenth notes. Theme 2 contrasts in texture and mood: mark the bridge to it as starting at [1:27], then its official entrance at [1:35], characterized by hymn-like, chordal sounds. By now, the movement has moved from C major to the somewhat surprising key of E major, which builds the tension that the Development section to come needs for energy and momentum.

At [1:53], the chordal melody moves to the left hand. The lower register would transform it into something more somber, but Beethoven layers in a baroque-like counter-subject in the right hand, where eighth notes grouped in 3’s lend lilt and forward motion. Marking the end of the Exposition are more sixteenth-note runs then a delicate trill at [2:41], which you’ll hear again in the Recapitulation section at [9:46]. This trill signals the push to a final cadence.

At [3:08] is a welcome repeat of the opening chord pulses, designated clearly as the second run through the Exposition; this repeat ends at [5:46] to usher in the Development. The middle section is meant to sound restless and dramatic, but note reminiscences of the recognizable first theme of the Exposition. Beethoven revels in harmonic exploration while hinting at fragments of the main ideas, all carefully cemented in the listener’s ears via the Exposition.

Beethoven is famous for bringing listeners in and out of main sections of a form via a transition or bridge. In the Waldstein sonata he transitions out of the Development section back to the home plate that is the Recapitulation with a dramatic, cumulative passage starting at about [7:10]. Hear a sort of murmuring in the deep, low range of the keyboard, then an expansion to the high register.  Scalar flourishes lead conspicuously back into the Exposition’s main theme. There’s no mistaking it now: the Recap is on, in dramatic fashion, at [7:33], signaled by familiar pulsing chords then theme 1 and theme 2 in succession.

After the Recapitulation (which ends on some heavy sustained chords and weighty fermatas) comes a sort of appendage known as the coda at [11:54]. Completely in the home key of C major, it functions as Beethoven’s opportunity to drive home the fact that this A section has brilliantly lassoed the disparate the required bits and pieces of a sonata form movement into a cohesive whole. 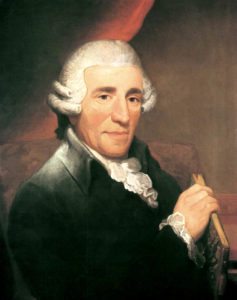 Josef Haydn was called the “father” of the string quartet. In 1781 he compiled a set of six known as his Opus 33. Here we focus on Quartet No. 2 of that set, and specifically on its fourth (and final) movement.

The composition is in E-flat major and was nicknamed “The Joke”. The movement is marked Presto – very fast – typical for a finale movement, as a proper send-off for audiences. Indeed, the two violins, viola, and cello players exhibit impressive dexterity in managing the melodic leaps and bounds of the disjunct melody. Note the rests, or brief lifts between phrases: this contributes to a sense of balance and symmetry in the melodic material – and ultimately to the “singability” of the material (something Haydn would have wanted for his listeners).

One useful trick for string quartet listening is applying the notion of a conversation: there is an equality of parts among treble and bass sounds, supporting the idea that each instrument has something to say. The analogy of a friendly argument might be in play, but in ideal Classical-era fashion, all tension is resolved via closed-form procedures and tonal resolution.

This movement is in rondo form and capital letters prove useful in outlining its structure: ABACA. The “A” material recurs as a refrain framing the contrasting B and C sections. Similar to the Baroque ritornello form, repeats do not have to be exact: the composer may shorten the refrain, present it in a different key area (like switch from major to minor), or add counter-subjects and ornamentation for contrast. In any case, a rondo structure satisfies both a composer’s urge to be direct and clear and it simultaneously manages a listener’s expectations about sequence of ideas.

Haydn presents the “A” material at the start, then quickly repeats it at [14:01]: remember, he would want an audience to have the refrain firmly in the ears so that the movement away from, and return to it, would resonate. He diverges from this foundational material and into the B section at [14:50], calling for forte as the harmonic material wanders into darker, minor key areas. Note the return of the refrain (A), after a notable pause in the action, at [15:17].

The next major diversion (C) comes at [15:45], a passage marked by a contrasting theme and again featuring a louder dynamic; listen for how actively involved the cello becomes here, sharing in the melodic movement all the way through [16:15], and the variety of articulations Haydn called for (including shifts between pizzicato and legato bowing). And as expected, things give way once again to a return of A right at [16:17].

At [16:27] comes a broad chord, with lilting descending eighth notes to follow, providing a pause from the frenetic pace. A fun hint at the A material sounds at [16:48], then a pause …  then another snippet of the refrain, by now so familiar, at [16:51]. It seems the movement comes to an end with a deliberate cadence at [17:00].

But wait! The quartet was not nicknamed “the Joke” for nothing. As the audience gives in to applause, the ensemble sounds the actual ending flourish at [17:08], proving that even with all of the Classical-era “norms” come flexibility and the unexpected, so that like all art should, this music keeps us on our toes.

So what makes the Classical Era so classic? Classical Era composers found that musical form provided the perfect framework for their widely varying musical expression, from gallantly entertaining to profoundly moving. The forms established in this era are truly classic, enduring through the 1800s, 1900s, and to the present day. But even the seemingly endless variations on classical forms were not enough for some of the brash rebels of the Romantic Era.

Remember though, the seeds of all to follow were planted in the eternal works of Haydn, Mozart, and Beethoven. Until next time, listen well to these masters, and you’ll gain a deeper understanding of the whole of Western Classical music. Then we’ll learn how 19th-century composers both expanded on the Classical Era rules, and broke them entirely to create highly personal musical expressions.