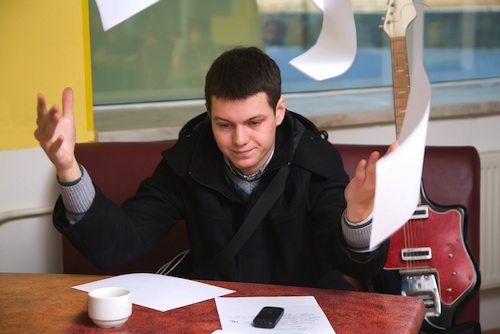 If you’ve started to write your own songs, you’ve probably been faced with the same type of ‘blank page’ syndrome all writers face. You know how to play your instrument but whenever you try writing some songs of your own, you get stuck in a 3-chord or 4-chord progression with no way out. 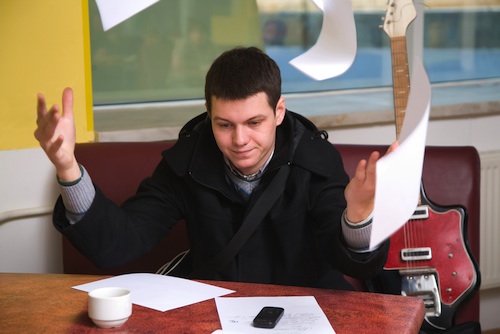 Does this seem familiar? If your answer is yes, it might be time to try and branch out from those cliché chord progressions (effective and popular though they may be) such as I–IV–V and vi–IV–V–I.

Read on to discover a few songwriting tips that can help you spice up your original music!

Note: This article uses roman numeral notation and discusses chord progressions. If these topics aren’t familiar, try starting with this introduction to chord progressions or reading more articles about chords.

One trick that works for many people is the following: if you already have 3 or 4 chords that you like, consider using them for either the verse or the chorus of your song, but not for both. For the remaining part – either the verse or the chorus – allow yourself to use one of those chords, but then find 2 or 3 additional chords that are different from the ones used already.

For example, if I have a song with a verse going like this:

I might keep one or two chords (let’s say I and V) but prohibit IV and vi from the chorus. I’m then forced to use a different chord, for example:

Just by doing this, you escape the 4-chord trap while also adding a bit of novelty to a song which otherwise could have ended up sounding just like all the others…

Of course, this has the potential to lead to very awkward transitions and songs, but it can also lead you to discover very interesting combinations. Use your listening skills to decide what works and what doesn’t.

You might also want to try your progressions in different keys – believe it or not, what sounds strange in one key can really sound completely different in another, especially on an instrument like the guitar where chord shapes have a big influence on the sound.

The simple things you see are all complicated

For example, you can take a simply chord progression like the one above, I-vi-IV-V and substitute one alternative chord. For example, how about changing the IV chord for a iii chord?

Then you can use the first chord progression for one part of the song – verse or chorus – and use the new one for a different part. This is also a great way to create a bridge that sounds familiar while still changing things up a bit.

These tips are only two out of a million. There are many ways for you to branch out from the typical 3 and 4-chord songs, and the more you do it, the more natural it will be. Once you used those two tips a few times and come up with a few songs that you like, you’ll find that you’ll naturally and instinctively start to go places musically that you didn’t dare to go before.

It’s like anything: you need to actively practice at first, to develop the skills which will later feel natural. Practicing exploring these kinds of alternative chord progressions will let you branch out in interesting ways from the traditional progressions you always use.

Do you have your own tips to share on writing interesting chord progressions? Leave a comment and let us know!