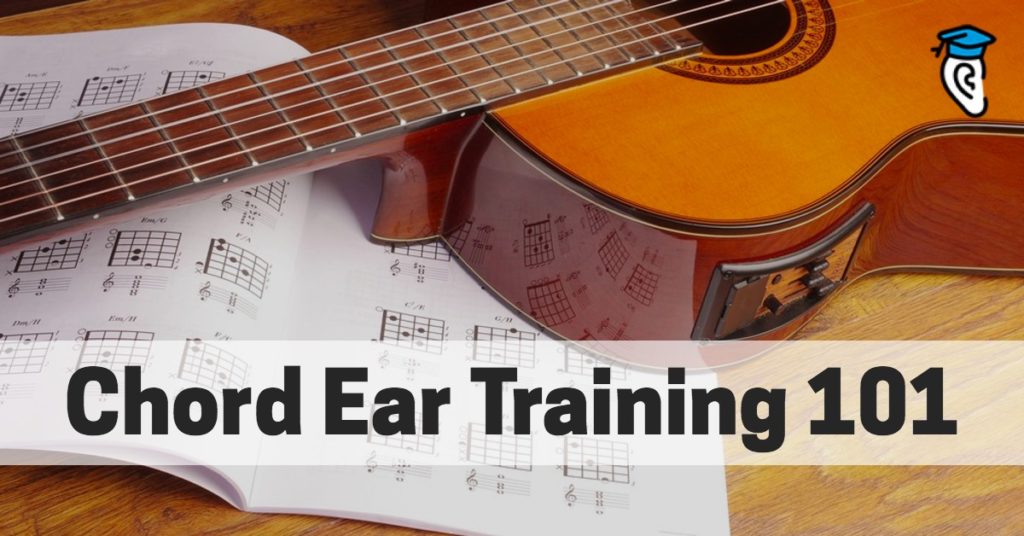 Dream sequence: you’re preparing to audition for your favorite band. Feeling super-confident, you show up at the rehearsal space and knock on the door. The door opens, and they invite you to join in playing some of their hits. Wait, where’s the chord chart? Playing by ear wasn’t part of the deal! What do you do now?

If you know how to play chords by ear, no problem! When three or more notes sound at the same time, chords happen. While they might not be the up-front star of the show, chords form the underlying harmonic structure that tells the keys, guitars, bass, horns, and background vocals what notes will work and what notes won’t.

Even though it might seem magical when someone sits down at the piano or picks up the guitar and seems to know every song, with a little chord ear training, you can do it too! Even if you don’t play chords on your instrument, chord ear training is essential for guiding you in playing by ear, including for bassists, saxophonists, fiddle players and more. 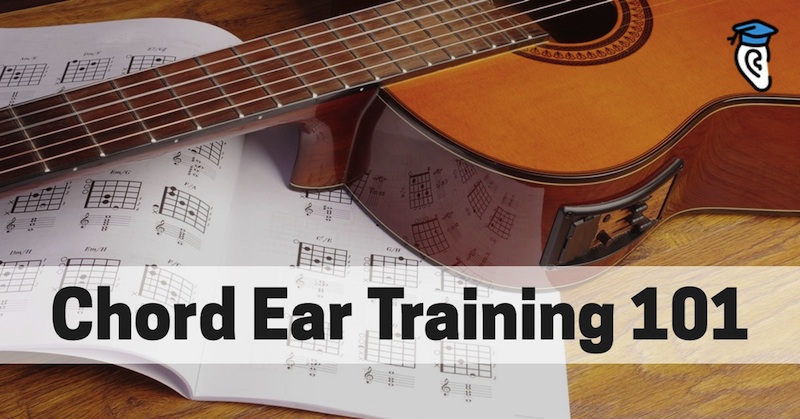 We’ll begin by talking about recognising individual chords and then move on to recognising sequences of chords, known as chord progressions. Read on to discover how you can learn to play chords by ear.

Before worrying about playing all the chords in a song you should master the basics of recognising the type of just one single chord. This lays the foundation for recognising chord progressions later on.There are two main categories to consider: three-note chords and four-note chords.

A note for guitarists: When we talk about “three note chords” don’t be misled. The actual chord you play on guitar may have more than three strings sounding, but they will be repeating the same three notes. For example, open-position C major features the notes C, E and G only, making it a three-note chord.

Learning to identify single chords is the first step. There are four main types of basic three-note chords, or triads. The two primary triad “flavors” are major and minor. When heard in isolation, major triads seem to have a more “sunny” sound, while minor triads sound more intense or serious. Listen to this example:

Major and minor triads are the foundation for the vast majority of the harmonies we hear. Learning to tell them apart is the beginning of all your chord ear training.

The other two main triad types (diminished and augmented) are not quite as common, but they open up new possibilities for your musical creations, and prepare you for the more advanced chords that you might find in blues, jazz, classical music, and traditions that use more minor keys and modes, such as flamenco, balkan music and others.

Listen to all four triad types:

So far, we’ve been listening to these chords where the notes are stacked in a certain order:

This is called “root position”. However, once these three notes are identified, they can appear in any order. These are called inversions, or “voicings” of the chord. Even though inversions alter the sound, the triad retains its basic character and identity.

Four-Note Chords… and beyond!

When we add another note on top of that triad, the possible combinations expand considerably. The most common are the seventh chords, where one more note is stacked on at an interval of a seventh from the root, or as another third stacked on top of the 5th.

See a pattern there? 1st (root), 3rd, 5th, 7th… the notes stack up here in odd intervals. More chords are created by adding the extensions—intervals above the octave—9th, 11th, and 13th. These chords are familiar territory to jazz musicians.

Here’s a nice tutorial from PianoGroove demonstrating the different types of seventh chord:

Other chord types include suspended and sixth chords. Of course, every added note opens up more rich and various possibilities. But with a good grounding in triad recognition and diligent practice, it’s not hard to learn to recognize these complex characters as well.

Once you have a feel for the different types of chord, the next step is to learn to hear how chords relate to each other as they progress through a piece of music. Like interval training where an interval may start on any note, chord progression ear training is about the relationships between the chords rather than the actual chords themselves.

To identify how chords relate, music theory uses Roman numerals (I, IV, V etc.) to tie them to their position in a scale. If you’re not already familiar with this system of naming chords, check out “The 3 chords every musician should know”.

To begin with, let’s start with the end—the end of a musical phrase, that is. Most musical phrases end in simple two chord progressions known as cadences:

Did these have a familiar ring? They are very common in classical music, but also operate in most other popular musical genres. Observe how the first chord in the progression leads, or “resolves” to the second chord.

Now work on identifying these yourself. Tip: start simple, with triads in root position. That way you can easily apply your knowledge of intervals to identify the movement of the root note. Once you become familiar with the sound of the cadences, you can work on hearing the same progressions with inverted chords.

Progressions using the I, IV, and V chords form the basic harmonic structure of the past 500 years or more of Western music. Even today, you’ll be shocked how many thousands of songs use only these three chords!

It’s a little harder to pick out the root when you start using inversions:

There are related two strategies that are both very useful here:

Once you have exercised well with chords in isolation, move on to real music. You can start from a list of three-chord songs.

Four chords… and beyond!

The next chord to add to our toolkit is the “vi” minor chord. Then follow the same method as you did for the two- and three-chord progressions. Four-chord songs are everywhere, just like three-chord songs.

Now that you’ve seen how training on only three chord combinations (IV–I or V–I cadences, I–IV–V and I–V–vi–IV) puts a world of music within your grasp, aren’t your ready for more?

The good news is that these basic chord progressions aren’t just the basics – they also serve as the building blocks of much more complex progressions, such as you might find in jazz or even classical music.

One of J. S. Bach’s favorite tricks is what jazz musicians call the “V of V” (also known as the secondary dominant. He constructs this by looking at his destination—the final cadence in a phrase—and using the V of the V chord, then the V chord of that V chord, and so on. That way he can go way “out there” harmonically, and always bring it home.

Here’s Bach going galactic with the V of V and beyond into harmonic warp drive:

And a more down-to-earth demonstration of secondary dominants:

Believe it or not, all the crazy chords you find in jazz can be eventually be related back to the simple V–I cadence. So beginning with these basic chord progressions is a great way to lay the foundation for understanding chords of any genre.

Chord ear training is like cataract surgery (but a lot less painful!): Suddenly the blur of harmony is revealed as a rich tapestry of notes each with their own part to play. With regular practice, and maybe a little help from your friends at Musical U, you too will experience expanded enjoyment of music, as well as new-found skills in playing songs by ear, improvisation, and interacting musically with others.

Are you still standing in that audition, staring at your instrument, not knowing what to play? Why, you just need a little chord ear training fairy dust and you’ll be ready to rock!