How to learn from thousands of 3 chord songs 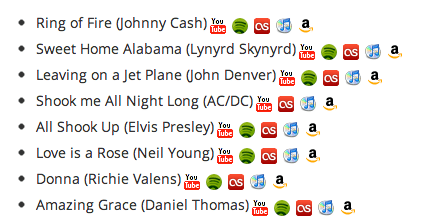 You’ve probably heard of “3-chord songs” before. These songs tend to be catchy and popular and only feature a few select chords – usually the same ones repeating themselves over and over.

Have you seen these books in music shops: “How to play 3 chord guitar” or “1000 songs with 3 chords”? It might sound like exaggeration but there really are a huge number of songs which rely on just 3 chords. You might be surprised just how much variety is possible despite this simple musical basis.

The good news? These songs are great for beginner musicians and are also the perfect tool to train your ears and learn how to recognize certain chords. Ear training exercises are great, of course, but nothing beats the capacity of recognizing chords in actual pieces and songs you hear.

Let’s start by looking at some of the most well-known 3 chord songs:

You can also explore The Beatles’ early releases, though some of these push the 3-chord concept a little bit further by adding a few extra chords.

As you can see, a big chunk of blues, rock & roll and earlier popular music was based around 3-chord progressions. There is a reason for that: often three chords is all you need!

Keeping the harmony simple allows these songs to focus more on the lyrics, the melody, or the arrangement, for example. Regardless of why they were written that way, these songs can help you improve your musical ears.

The 3 most important chords

As we learned last time, the three most important chords in music are the “I, IV and V” chords.

It shouldn’t surprise you then to learn that all those 3-chord songs will most likely use the I, IV and V chords. These chords are also the standard progression for a “twelve-bar blues”, the foundation of blues music.

Those three chords are what represent the ‘tonic’ sound, which is the core harmonic context of a song. All the other chords which can be used in a particular tonality are usually only there to either move from one of the chords to another in a more colorful manner, or add a minor touch to an otherwise major sound.

Most beginners, when trying to figure out how to play a particular song, will pull up tabs or sheet music from the Internet. When faced with 3-chord songs, don’t do this! Instead, use your ears.

Try to figure out what the I chord is; in most of those songs, it will be a simple major triad. You should find there’s a particular major chord which sounds good pretty much throughout the song. You can also try playing the corresponding major scale and seeing if it fits well against the melody.

Those songs are based on simplicity, so you won’t need hours to figure out what chords are being used!

Once you figured out the key of the song, or the I chord), you’ll then be able to figure out the IV and V chords – just count up the scale to the fourth and fifth notes and use the corresponding major chords. For example, if your I chord turns out to be F Major, you would count up F-G-A-B♭–C to learn the IV and V chords are B♭ Major and C Major respectively. These are probably the ones being used throughout the song.

Note they won’t necessarily be found in the order “I–IV–V“! This is the next thing you’ll need to use your ears to figure out: what is the progression? Not so hard once you know it’s all based around just three chords!

Here is a little exercise for you to try. The song “Love Me Do” by the Beatles, is a typical 3-chords song. By listening to the audio clip of the song, and the slowed down piano version that follow, can you figure out the I, IV and V chords and then write out the entire chord progression to the song?

Love me do: Verse

Love me do: Chorus

If you’re having difficulty getting started there’s a hint at the end of this article.

Training your ears means eventually being able to recognize what chords and intervals are present in a song without sitting down with your instrument or spending hours at the piano or guitar trying to figure out what goes on in a particular song. The key to being able to do that is to practice ear training.

Use those 3-chord songs to do so; they are simple, easy to get started with, and will also help you build your repertoire. The more you practice those songs and try to transcribe the chord progressions yourself, the more your ears will get used to the I–IV–V progressions and you will soon be able to spot those chords in more complicated songs.

In future articles we’ll be looking at 4-chord songs and how using additional chords can add interest to your own song-writing. For now: use 3-chord songs as the first step in your ear training journey!

Have you found any great guitar songs with 3 chords? What’s your favourite 3-chord song? If you have tips or tricks to share – or need help getting started – leave a comment below!

Exercise hint: “Love Me Do” starts on a G Major chord.