Home » Instruments » Singing » Are singers real musicians? The blessing and the curse of being a singer

Are singers real musicians? The blessing and the curse of being a singer 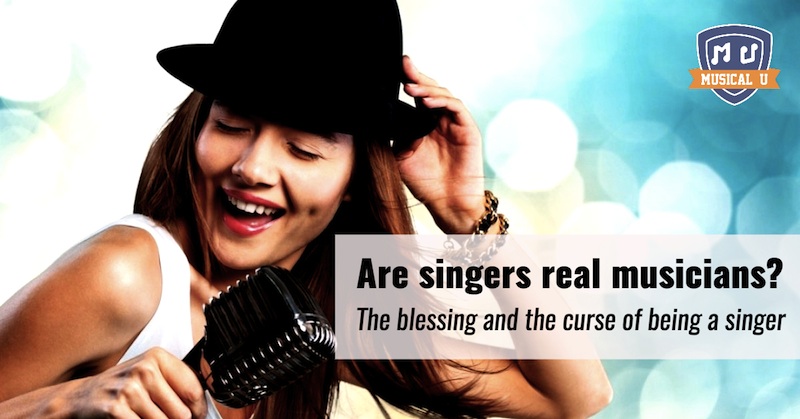 Becoming a singer is a dream for many people, especially young people who dream of taking the stage, winning X-Factor or The Voice, or even touring the world, mic in hand.

But tell me you’re a singer and I’ll be a bit skeptical. Certainly not as impressed as if you told me you play guitar, or violin.

That’s the blessing and curse of becoming a singer instead of another type of musician.

We can all sing

Everyone on the planet who can speak can sing.

Yes, some people need to learn to sing in tune, but the singing voice is the one instrument we’re all born with.

That means that anyone can stand up at karaoke night, mumble through a few verses and declare themselves “a singer”. You can’t quite say the same for other instruments.

The curse of being a singer

The problem with singing is that, as illustrated above, there’s no real commitment of effort required to call yourself “a singer”.

If you decide to become a guitar player you need to buy an instrument and put in at least a month of daily practice before you start to sound like you can play it. That means that anyone who says they play guitar has at least put in a minimum amount of effort.

But tell me you’re “a singer” and I inevitably wonder: are you someone who has ever taken the time to practice singing? Or are you just someone who likes the sound of their own voice and thinks they have “talent”?

Many singers (including all of those who’ll go on to become great) do put in the practice, but there are also a lot who expect their natural ability to be enough. It’s that type of “singer” that gives singers a bad rap among musicians.

Over at EasyEarTraining.com we offer a free “Learn to Sing” course and every week I converse by email with dozens of new students taking that course. What has become clear is that many have sung for years and considered themselves “a singer” but are only now taking the first steps to answer questions like “How can I learn to sing in tune” and “Why do people say my voice sounds bad?”

If you’re this type of singer then I would say you’re not a musician… yet. You love music and that’s great. You’ve started to express yourself musically and that’s fantastic.

But if you treat singing the way you treat talking, as something you never practice or improve at but just expect to do – then you’re unlikely to reach the kind of musical ability associated with really being “a musician”.

Full credit to these people: they are taking steps to become better singers. But despite having already sung for years, I would say they are only now beginning to become “musicians”.

The blessing of singing So what’s the good news?

The good news is that there’s absolutely no reason a singer can’t be just as dedicated and superb a musician as an instrumentalist.

In fact, gaining the musical confidence to stand up in front of a crowd and sing can require great dedication.

Developing your voice from a wispy, friendly little voice into a powerful, versatile instrument takes years of dedicated effort and can produce incredible transformations into show-stopping voices.

Sight-reading music as a singer requires a substantially better musical ear than it does for instrumentalists because you can’t rely on your fingers and the instrument’s keys to produce the right pitches after you read the notation. You need to know in your head how it should sound, directly from the core, before you can sing it correctly.

In simple ways, like the fact that you can perform lyrics with rich meaning not just notes and musical phrases, to the more complex and subtle power of the voice, to emote and rouse reactions in the listener quite beyond the lyrical content.

There’s also the ability to blend with other human voices and make the listener feel like they too are singing, in a deeply instinctive human way.

Then there’s the sheer joy you get (along with other physical benefits) from singing which I believe is unparalleled on any other instrument.

With TV shows like The Voice perpetuating and amplifying the Talent Myth, that all you need is a “gift”, many singers delude themselves that all they need to do to be a great musician is “have a voice”. I tend to side with the point made here that in the end a natural ability for music isn’t all you need—it’s simply a head start, and in the end it’s always hard work that makes the greats great.

I may be biased, as a singer myself, but if you ask me, the blessings of choosing singing as your instrument far outweigh the curses.

So next time someone asks about your musical life and you tell them you’re a singer, if they raise an eyebrow just smile to yourself, knowing that you’re not a “sing in the shower and karaoke nights” kind of a singer.

You’re the real thing. You’ve put in the work you’ve developed your voice, you’ve gained confidence and become a capable confident powerful musician, able to stand proudly alongside the likes of any instrument player.

And that truly is a blessing.