Home » How To » Practice » Talent vs Practice in Music

Talent vs Practice in Music 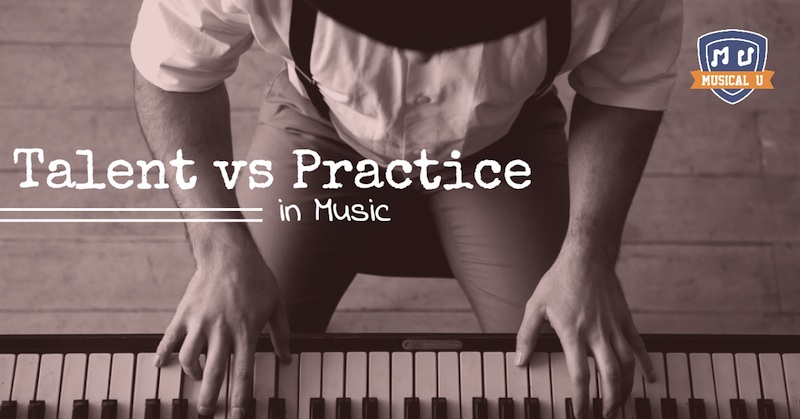 What is talent? Are you born with it – or does it seem to develop over time? When I started looking into this I quickly discovered I had opened a can of worms. The amount of controversy over nature vs nurture can be somewhat overwhelming. However, despite being a relatively young musician I was keen to try and tackle this question, taking my personal experiences into account.

Before I start I’d like to say that one thing everyone agrees on is that the most skilled musicians have worked hard to get there. It’s hard to dispute the thousands of hours the great (and maybe the not-so-great) musicians you hear on the radio or in concert have practiced to become who they are. With this in mind, how much did talent contribute to their success?

The initial advantage of talent is it appears to be a head start. When I was in high school there were individuals with an unfortunate sense of pride often heard saying “I didn’t even practice!”. I too was victim of this false sense of accomplishment because in the end we were actually hurting ourselves and our music groups. While it’s true that a few of us had enough “talent” to avoid practicing outside of rehearsal to do just as well as those who did practice, those who worked hard easily surpassed us.

It is, in fact, very likely that if some of us “talented ones” had actually been practicing and improving our skill, we would have achieved a whole different level of musicianship compared to our peers. At the same time, those who were working hard quickly caught up to the talented individuals and surpassed them as they continued to polish their skill.

When the Going gets Tough

How many people quit before they realize their potential? How many gave up when they felt the most overwhelmed, where if they had only pushed a little longer they would have started to feel the progress they had made? Another aspect of talent seems to be heart and passion. The people I see who are the most talented musicians have an unquenchable love for music. They eat, breath, and live music and they make an extraordinary effort to make it part of their lives.

As Remus Badea, Executive Director of the American Music Institute, so brilliantly stated in his article “Talent vs Hard Work When Studying Music”

“Imagine an individual who is forced to take up music by a parent, guardian or teacher. The decision to practice was imposed; therefore, the passion to pursue the practice is not in them. The student will tend to skip practice or even drop out entirely. Passion for the instrumentalist-to-be is paramount for them to be successful.”

Passion for the instrumentalist-to-be is paramount for them to be successful. – Remus Badea

This desire is essential and easily found in those considered to be talented or skilled. When you want and love something so bad it becomes an obsession, it drives and motivates you and your entire character can be shaped around it. Such determined passion seems to yield incredible skill and talent.

Another aspect of being talented is having talent around you. While it may seem paradoxical, the saying “talent breeds talent” seems to have a lot of hold. When surrounded by talented musicians, it only seems natural that you start to escalate to their level.

Take a look at almost any group of musicians in history. The more talented people in the group, the more talented the group is as a whole. You’re reading this going “Uh, obviously? Thanks for that novel thought.” But when you start to look at it from different perspectives it becomes very intriguing. When multiple musicians get together, their talent seems to build off each other in a kind of a multiplying effect. Collaborations are a good example of this. It seems like music created by multiple musicians is typically better than music created by only one.

A great example of this is the relationship between audio producer/engineer and artist. The artist turns up to the studio with their song, and as they work through recording it the audio producer will often suggest various changes to the song to make it better. Another example is the very common student/teacher relationship. A talented teacher will produce more talented students.

The Psychological Evidence and the Truth

A strong argument for talent being present at birth is intelligence. In Dr Piers Steel’s “Hard Work Beats Talent (but Only If Talent Doesn’t Work Hard)” article, he states:

“There are two things to take away from this. The first is that being smart is a useful thing to inherit, right up there with a large trust fund. The more smarts you have, the higher your performance…intelligence’s benefits don’t disappear; the more innate talent of any sort you have, the better off you are going to be”.

However, he continues on that subject by saying:

“If you take a careful look, however, you will notice that those of us with more modest abilities do have a chance. Even if you weren’t born with genius in your genes, you can outperform the smartest of individuals as long as you work hard and the latter doesn’t.”

It seems clear that although talent seems apparent, it is not a necessity to be a great musician. In some ways, learning music is similar to reading. No one opens a book for the very first time, sees the patterns of characters and just starts reading. Just as no one starts off their musical journey by sitting down at a piano and playing an eloquent piece of music composed in their mind.

More realistically, they sat down, enjoyed their brief experience attempting to play, and decided to pursue it until they fell fully in love with music aspiring to improve and be their best. Just like the more you read the better you become, the same can be said for music. It may start off rough, but as you continue to grow, you will find things that were once difficult cause you no difficulty at all.

The possibility to succeed and be great is well within your grasp. If you want to be a musician the biggest obstacle holding you back is yourself. So take the leap and start your journey.

I had a very talented friend tell me “I believe that if you have the heart to play music and love doing it, then you are a musician.” and I wholeheartedly agree. It is my belief that if one sets their heart and mind to it, music is fully within their grasp. “Talented” or not.

I believe that if you have the heart to play music and love doing it, then you are a musician.