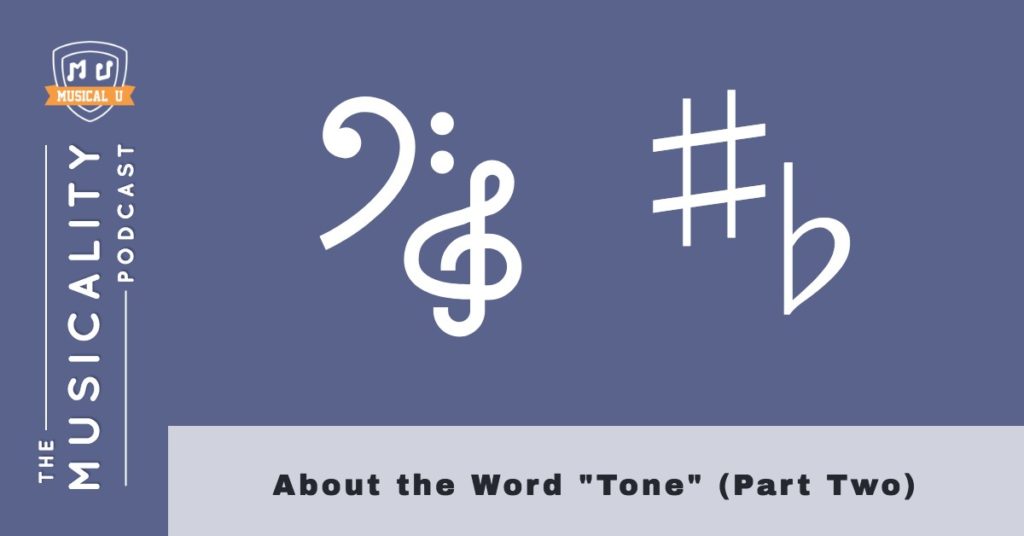 With so many possible uses, it can be difficult to know exactly what we mean when we say “tone”. In part two of our series about tone, we look at three more common uses for this multipurpose word, and how to contextualize them in music.

Welcome back to Part Two of this episode all about “Tone” and the various meanings that word can take. If you haven’t heard Part One please give that a listen first, you’ll find a link in the shownotes for this episode.

In Part One we talked about three meanings the word “tone” can have when it means a sound.

Firstly, people use “tone” interchangeably with the word “note”. Secondly, “tone” can mean a sound which is a single pure frequency, such as 1 kilohertz tone. Thirdly, “tone” can mean the sound produced by a pair of notes a fixed distance apart, either one after the other or both together, i.e. the interval between two notes. It’s another name for the interval of a whole step, also known as a major second.

So let’s move on to the three meanings “tone” can have when referring to just an aspect of a sound rather than the sound itself.

This is a sketchy one. It mostly comes from the related word “intonation”. A singer or instrument player’s intonation means how accurately they’re hitting the right pitches with their notes. Having bad intonation means being out of tune.

So you might hear musicians, particularly singers saying for example:

“I really need to work on my tone.”

“I like how they sing but the tone they produce can be really flat.”

To be honest the word “tone” isn’t often used in this way – but what I’ve found is that musicians hear a lot about “intonation” and then unconsciously merge that together with what they hear about “tone”. That can get very confusing, especially because, as we’ve covered already, the word “tone” *can* be very much about pitch or frequency.

So it’s normally best to separate those two words in your mind. Tone has the various meanings we’re talking about in this episode, and “intonation” is about being out of tune, sharp or flat.

How *should* we use the word “tone” to refer to an aspect of a sound then?

2. Tone means the balance of bass vs. treble

First of all we have the meaning that will be familiar to anyone who owned a stereo system in the 80s or has bought an electric guitar.

Stereo systems often used to have a set of “tone controls”: a knob labelled “bass”, one labelled “treble” and sometimes a “mid” one too. Electric guitars typically have one or more knobs labelled “Tone”.

“I love how bassy the tone is from this guitar amp.”

“I always set my stereo tone to full bass and full treble.”

“You’ll want to experiment with your guitar’s tone control when you add distortion.”

This meaning of “tone” is simply the balance between the low and high frequencies in a sound, also known as the “bass” and the “treble” frequencies. So those bass and treble knobs on the stereo adjust the stereo’s tone by reducing the amount of bass frequencies or treble frequencies respectively. On an electric guitar the “tone” knob simply adjust how much high frequency is allowed through, so turning the knob adjusts from a bassier sound to a more trebly one.

So this is a nice clear definition. The trouble is that it often blends into the next, much more general meaning…

If I had to pick two of the meanings we’ve been discussing as the most common, it would be “tone” meaning “a note” and this one: “tone” meaning the overall quality and nature of a sound.

You hear this one for example as:

“Donna Schwartz’s course has really helped me get a fuller and more versatile tone from my sax.”

I think it’s guitarists and wind players who talk most about tone, but you’ll hear it among bassists, singers and all instruments and genres, really. In fact at Musical U we previously published a whole series called “Bass Tone” which discussed not just the bass/treble type of tone, but all of the aspects that go into the sound you produce on bass, from the instrument to the amp to the settings to the playing style to the effects pedals you use.

So this meaning of tone is really all-encompassing. And to a large extent it should more accurately called “timbre” which is the traditional word for the quality of a sound produced by an instrument or in music. If a saxophone, a guitar and a piano all play a middle C note any listener can hear that the instruments aren’t the same. And what they’re hearing is the characteristic timbre of each instrument. Which we might informally call the “tone”. In practice we tend to use “timbre” to mean an instrument’s natural sound and “tone” to mean the things you control to bring out the best possible sound from the instrument. But it’s a fuzzy one and you’ll hear both words used for both.

In an ideal world I think I’d recommend avoiding this one, sticking with “tone” to mean bass versus treble, and using that odd-sounding French word “timbre” or even just “sound” to refer to the overall quality of a musical sound. But this use of the word “tone” isn’t going away any time soon!

So those are 6 meanings of the word “tone”. To quickly recap:
– “A tone” can mean simply a note. It can mean a pure sound consisting of a single frequency. Or it can mean the interval between two notes that are separated by a whole step, or major second, two half steps.
– “The tone of a sound” can mean how accurately it’s on pitch and in tune (though it probably shouldn’t be used to mean that). It can mean the balance of low frequencies and high frequencies in the sound, how bassy or trebly it is. Or it can mean the overall character of the sound, what is perhaps more correctly called its “timbre”.

Next time you hear the word “tone” or use it yourself I hope you’ll feel much clearer about which meaning is being used. And although you probably won’t make any friends by going around correcting people, you might like to avoid using the “tone meaning just a note” and the “tone meaning sharp or flat” meanings and sticking to the other, more clearly defined meanings: “tone as a pure frequency”, “tone as a particular interval”, “tone as the balance of bass and treble” and “tone as the overall character of the sound an instrument produces”.

I know this is a word that confuses a lot of musicians – so I hope that it’s been helpful for you. And if you know of any meanings of the word “tone” that we haven’t covered in these episodes, please let me know. Shoot me an email at hello at musicalitypodcast.com.