3 Lessons on Music Practice From The World’s Top Bassists 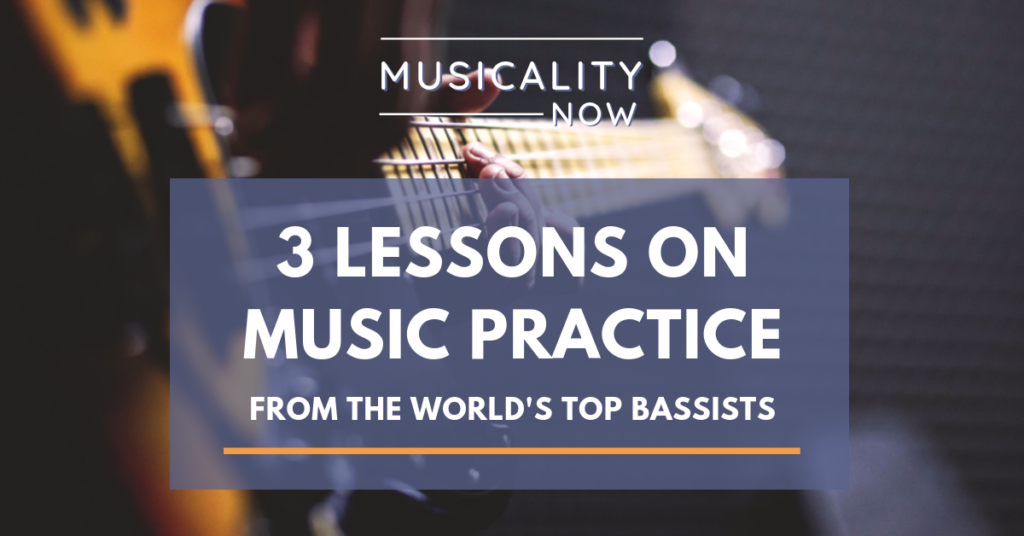 Have you found yourself losing enthusiasm for music practice? It might sound surprising, but whatever instrument you play, it’s possible that the musical role played by bassists actually gives them a unique insight into how to keep practice interesting and effective…

In this episode we’re going to share three big lessons from three of the world’s top bass educators. Stay tuned!

Watch to the episode:

Hi, my name’s Christopher, I’m the founder and Director of Musical U, and this is Musicality Now.

Recently I sat down with Scott Devine, founder of Scott’s Bass Lessons, the biggest bass education website by far, to interview him for the show. And if you missed that episode, go back and listen now because there were a ton of valuable lessons in there.

But there was one lesson that really stuck out to me, on the subject of music practice. And as I thought about it after the interview I was reminded of two other impactful lessons about music practice that have come up for me in the last few years. And I realised that both of those came from bass players too!

Just a coincidence? Maybe. But as you’ll hear when I share these lessons, it’s also possible that the strict and formulaic role the bassist often plays actually leads bassists to be more exploratory and innovative in the way they practice.

To put it bluntly: if the thing they’re practicing isn’t interesting, they end up finding ways to make it interesting. And this isn’t exclusive to bassists – maybe they’re just an extreme case of what we all experience as musicians.

So here’s the first lesson, from Scott Devine. We were talking about what sets the great bassists of the world apart from the hobbyists and even the “good” professional-level players.

And he said it seems to boil down to the way they practice.

Specifically, that they have an intense focus and determination. But what’s fascinating – and encouraging for all of us as musicians – is that he said this isn’t about some brutal, grueling process they force themselves through.

That focus and determination actually comes from a child-like curiosity and enthusiasm.

Have you ever had that experience where you discover something new in your musical life that just grabs you. Maybe a new artist, a particular song, a new style of music or technique on your instrument. And you’re so intrigued and excited about it, you go deep. You cast aside all the things you’re “meant” to be practicing, you somehow carve out lots of extra little bits of music practice time here and there because you just can’t help yourself.

That’s what we’re talking about here. It’s like instead of having to push yourself forwards step by step you’re insted being pulled forwards effortlessly by the thing you’re excited about.

That can happen with something small – like I said, a particular piece of music or new technique – or it can happen with some fresh big-picture motivation like joining a new group, committing to a concert date, or defining a really inspiring “big picture vision”. Check the shownotes for a link to a couple of past episodes on goal setting for more on that.

So this is a big lesson: that the secret to becoming truly great – or even just to improving consistently over time – isn’t about forcing yourself through a painful grind – it’s about tapping into that childlike enthusiasm that means the work no longer feels like work at all.

That leads on to lesson number two which came from Adam Neely, music theory YouTuber supreme and faculty member at the Scott’s Bass Lessons Academy.

In our interview one of the stand-out points was that when talking about how he practiced to get so good on bass Adam said he never held back from following his intellectual curiosity. Although he was spending hours practicing, even simple scale drills got transformed into continually-varied exercises. He felt no obligation to practice the same thing in exactly the same way again and again.

Repetition is important for learning, but that doesn’t mean that the overall practice has to be mind-numbingly same-y throughout. Normally you find that there’s some independent part of what you’re practicing that you can freely vary.

This is an incredibly important idea for a couple of reasons.

The first is that it helps keep your brain engaged. Particularly if you’re an intellectual type of person whose brain is always churning away, it can be hard to force yourself to do mindless repetition – and you end up in that world of relying on pure self-discipline and the painful grind. By allowing yourself to find ways to explore and experiment as part of the exercises and drills you’re able to keep your brain focused throughout, and that naturally leads to much more efficient learning.

The second reason this is a big idea is what ties in with Scott’s lesson about childlike curiosity: when you spice up your practice like this it’s just going to be more fun! And if you’re coming from the ultra-rational mindset that can seem like a wasteful indulgence – but in fact it both aids effective learning and helps you keep up your motivation over time. The importance of enjoying music practice should not be underestimated! In fact we dedicated a whole past episode to how you can improve and enjoy your music practice, I’ll put a link to that in the shownotes.

So that was the big lesson from Adam Neely: that mixing things up in your music practice can lead to more enjoyment and more improvement, not less.

The third lesson was from our own Resident Pro for bass here at Musical U, Steve Lawson. Steve is a prolific and celebrated solo bassist whose work is almost exclusively improvised.

I’ve had the benefit of taking a number of 1-on-1 private bass lessons with Steve and it’s no exaggeration to say he flipped my idea of music practice completely on its head.

I came from a world of scales and exercises and learning sheet music note-by-note growing up – and although I’ve moved away from that into a more free and creative identity as a musician over the years, in large part through my own musicality training, I definitely still had that model in mind that music practice means sitting down for half an hour and running through a checklist of the things you were meant to do. And without those lessons from Scott and Adam we’ve just talked about, there’s a huge risk there that your enthusiasm is rapidly drained and your progress stalls.

Now there’s lots we could discuss about how to improve that traditional music practice session, like leveraging deliberate practice, interleaved practice, mixing things up like we just discussed, having a clear vision to inspire you, suitable support and guidance, and a ton more.

But what I wanted to share here was the mindset shift Steve clued me in to, which is compatible with all that – but utterly transforms the experience.

I would show up to my lessons with some particular technique or idea I was struggling with, and subconsciously expecting Steve to hand me a set of exercises and maybe a piece or two that I could go away and drill away on to master the thing.

Instead, every time I would show up, Steve would listen to what I was coming in with. And then we’d have fun playing music together for an hour!

Somehow he immediately transformed whatever nugget I came in with into not a set of exercises, but an improvised composition of some kind that we could explore together. And he’d send me away not with homework of doing twelve exercises ten times each – but with these interesting ideas for how to begin improvising in a particular direction or context – and normally a list of recommended listening to go away and enjoy too!

And here’s the thing: this wasn’t a distraction from what I’d come in wanting to learn. What we played together was always centered around the technique or the concept that I’d wanted to improve on. And what Steve showed me was that wanting to improve at something doesn’t need to mean sitting down and throwing yourself directly at that thing again and again in a dry, scientific way. In fact, it can mean sitting down and making some music, and featuring that thing in your creative music-making.

Now this idea wasn’t new to me. In fact you’ll find past episodes of this show talking about including creativity at the core of your music practice and it’s a big part of our teaching at Musical U. But my respect for Steve and our lessons together gave me a chance to really internalise and use this in a much deeper way than I had before.

I’ll confess: this is all stuff I’m still working on myself. I think I had too many years of the old approach, so over time I still trend back towards that brute-force disciplined approach and feeling guilty if I enjoy my music practice!

But I try to keep these three lessons front and center and return to them often:

Put together, these give a clear message that the most effective music practice is exciting, it’s interesting and it’s creative.

So the next time you find yourself feeling less than enthusiastic about sitting down to practice, ask yourself which of these might be missing.

Are you tapping into what genuinely excites you in music?

Are you finding ways to vary your practice to keep your brain 100% engaged?

And are you making sure that the notes you play during music practice are actually making music?

Take on board these three lessons from some of the world’s top bass instructors – and I think you’ll find you have a lot more success and delight in your music practice.

And the next time you see a bass player at the back of the band playing root notes – maybe give them a bit more credit. They just might know a thing or two about music practice that we could all do with learning…